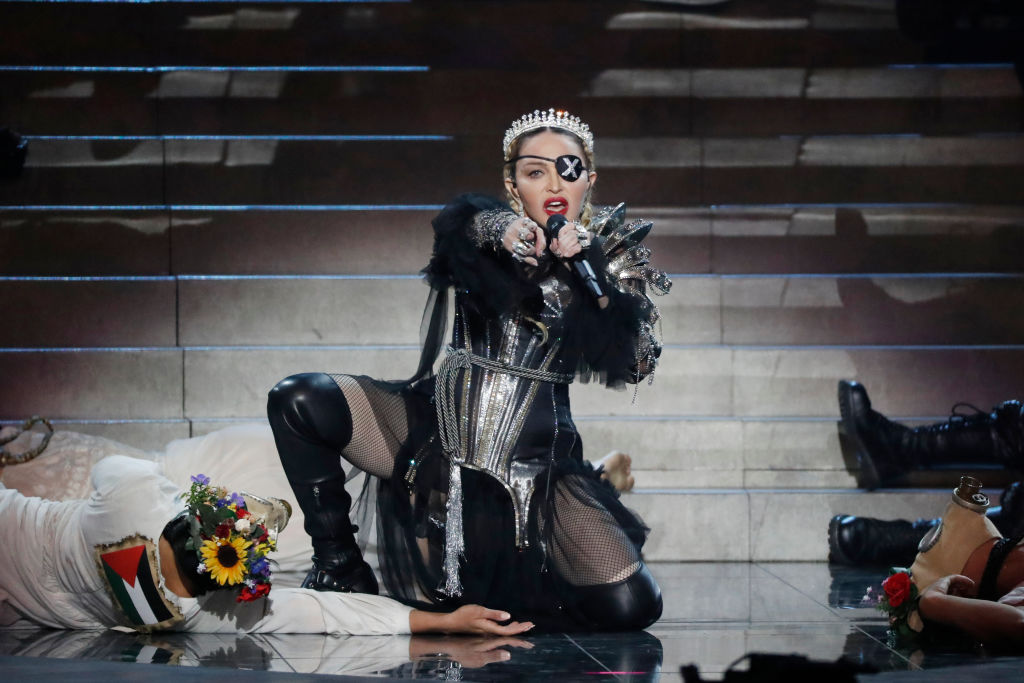 More than 30 years after Madonna shocked with her controversial performance of “Like a Virgin” at the 1984 MTV Video Music Awards, the singer is still out to disturb the peace.

“It’s interesting because peace is subjective,” she told V Magazine in an interview published Friday. “The way people think about the pandemic, for instance, that the vaccination is the only answer or the polarization of thinking you’re either on this side or the other. There’s no debate, there’s no discussion. That’s something I want to disturb. I want to disturb the fact that we’re not encouraged to discuss it. I believe that our job [as artists] is to disturb the status quo. The censoring that’s going on in the world right now, that’s pretty frightening. No one’s allowed to speak their mind right now. No one’s allowed to say what they really think about things for fear of being canceled, cancel culture. In cancel culture, disturbing the peace is probably an act of treason.”

As the “Vogue” artist sees it, speaking up is always better than remaining silent.

She named Kanye West‘s latest album, Donda, as the only thing she’d heard lately that inspired her. He’s “working toward failure,” which she said all artists should be doing.

“I can’t say that I agree with all of his politics and the way that he thinks of women, or unmarried people having sex, or the gay community,” the gay icon said. “But his work is on the razor’s edge, and it’s inspiring and it’s rare. Everybody was waiting so long for his record to come out and then finally when it came out, everybody else’s record came out, too. And he still stood out.”

She was asked about how she felt that West had worked with DaBaby on the album, following homophobic comments he made at a concert. (He’s since apologized to the LGBTQ+ community for his “misinformed,” “hurtful and triggering” words.)

“I was conflicted about that, but, like I said, I have to pay attention to the message, not the messenger,” Madonna explained. “That’s important. Listen to the teachings. Don’t get caught up in the teacher, what the teacher’s doing.”

At 63, Madonna plans to keep talking. And singing. And dancing. That’s what she does in her concert film Madame X, which captures her 2019 theater tour of the same name and was released earlier this month on Paramount+. She noted that she could have chosen to do another stadium run for a whole lot more money, but she opted for a more intimate experience with her fans that required smaller venues, which meant less potential revenue.

“Well, first of all, everyone told me not to do it because it was too ambitious,” Madonna said. “Because there were too many people on the stage. I was trying to tell too many stories. I was trying to share too much of the things that I love in one space and time.”

She, of course, went ahead anyway, which wasn’t easy for a woman who, if she weren’t a global superstar, would likely be considering retirement.

“I don’t even think about my age, to tell you the truth. I just keep going,” she said. “Even when I performed almost my entire tour in agony, I had no cartilage left in my right hip, and everyone kept saying, ‘You gotta stop, you gotta stop.’ I said, ‘I will not stop. I will go until the wheels fall off.’ And it was COVID that shut us down in Paris when we still had 10 days left of shows and I was going to keep going. I didn’t care how much it hurt.”

The last thing she wants to do is hang up the microphone.

“I don’t ever think about the limitations of time and when I should be stopping. I only think about it when extremely ignorant people say to me, ‘Don’t you think you’ve earned the right to just sit back and enjoy all of your success and all things that you’ve achieved and retire?” Madonna said. “Not retire, no one would dare say that word to me. I say to them, ‘Wait a second. Why do you think I do what I do?'”