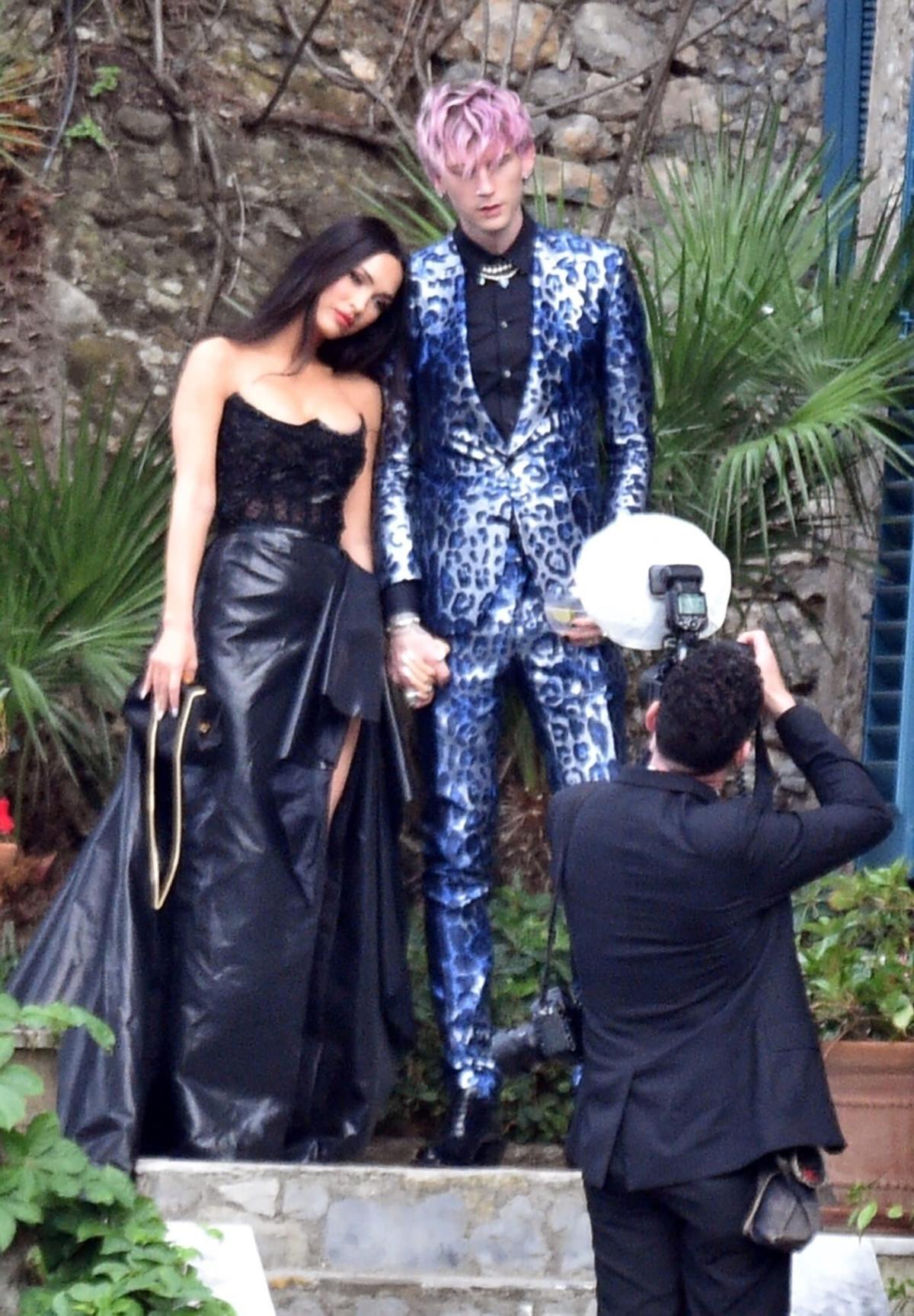 Kourtney Kardashian and Travis Barker‘s wedding was a punk-rock affair!

On Sunday, the reality star and the drummer tied the knot at L’Olivetta, a villa owned by Dolce & Gabbana in Portofino, Italy, and an intimate group of family and friends — including engaged couple Machine Gun Kelly and Megan Fox — flew in to watch them say “I do.”

The reception was later held at Castello Brown, a 16th-century castle nearby.

Machine Gun Kelly (real name Colson Baker) arrived at the ceremony solo before meeting up with Fox later. He wore a blue leopard-print suit to the black-tie affair, while Fox looked stunning in a black liquid taffeta gown with a beaded corset bodice on tulle from Zuhair Murad’s fall-winter 2021 collection.

All wedding-goers were ferried in on speedboats to the secluded destination.

RELATED: Kourtney Kardashian and Travis Parker Back on the PDA in Italy Ahead of Their Wedding Weekend

At the VMAs in September, Kardashian, 43, and Fox, 36, teamed up to introduce their boyfriends, who were performing Kelly’s single “Papercuts.” They also had a mini photoshoot together in the bathroom that Fox later shared on Instagram.

“I’m a huge fan of this next performer. I’ve watched him grow, and not just as an artist, but also as a person,” Fox said onstage ahead of the performance.

Kardashian, giving a shout-out to Barker, added, “I’m a fan too, and I think his drummer is super hot,” before Fox told the crowd, “New York, I need you to get extra loud for our future baby daddies.”

That same month, Kardashian and Fox posed topless together for a SKIMS campaign.

“I love that SKIMS really understands what women want to wear and that they want to feel sexy, confident and empowered,” Fox said of the shoot in a press release at the time. “I loved being in this campaign with Kourtney, we had so much fun shooting together.”

Kardashian added: “I had so much fun shooting with Megan for the campaign. SKIMS really is my favorite for my undies, bras and basics — I think I would say that even if Kim weren’t my sister!”

“They had to legally get married first ahead of their big Italian wedding, which is happening very soon,” the source told PEOPLE. “All the details are set and the whole family, including all the kids, are very excited.”

In April, the pair had a “practice wedding” complete with an Elvis Presley impersonator, who officiated the ceremony, in Las Vegas following the 2022 Grammys. Kardashian later confirmed that they didn’t have a marriage license for the intimate affair.

Kardashian and Barker got engaged in October 2021 on the beach in Montecito, California. The pair had been dating for less than a year when the rocker got down on one knee. The moment was captured for The Kardashians on Hulu, and the celebration continued after with a surprise dinner for both their families.