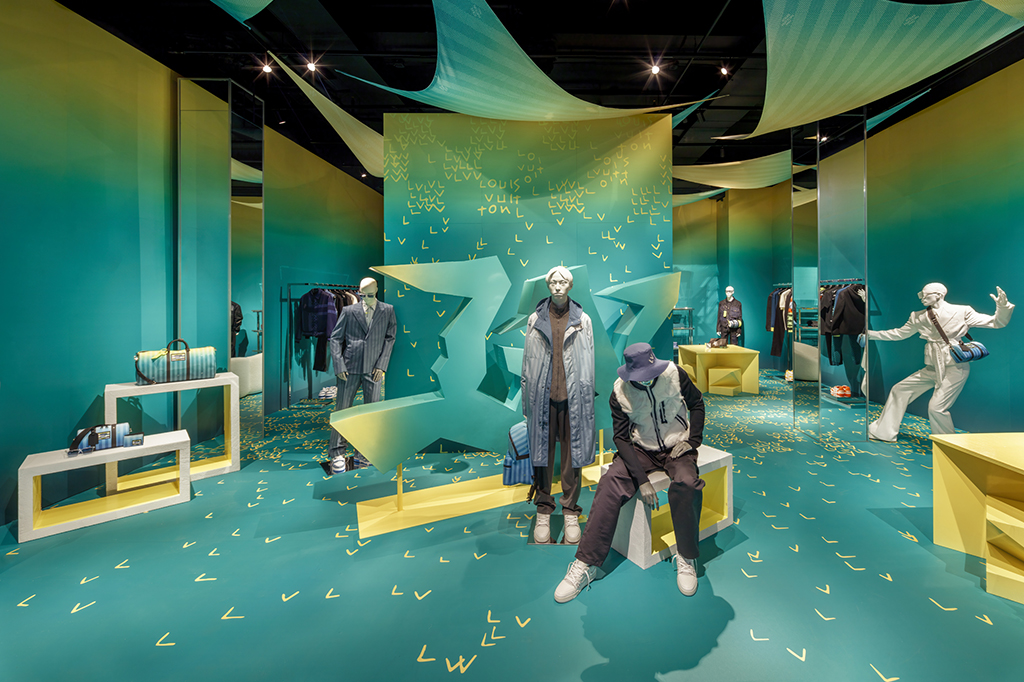 Located at 104 Prince Street in Manhattan’s SoHo neighborhood, the shop offers a range of men’s items from the “Daybreak” capsule within the larger men’s pre-fall 2022 collection.

Now open through early June, visitors to the shop will find a healthy selection of ready-to-wear items from the capsule, including outerwear, knitwear, jersey T-shirts, hoodies, and suiting. Classic men’s leather goods like the Keepall and Avenue Slingback, reimagined with a patchwork of colors, patterns, and materials of the collection, also make a statement at the store.

As for shoes, both Runner Tactics and Abloh’s coveted LV Trainers are on offer, the latter’s strap detailing playing with the traditional idea of a formal shoe. Belts, eyewear, hats, and LV Sunrise jewelry are also available.

As for the store’s design, kites covered in stripes identical to those that lined the Maison’s historic trunks – a key motif of the collection – adorn the ceiling. A yellow-to-green gradient covers the walls, with a graffiti-style reinterpretation of the signature Louis Vuitton “LV” initials erected at the center of the space and individualized yellow “L” and “V” letters cascade down from the center wall onto the floor.

“My philosophy is very much informed by the clothes that people actually wear,” Abloh once said when describing his pre-collection procedure. “What I do is an analysis of a generation: what do people buy and why do they wear it? That question naturally creates an equal interest in tradition as it does in changing tradition. But it’s also about challenging myself and exploring different land. That is creative freedom.”

This is the latest men’s pop-up to occupy the 104 Prince Street space. In January, Louis Vuitton transformed the store for its spring/summer 2022 collection, which was revealed in Miami just days after Abloh’s passing.

January also saw the unveiling of a 10-story mural of Abloh on the façade of Louis Vuitton’s Fifth Avenue flagship.