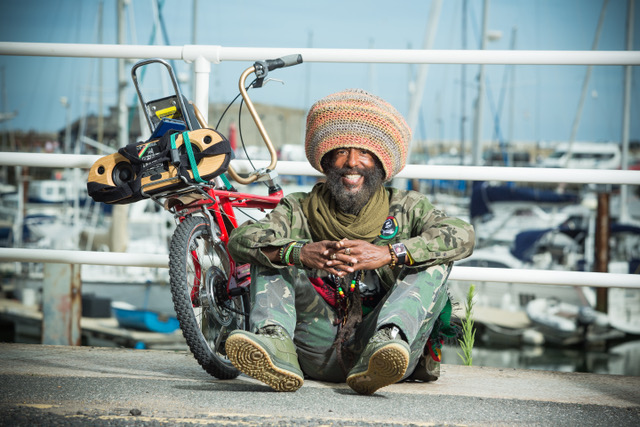 When you talk about classic drum & bass, there are few as legendary or enduring as Congo Natty. With a five decade deep discography spanning seminal and timeless releases like Junglist, Under Mi Sensei, Get Wild, Kunta Kinte, Jah Sunshin’, Original Ses and more, Congo Natty has played a founding and hugely influential role in one of the most phenomenal, boundary breaking music movements the UK has ever known.

Already backed by 6Music, BBC Radio 1, Rinse FM, NTS and more, Congo Natty unleashes Ancestorz (Rootz Of Jungle) for the world to cherish and a reminder of the genre’s ongoing, influential and versatile legacy. Staying true to its name, the album is an ode to the origins of the genre Congo Natty has revolutionized in the U.K. and beyond, dedicating each song to ruminations on jungle’s intersection with identity and nationality. Reflecting on the genealogy of the genre, track “Exodus 1: 7” (feat. Fallie Nioke, Kaya Fyah, Marque Gilmore, Reggie Stepper, Orphy Robinson) opens with the declaration “This is England style Reggae – jungle music” before hypnotizing with masterful layers of overlapping vocals, percussion, and spoken reflections. The listener is effortlessly led on a journey to the stripped-down poetic woodwind musings of flute solo “Navaho Flute” (feat. Biscuit), an elegant preliminary initiation into a richly diverse tour de force.

Despite its 32-track length, Congo Natty’s most in depth project to date refuses waste time or cut corners, clocking in at just over 2 hours of music (plus a 2-hour continuous mix), carefully retaining beloved elements of reggae and crisp wind instruments present on tracks such as “Zanziba,” an artistic soother that glows with the warmth of funk temptations and warbling dub riffage. Meanwhile, “Jungle Starliner” takes it up a notch with thunderous bass lines starving for a massive sound system. At its core, the entire album is hungry for expression, begging you to move your body with its formidable jungle callings.

Representing the global diaspora and giving a voice to the people on the new album, Congo Natty tells the most important story jungle music can tell whilst documenting the uprising and reflecting on where mankind, culture and the journey is at in 2022. He now looks to pass the torch to the producers he’s championing in the recent resurgence of jungle music.