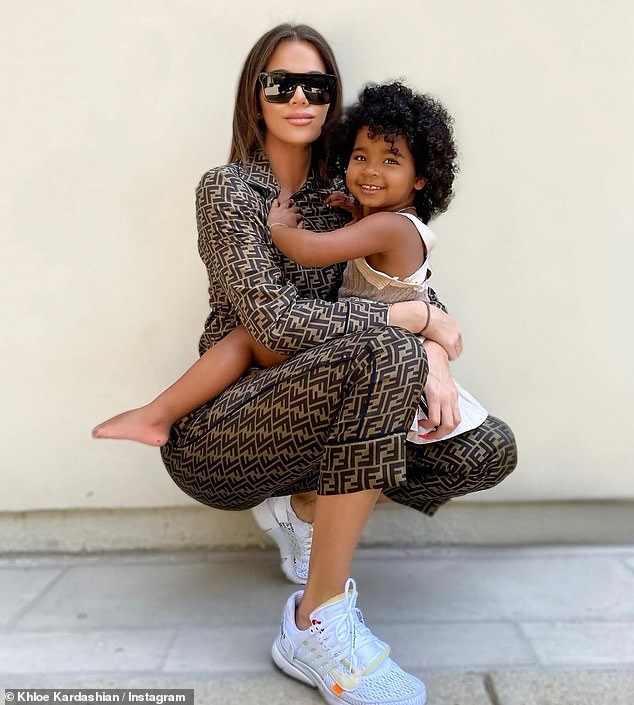 Khloé Kardashian announced Friday that she and her daughter True Thompson had come down with COVID-19 again.

The 37-year-old Keeping Up With The Kardashians star shared on social media that the two had ‘tested positive,’ requiring her to cancel her schedule.

However, she stayed positive and said the would ‘all be OK’ thanks to her vaccination.

Health scare: Khloé Kardashian announced Friday that she and her daughter True Thompson, three, had come down with COVID-19

‘Hi guys I wanted to let you know True and I tested positive for Covid,’ she shared on Twitter and in her Instagram Stories. ‘I’ve had to cancel several commitments and I’m sorry I won’t be able to make those happen.’

Khloé referenced that fact that the vast majority of fully vaccinated people who get breakthrough infections don’t require hospitalization as a reason for optimism.

‘Luckily I have been vaccinated so all will be ok,’ she continued. ‘We will be over here in quarantine and following current guidelines.’

Although three-year-old True is still too young to be vaccinated, COVID-19 tends to be less severe in young children. 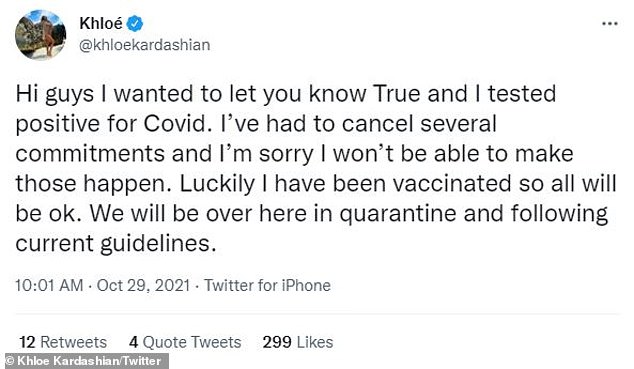 Vaccinated and safe: She sounded optimistic in her tweet, as she was fully vaccinated and likely protected against illness severe enough to require hospitalization

It’ll be OK: Khloé added a hopeful note in a follow-up tweet, writing, ‘Be safe everyone!’

Khloé added a hopeful note in a follow-up tweet, writing, ‘Be safe everyone!’

This is the second bout with COVID-19 for the reality star, who previously revealed that she had been sick in March 2020, as the pandemic spread across the globe.

During a Twitter Space chat from September, she revealed that her sense of taste and smell, which is commonly lost by COVID sufferers, was ‘the only thing that I didn’t lose,’ according to Page Six.

She added that she had most of the other major negative side effects, ‘like anything else you can imagine.’

During her illness, which was eventually shown on the final season of KUWTK, she suffered from significant hair loss, and she complained on Twitter that losing her length was ‘really a struggle for a minute.’

Some of her more painful symptoms were headaches that dwarfed the migraines she was used to.

‘I suffer from migraines, but this was the craziest headache,’ she said in a self-shot video shown on the series. ‘I wouldn’t say it was a migraine. The coughing, my chest would burn when I would cough.’ 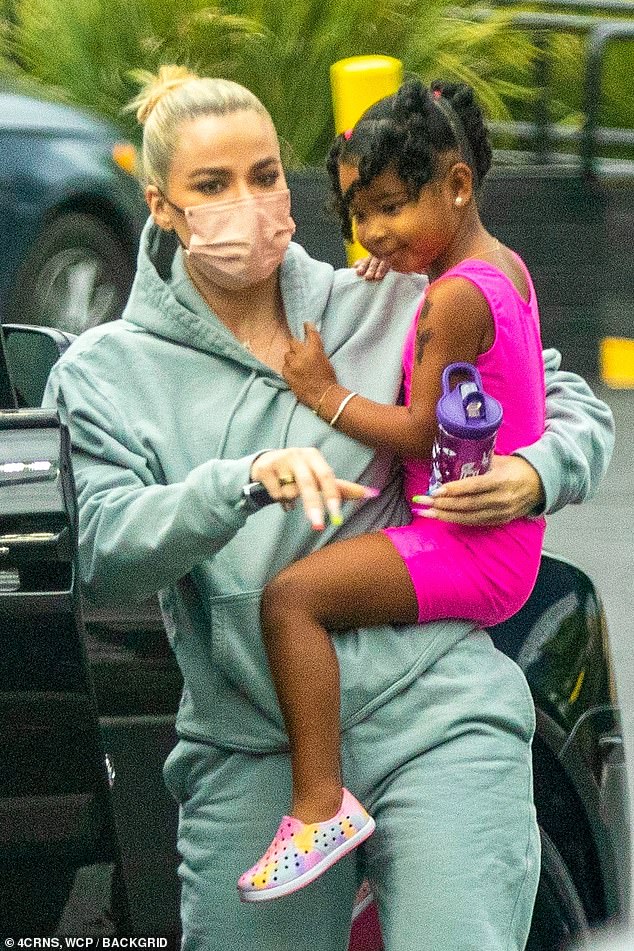 Bad luck: This is the second bout with COVID-19 for the reality star, who previously revealed that she had been sick in March 2020, as the pandemic spread across the globe

In addition to suffering from the chills, she also had to deal with violent vomiting.

‘Let me tell you, that s**t is real. But we’re all gonna get through this,’ she said.

Though she stayed optimistic the first time, no one in the world at the time had been vaccinated, so Khloé wouldn’t have known if her illness could become serious enough to require hospitalization.

Khloé wasn’t even the only person in the Kardashian–Jenner clan to test positive for the novel coronavirus.

In May, her older sister Kim, 41, revealed on KUWTK that her entire family had been sickened by the virus.

She initially shared that she and her son Saint, five, had tested positive, but the symptoms soon swept throughout the household.

Her oldest daughter North, eight, began to show symptoms and soon tested positive, as did her daughter Chicago, three, and son Psalm, two. 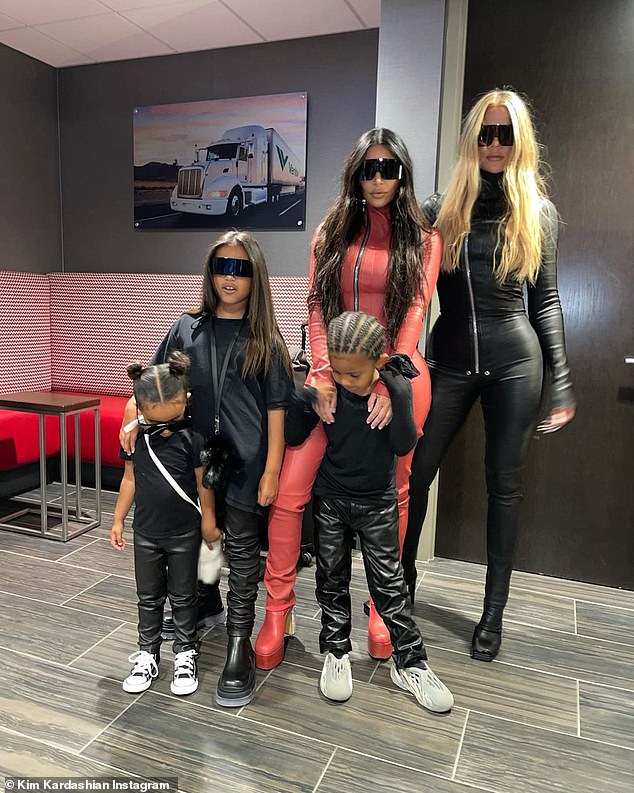 Under the weather: Khloé’s sister Kim Kardashian and all four of her children previously tested positive for COVID-19 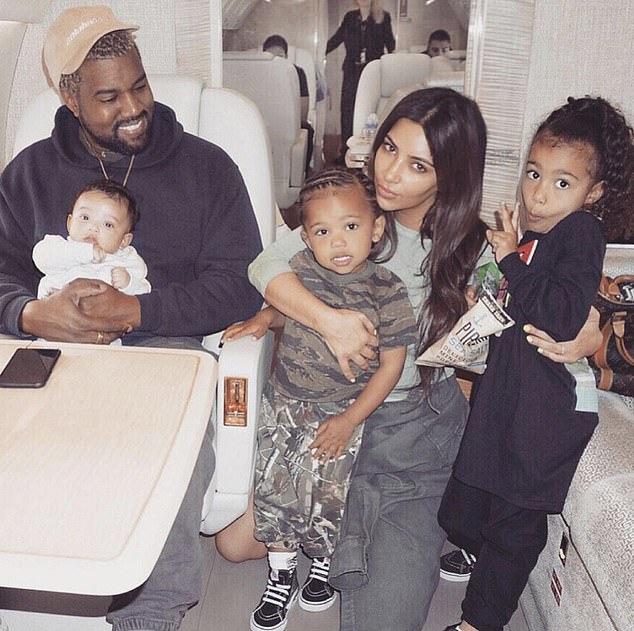 Got them all: In July 2020, Kim’s estranged husband Kanye West revealed in a Forbes interview that he had also been sick with COVID-19 early in the pandemic

In July 2020, Kim’s estranged husband Kanye West revealed in a Forbes interview that he had also been sick with COVID-19 early in the pandemic.

‘Kanye had it way at the beginning, when nobody really knew what was going on,’ Kim said later in an interview with GRAZIA. ‘It was so scary and unknown.’

Because their staff had been sent home, she ‘had to go and change his sheets and help him get out of bed when he wasn’t feeling good.’

The reality star added that ‘changing his sheets with gloves and a face shield was really a scary time.’

‘I remember someone had told me Drake had the coronavirus and my response was Drake can’t be sicker than me!’ Kanye joked to Forbes about the illness, referencing his beef with the Certified Lover Boy rapper.