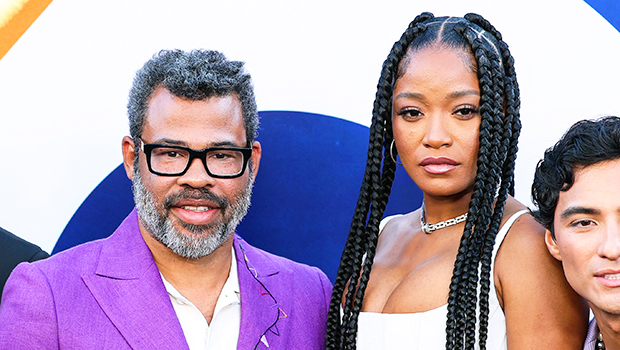 Keke Palmer, 29, received some sweet advice from one of the best as she prepares to host Saturday Night Live for the first time on Dec. 3. The actress spoke with comedian and director Jordan Peele, who directed her new movie, Nope, about the once-in-a-lifetime gig and he gave her some sound advice. Jordan famously almost became a cast member on the sketch comedy series when he was offered a place on the roster in 2008, but couldn’t get out of his contract with MADtv.

“He definitely has given me some [advice]. I hit him [up]. Yeah, because we talk, and I definitely was like getting in his mind, like, ‘what he thinks would be cool and funny.’ And he always has given me like little sideline things,” Keke EXCLUSIVELY said to HollywoodLife when discussing her partnership with Doritos for its Big “Dip” Campaign about its new line of Doritos-flavored dips and Big Dip Energy giveaway. “I’ll wait just in case we use anything or do anything that I want to tell. But he’s always there when I need them. I love him.”

In addition to talking about Jordan’s SNL advice, Keke commented on seeing his new movie, Wendall & Wild. “[It was] very good. And it was cool to see him again in the performer position, even though it was animation. It was still cool because, you know, he doesn’t give us that too much more anymore,” she said.

As far as whether or not she’s nervous to take the stage at SNL for her hosting duties, Keke admitted “there are nerves” but she knows how to get through them. “I’m the kind of person whose nerve meter is shocked to the core,” she explained. “Like I’d already put it through so much that it’s kind of stunted in terms of what it feels. But I still definitely get that adrenaline rush. Like, it’s definitely an adrenaline rush.”

“And it’s just like, you know, ‘whoo, I’m ready to go! So I definitely feel like — I’m just waiting to get to that week of getting into what the materials are and getting to the rehearsals and just into the fact that hey, we’re going to be doing Saturday Night Live,” she continued. “Like, what am I going to be doing in this format? I’m just very excited about it. But, I know that it’s gonna be fun. And honestly, Saturday Night Live is such a well-oiled machine. I’m just excited to just, you know, fit right into it.”

During Keke’s SNL hosting episode, the musical performer will be SZA, but the talented singer said she would have been willing to be both the host and the performer if her album was out. “[SNL] just came a little too early. If they would have just waited a little bit, I would have my album out,” she said. “But they, you know, they just wanted me too quick. So that means that next year, they have to have me back. That’s all that means.”

Black Star: 5 Things To Know About Rap Duo Reuniting To Perform On ‘SNL’ This Week

Despite not performing herself, Keke, who announced her SNL appearance in an Instagram post on Nov. 12,  is super excited to see SZA. “First of all, I love SZA. I can’t wait to see what she’s going to perform. … ‘Shirt,’ and I know this isn’t her song, but she makes the song for me,” she said before singing Doechii and SZA’s song “Persuasive.” “‘She’s so persuasive, that marijuana’ And SZA’s like, ‘take me to paradise!’ I love the little ad-lib that she gives. It’s my favorite little ad-lib that she gives! She ad-libs down, honey!” she exclaimed.