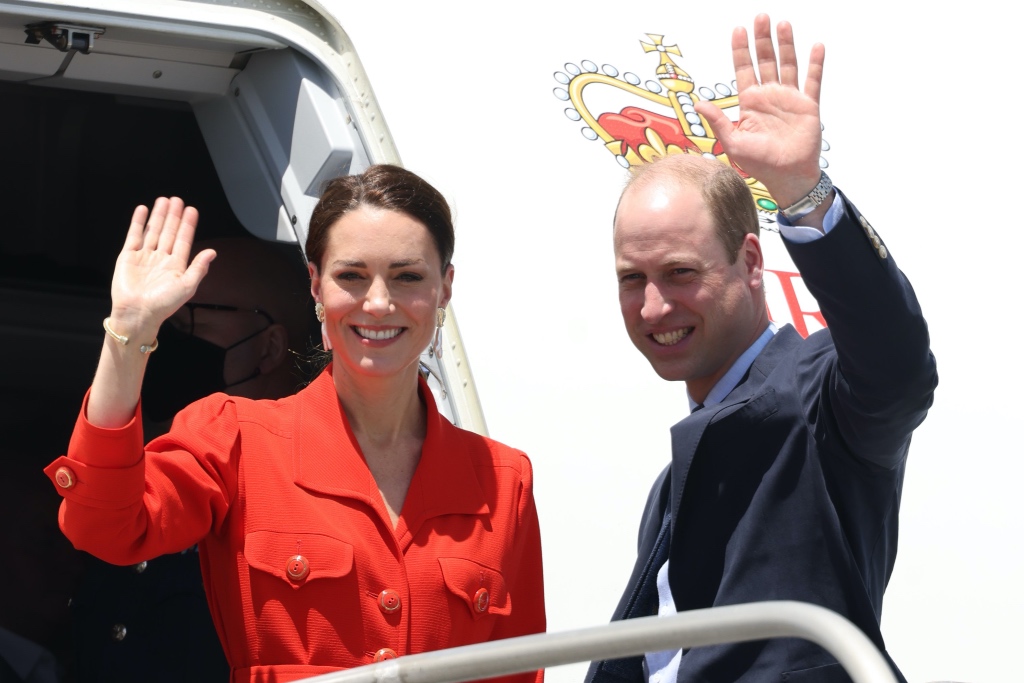 Kate Middleton and Prince William have officially concluded their Belize visit during their Caribbean Royal Tour, leaving from Philip S.W Goldson International Airport on Tuesday afternoon. The duo’s eight-day tour will include additional visits to Jamaica and the Bahamas on behalf of Queen Elizabeth. The occasion — notably similar to the Queen’s first visit to Jamaica in 1953 — will also be a prime opportunity for the pair to champion causes like the Earthshot Prize.

For their departure, the Duchess of Cambridge wore a pair of sharp white trousers. The wide-legged bottoms were paired with a red woven jacket that featured large buttons on its cuffs, front and pockets, as well as a belted waist. Middleton simply accessorized with a thin gold bangle, gold earrings and a white leather top-handle handbag — plus her sapphire and diamond engagement ring, which originally belonged to the late Diana, Princess of Wales.

When it came to shoes, Middleton paired her breezy look with a pair of white heels. Though the style wasn’t fully visible beneath her pants’ hems, the duchess’ footwear appeared to feature leather uppers, pointed toes with gold straps and cutouts and stiletto heels totaling at least 3 inches in height. The style streamlined her look while sharply coordinating with her minimalist jewelry, allowing the jacket to stand out and make a chic statement.

Middleton’s ensemble was worn for her third day on tour. The duchess kicked off the Caribbean tour with William on Saturday, arriving in Belize in a blue lace Jenny Packham dress with matching Emmy London pumps. Her style streak continued with a blue Tory Burch floral dress and Stuart Weitzman wedges, as well as a pink sequined gown by The Vampire’s Wife.

For footwear, pointed-toe pumps have become one of Middleton’s go-to styles — particularly by British brand Emmy London. Middleton is also a fan of Gianvito Rossi’s 105 pumps, which she owns in five colors, as well as Jimmy Choo and Stuart Weitzman heels. When she’s out for more casual events, the duchess wears affordable sneakers by brands like New Balance, Adidas, Superga and Zara.

Click through the gallery for more of Middleton’s chic style moments throughout the years.