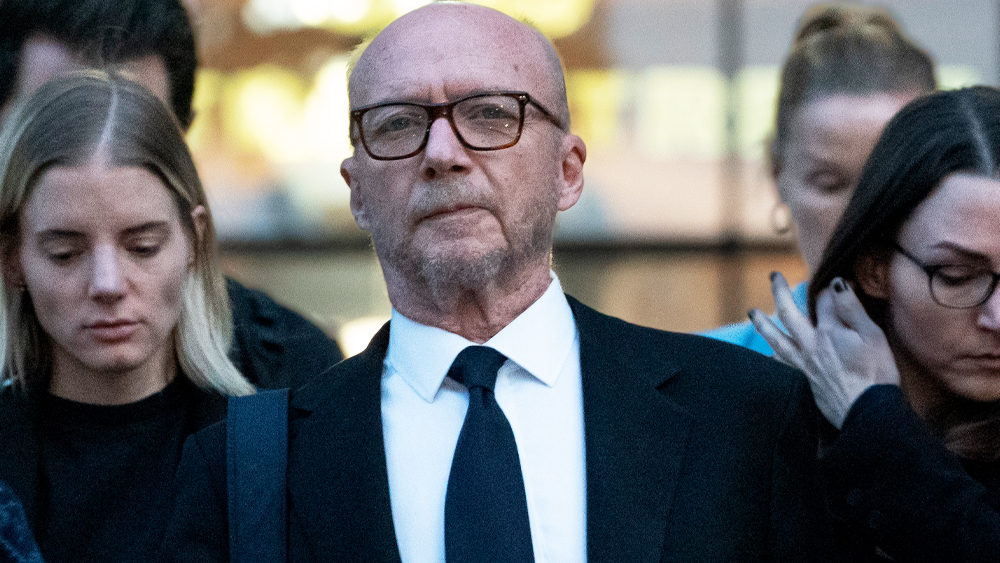 UPDATED with punitive damages, 1:45 PM: The jury in Paul Haggis’ sexual assault civil trial today ordered him to pay $2.5 million in punitive damages to plaintiff Haleigh Breest. Added to the $7.5 million it awarded Thursday, when he was found liable, the Crash double Oscar winner now faces $10 million in damages.

Read details of the case below.

Outside court, Haggis vowed said: “Today the jury learned what the opposing counsel has known for years, which is that I’ve spent all the money I have at my disposal. I’ve gutted my pension plan. I’ve lived on loans in order to pay for this case in a very naíve belief in justice. Well, now we’ll see what the appeals court will say. Because we will absolutely appeal. I can’t live with lies like this; I will die clearing my name.”

His attorney, Priya Chuadhry, said outside the courtroom: “Throughout this trial we were not allowed to tell the jury that Mr. Haggis is basically penniless, and now the world knows. And we look forward to clearing his name.”

Breest’s lawyer Ilann Maazel told reporters, “The jury did the right thing,” and her other attorney Zoe Salzman said, “Justice was done.” Breest made no comments outside court.

PREVIOUSLY, November 10: A New York jury today found filmmaker Paul Haggis liable on all three counts of rape and sexual abuse in his treatment of Haleigh Breest, who left a party in Manhattan with him in 2013 and then sued the Crash Oscar winner in 2017 claiming he repeatedly forced sex on her in his apartment that night.

The unanimous jury of four men and two women — whose makeup changed on the first day of deliberations — deliberated for nearly six hours in the civil trial before awarding Breest $7.5 million in compensation. It also recommended punitive damages, the amount of which will be decided Monday, November 14.

Seated between his lawyers, Haggis — who faces no jail time because this was not a criminal proceeding — looked straight ahead as the verdicts were read. He then stood with his three adult daughters and hugged one of them, who was crying.

Standing with his lawyer Priya Chaudhry and his family members outside the courthouse, Haggis said: “I’m obviously very disappointed in the results. And I’m going to continue to, with my team, fight to clear my name. We’re going to keep our options as to what we’re going to do.”

Breest hugged her lawyers and said as she exited that she was “very grateful.” She later released a statement through her attorneys: “I am grateful that I had the opportunity to seek justice and accountability in court — and that the jury chose to follow the facts — and believed me.  The greatest source of comfort through this five year legal journey has been the support I felt from the women who bravely shared their own stories and let me know I wasn’t alone.”

Breest’s lawyers Zoe Salzman and Ilann Maazel said in a statement: “We’re pleased to see justice served for our client, Haleigh Breest. After the jury heard a mountain of undeniable evidence against Mr. Haggis, they did the right thing and held him accountable for his deplorable behavior. We commend Ms. Breest for the bravery it took to come forward. She stood up for herself and for all women.”

Also in the hallway, Breest paused to hug her former therapist, Catherine Baker-Pitts, who treated Breest in 2017-19 and testified during the trial that Breest was suffering from symptoms of trauma.

“Justice was served,” Baker-Pitts said of the verdict, adding that Breest stepped “out of her comfort zone” to pursue the case, “and she trusted in the system.”

Baker-Pitts, who was Breest’s most visible and often only supporter in the courtroom, said she hopes the outcome will help Breest “restore a feeling of safety in the world,” and inspire “faith in the power of speaking up  — that it was worth it.”

Today’s verdicts were the latest judgment in a spate of cases growing out of a #MeToo movement that has called out powerful men in the entertainment industry as sexual abusers. The jury was asked to decide whether Haggis was one of them. Breest and her lawyers sought to prove that Haggis had forced her to submit to intercourse and to perform oral sex on him and pushed his fingers inside of her even as she said “no.”

She spent four days in total on the stand describing the encounter and defending her interpretation of it against a skeptical cross-examination by a lawyer for Haggis, Priya Chaudhry. In closing arguments on Wednesday, Chaudhry asked jurors to use their “fabulous New York common sense” to see through Breest’s story.

Jurors ruled on three specific charges: first-degree rape and two third-degree charges of sex abuse and a criminal sexual act under New York law. About one hour into their deliberations, jurors asked the judge for several pieces of trial testimony and evidence including texts between Breest and the friend she contacted first, and deposition testimony by Breest and Haggis discussing vaginal sex.

Breest and Haggis both had testified that they went back to his apartment after a movie-screening party on Jan. 31, 2013, where Haggis, then 59, was a VIP guest and Breest, then 26, was working as a freelance publicist. Both agreed that Haggis turned an offer of a ride home for Breest in his hired car into an invitation to his place, and that she deflected the invitation at first by suggesting they instead go to a bar. She then agreed to go home with him but said she wouldn’t stay the night, both testified.

Their testimony diverged from there. Breest said she felt “pressured” to spend time after work with Haggis, a frequent guest at events put on by her boss, who fired her after she filed the lawsuit. Haggis testified that he and Breest had been flirting all night, were genuinely interested in each other and that Breest was playfully letting him know she was open to sex with him even if she wasn’t planning to stay over.

Haggis testified that the sex was consensual and, to the best of his memory, confined to oral sex that Breest initiated. He said that Breest never portrayed the encounter to him as anything else until her lawsuit almost five years later at the height of the #MeToo movement, after Haggis had called movie producer Harvey Weinstein a “predator” as women in the film industry were coming forward with accounts of Weinstein sexually brutalizing them.

He has called the case a vendetta by the Church of Scientology, a secretive and wealthy religious movement founded by a science fiction novelist. Haggis quit the church in 2009 with harsh words for its methods and spoke at length about his journey through and out of Scientology for a New Yorker profile and an HBO documentary.

His defense lawyers did not produce a single witness or piece of documentation in court linking any of his accusers directly to the church, but in closing arguments on Wednesday, Haggis lawyer Chaudhry said jurors should consider the “strong circumstantial evidence” of a Scientology role in accusations that have “utterly destroyed him.”

The jury heard from about two dozen witnesses in all, including Haggis, Breest and four Jane Does — Deadline is not naming them — who said Haggis sexually assaulted them, or attempted to, in separate incidents between 1996 and 2015 after using different ruses to get them alone. They are not parties to the lawsuit against Haggis, but a lawyer for Breest, Ilann Maazel, said in closing arguments that they “give some insight into what his intent really was” when he took Breest home. Maazel called Haggis a “psychopath” who planned and orchestrated his assault of Breest just as he had done with the other four women.

There were dueling experts on memory, trauma and attitudes towards rape victims — both with links to courtroom cases that accused Weinstein and the actor Kevin Spacey of sexual abuse. Two spinal surgeons offered contrasting views on whether Haggis was even capable of initiating forcible sex against someone resisting him physically, given that he was still recovering from an operation to repair two ruptured discs in his back.

Chaudhry, in a grinding, hours-long cross-examination that left Breest in tears, sought to show jurors that the rape as she claimed it happened was equal parts “fantasy,” as Chaudhry put it in closing arguments, and “not physically possible.” She said Breest had multiple opportunities to leave Haggis’ apartment, and instead she spent the night.

Chaudhry depicted Breest as a troubled and emotionally immature woman who mistook “an awkward one-night stand” with a famous, accomplished Hollywood figure for something more, and felt humiliated when he showed no further interest.

Chaudhry said Breest’s texts to friends afterward, and emails to Haggis, show her reaction evolving from excitement at having spent the night with him to confusion at his disinterest, and then regret and humiliation that led her to recast what happened as rape.

One text from Breest read, “As they say in the first wives club don’t get mad get everything,” referencing the 1996 revenge-comedy movie The First Wives Club.

“She’s not upset about what happened in Paul Haggis’ apartment that night,” Chaudhry said. “She’s upset that he never invited her back.”

Jurors also heard from a string of defense witnesses with connections to the Church of Scientology, including the former King of Queens star Leah Remini, who also hosted the Emmy-winning documentary television series, Leah Remini: Scientology and the Aftermath.

Remini and other former Scientologists, including Haggis’ daughter Alissa, told jurors that the church never forgives its enemies and uses litigation and impossible-to-trace covert operations to undermine them. One ex-Scientist, a documentary film producer, said that shortly after Haggis left the church, a high-ranking Scientologist called her for help digging up dirt on him but she refused.

“It’s the perfect defense,” Maazel scoffed in his closing. “There’s no evidence of it, so it must be true.”

An ex-wife of Haggis, singer and actress Deborah Rennard, testified that Haggis was unfaithful and had more than 20 affairs during their marriage but never was violent. Three other women said they remain friends with Haggis even though they rejected his passes or romantic interest.

Haggis himself said on the stand, “I’m a very flawed human being,” but denied raping or attempting to force himself sexually on anyone.