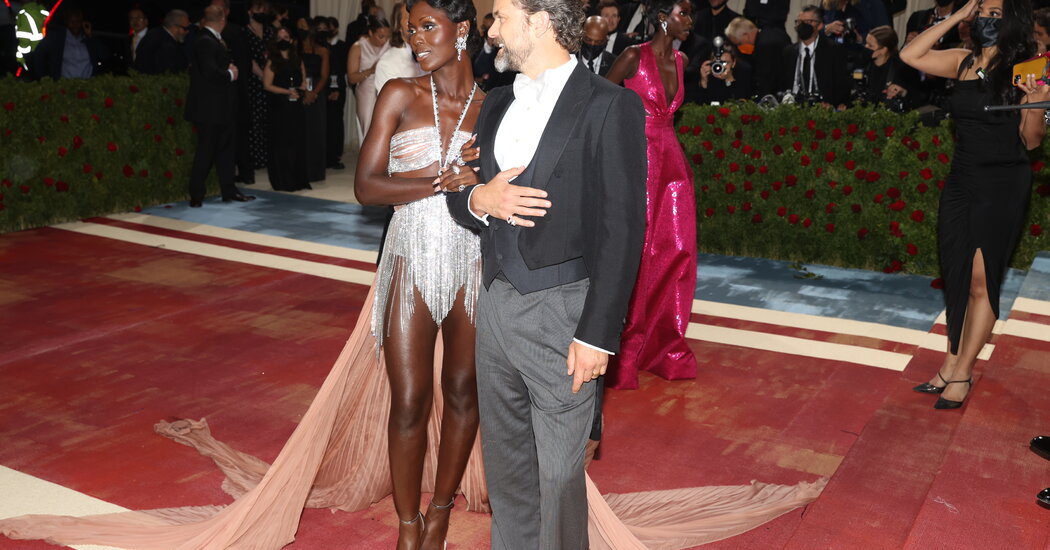 Briefly, in the planning process, Joshua Jackson and Jodie Turner-Smith discussed gender-swapping their looks for the Met Gala.

“I’m not sure I could have pulled off your exact look,” Mr. Jackson said, referring to the Gucci ensemble his wife ultimately wore on Monday night. It was a crystal chain bra and fringed miniskirt layered underneath a much longer pink pleated chiffon skirt. “I’ve got the legs for it, I’d like to say.”

“You have the legs!” Ms. Turner-Smith agreed. “He’s got great legs.”

Even so, Mr. Jackson felt his Gucci look was sufficiently novel. He wore a custom black coat with tails on top of a white evening shirt, gray double-breasted vest and pinstripe pants.

“I’ve never worn tails in my life,” he said. “So it feels, in the proper way that a costume ball should, like I’m actually putting on a costume. But also I just look really good. It’s hard to keep up — you really got to keep it together when you’re standing next to her.”

“I love seeing him dress up,” Ms. Turner said. “He looks damn good in a suit.”

Yes, the actors, who married in 2019, really are this adorable, ribbing and complimenting each other in equal measure, radiating a chemistry that burns through any medium: Instagram post, fashion campaign, Zoom call with a journalist.

While Mr. Jackson has attended the Met Gala several times, Monday was the first time for Ms. Turner-Smith, a Gucci ambassador who said she wanted to channel the “over-the-top and fantastical” energy of the Gilded Age, if not the era’s actual attire. (“My own personal motto: If you’re not doing the most, you’re not doing enough.”) That doesn’t mean she turned to her husband for insight about what the night is really like.

“You don’t think I would give you an accurate description of the joys to come?” Mr. Jackson asked with mock offense.

“You would give me an accurate description of how it’s been boring for you in the past because you’ve never gone with anybody who’s as amazing as me,” Ms. Turner-Smith said, laughing. “It’s kind of like when you have a child, right? You re-experience all of these things, and you see them through your child’s eyes.”

“Are you my kid in this situation?”

“Let me land the plane,” Ms. Turner-Smith said. “In this sense, I’m having this childlike experience, seeing it with new eyes for the first time. So I feel like that’s really going to give him this whole new experience of it.”