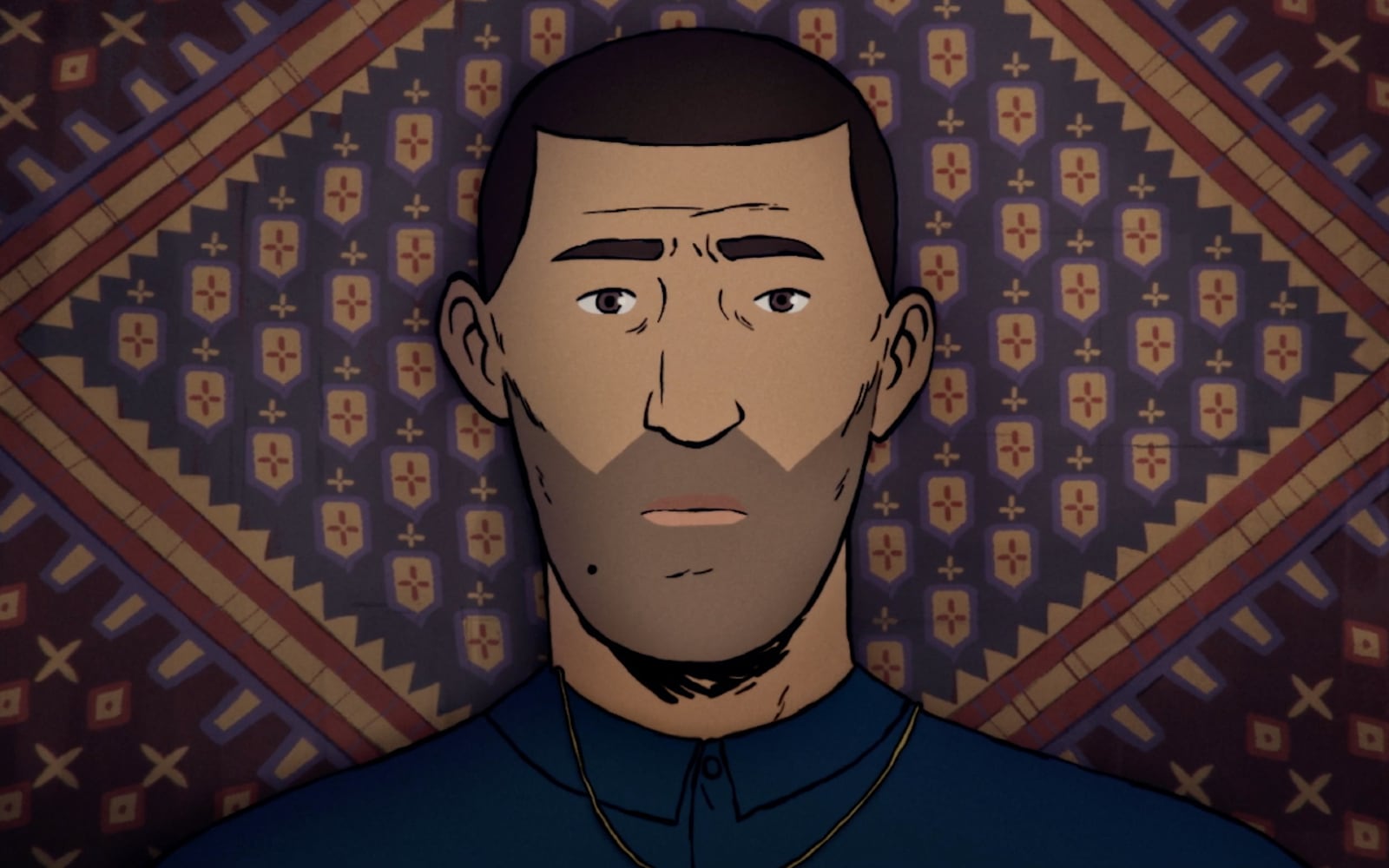 In the opening moments of Flee, a group of figures are shown running as tall buildings crumble around them. Viewers can make out women and children in the crowd, while tense music and body language convey an atmosphere of barely restrained panic. Yet the people themselves are transparent, their forms composed of nothing more than a few black and white lines. And the longer they run, the more they seem to fade away.

Fear and erasure are recurring themes throughout Flee, the powerful animated documentary by Danish filmmaker Jonas Poher Rasmussen. In Flee, Rasmussen turns his gentle gaze toward a childhood friend, an Afghan refugee who uses the pseudonym Amin Nawabi.

On the surface, Amin’s life is a prosperous one. He has a comfortable home in Copenhagen, a loving fiancé, and is about to take up a postdoc at Princeton. Yet the past still weighs heavily on Amin, and through a series of quiet interviews and intimate conversations, we come to understand how refugees like him are profoundly shaped by our willingness to fully see them.

Born in Kabul, Amin recalls how his happy childhood was upended when the America-backed Mujahideen first seized power in Afghanistan. Amin’s father, a military officer, was quickly arrested, and following the near conscription of his older brother, Amin and his family escaped to Moscow. But even there, safety remained tenuous. Russia was in the throes of economic collapse and held little welcome for outsiders. While another brother living in Sweden was able to provide the family with some financial support, it soon became clear that their best hope for survival lay in Scandinavia—a destination that could only be reached by putting themselves into the grip of human traffickers.

The funds demanded for their passage were exorbitant, and the slow, tedious years required to raise the money forced Amin into a life of invisibility. Being seen meant risking deportation or inviting abuse from the corrupt Russian police. Expressing any kind of strong emotion would only bring further strain upon his family and potentially shatter the few relationships he had in a life full of uncertainty. Their fears would later take on terrifying new dimensions when Amin and his mother attempted to cross the border. In one particularly chilling memory, Amin describes how a different mother and child were violently threatened by a trafficker because the boy’s light-up sneakers risked exposing their group.

Eventually, Amin was able to reach safety in Denmark, but his freedom came at a painful cost. Sitting in the dim light of their filming room, Amin explains to Rasmussen (and by extension the audience) that he was only granted asylum because the authorities believed he was an orphan. If they ever learned that his mother and siblings were alive, he’d likely face deportation. Thus, a teenaged Amin grew up alone, forced to hide his trauma behind a fabricated script.

“Most people can’t even begin to imagine how feeling like that affects you,” says Amin, as the two friends share a solemn moment. “What it means for your relationships with other people… how much it destroys you.”

Amin knows he’s lucky. He hasn’t just survived, he’s thrived. But nothing in his new life can wipe away the past or replace everything he lost.

Perhaps the most heartbreaking aspect of Flee is how Amin’s life is still ruled by a necessity for invisibility. The film gives him a place to tell his story, but even so, precautions must be taken. Names and locations are changed to protect the identities of those involved. Flee’s beautiful animation, which allows for piercing moments of pain and joy, is also used to mask Amin’s appearance. The face we come to recognize, with its soulful eyes and world-weary lines, is not the true Amin. Only his voice is genuine.

Flee makes a point to show how these burdens are not uncommon among refugees. The rough sketches employed in the opening scene appear periodically throughout the film to highlight how easily a person can lose their identity within the cogs of a neglectful system, or have their life snuffed out by the whims of human cruelty.

This reality is perfectly captured in one sequence where Amin and his mother are carted off to a detention center after barely surviving a hellish night at sea. Like Amin, every refugee has a name, a voice, and a story to tell, but far too many end up as faceless statistics in policy battles or news reports. Flee asks us to consider how we fail, or simply refuse, to confront the suffering of others.

Though it is not always treated as such, Scripture, too, is a story of refugees. From its earliest chapters, we meet individuals whose lives and dignity are taken from them by circumstances outside their control.

In Genesis, Noah and his family are set adrift by an environmental disaster (Genesis 7). Hagar, the slave of Sarah, was forced from her home and sent into the wilderness with her son Ishmael (Genesis 21). Jacob was driven out by his brother’s rage and had to sleep on stones during his journey (Genesis 28). Even the great King David became a refugee when he fled to Gath and behaved like a madman in order to preserve his life (1 Samuel 21).

These stories are everywhere in Scripture. Through them, God reveals his love for the refugee and asserts his command to protect the foreigner who arrives seeking shelter (Deuteronomy 10:18-19). But God does more than validate their experiences of loss and grief; he chooses to share them.

In the first book of the New Testament, we watch as Jesus himself becomes a refugee (Matthew 2). Like Amin, his childhood is upended when a cruel government drives his family into exile. Like Amin, he spends years in a strange land, one with a history of hostility toward his people. When we look upon the animated face of Amin, we are also witnessing the face of Jesus (Matthew 25:31-40).

Christians who make this realization are awakened to a new and terrifying truth. Our reaction to the refugee must be more than some airy notion of peace and goodwill. We are to pursue them with the same restless, self-sacrificing love that we reserve for Christ himself. Whether through championing legislation that supports resettlement, giving financially, or simply helping individuals like Amin tell their stories, our lives and journeys are forever connected. Christ himself brings us together.

Despite all of its heartbreaking moments, Flee is nevertheless a documentary about hope. It reminds us that life, joy, and identity can be reclaimed from the darkest places. That love and connection are all around us, if we just have the courage to reach out. For believers, called to love God and love our neighbor, Flee gives a human voice to Christ’s promise that whatever is done for the least of these is also done for him. Because when we finally open our eyes and choose to fully see the stranger in our midst, we realize that Jesus fills the empty spaces between their black and white lines, giving the refugee an identity that can never be erased: His own.