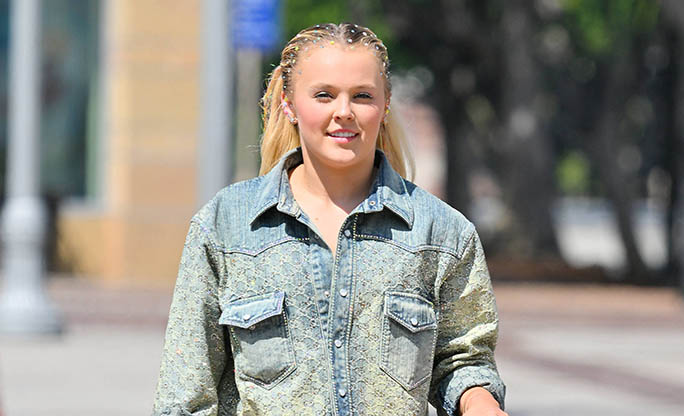 JoJo Siwa served a sporty-chic style moment during her latest outing. The former “Dance Moms” star was spotted on her way to the “America’s Got Talent” studios in Pasadena Calif., on Wednesday. Siwa has continued to support her girl group, XOMG POP who is currently competing on the NBC television show.

The 19-year-old entertainer looked casual and cozy as she made her way to the building with some Starbucks coffee and goodies in hand. Siwa stepped out in a denim acid wash button-down shirt. The garment had a quilted appearance, structured collar and loose-fitting cuffed sleeves. She paired the statement top with blue biker shorts from Alo Yoga.

Siwa stayed true to a comfy vibe and opted for minimal accessories, only adding stud earrings. However, she did add some sparkle to the ensemble and decorated her blond tresses with colorful beads at the front and let the rest cascade on her shoulders.

When it came down to the shoes, the pop singer boosted her height with gold metallic hi-top platform sneakers. The silhouette ran up to ankles, featured a shiny upper and was set on a stacked outsole.

Popularized in the ‘90s, many platform sneakers feature an exaggerated sole on a classic sneaker silhouette. The style is often credited to being popularized by The Spice Girls, returning to fashion in the late 2010s as part of the resurgence of ‘90s trends.

Siwa has a bold fashion sense that was synonymous with bows and glitter for most of her career until late, but this post proved she can bring the sparkle in when necessary. Now, the actress sports clothing that aligns with her laid-back chic style as well as more elevated silhouettes and designs when the time calls for it. For shoes, she gravitates towards colorful sneakers, like the pair she wore earlier in June when she celebrated Pride Month, as well as striking pumps for more formal occasions.