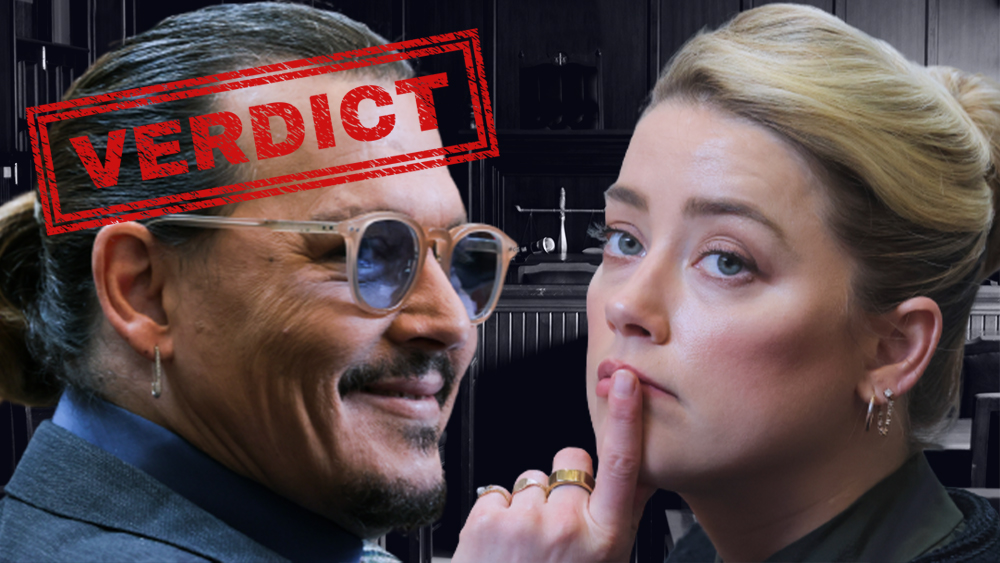 A month after Johnny Depp won his multi-million defamation trial against Amber Heard, the ex-Pirates of the Caribbean star now officially faces the first attempt to smack down his legal victory, with a harsh one-two-punch.

“For all the reasons set forth above, and for the reasons set forth on the record during the hearings and at trial, in the Motions in Limine and Motions to Strike, Ms. Heard respectfully requests this Court to set aside the jury verdict in favor of Mr. Depp and against Ms. Heard in its entirety, dismiss the Complaint, or in the alternative, order a new trial,” says a not unexpected memorandum filed July 1 in Virginia Circuit Court by the Aquaman star’s attorneys.

Heard has long alleged that she suffered violent domestic abuse from Depp. She told a UK court in 2020, and the US trial this year that she had also been repeatedly sexually abused by Depp.

Almost from the moment the over $10 million verdict came down on June 1 overwhelmingly for an absent Depp in Judge Penney Azcarate’s Fairfax, VA courtroom, Heard’s Eliane Bredehoft-led defense and $100 million countersuit team made it crystal clear that they were going to appeal. A requirement by a curt Judge Azcarate at a June 24 final judgement hearing that Heard has to put up a $8.35 million bond to kick off any appeal only merely seems to close off one point of entry for now as another opened up.

However, what is a surprising, is the jury directed uppercut Heard unleashed. Unlike the almost boilerplate request for the verdict to be deep-sixed on precedent and process grounds, claims of sloppy jury vetting could be explosive.

“Ms. Heard further requests this Court to investigate potential improper juror service and take appropriate action warranted by the results of the investigation,” the 43-page memo declares. In a case full of pretzel twists ever since Depp first sued his ex-wife and Rum Diary co-star for $50 million in early 2019 over a late 2018 Washington Post op-end with her byline on it, this move against the integrity of the court itself via Juror No. 15 is a new found high risk strategy.

“The information on the jury panel list appears to be inconsistent with the identity and demographics of one of the Jurors,” exclaims the Bredehoft signed memo. “Juror No. 15 was apparently born in 1970, not 1945, as reported to and relied upon by the parties – including Ms. Heard – in selecting a jury panel,” the document goes on to say.

“Given the requirements for verification of each juror, it appears the identity of the juror was not verified,” it adds damningly of the Old Dominion court. “It is unclear if Juror No. 5 was in fact ever summoned for jury duty or qualified to serve on the panel. This warrants an investigation by this Court to determine if the Juror was in fact summoned, and whether the due process rights of the parties were bypassed. Depending upon the results of the investigation, this may justify setting aside the verdict in its entirety and setting this matter for a new trial.”

After an explicit six-week trial, the seven-person jury handed Depp $10 million in compensatory damages and $5 million in punitive damages — the latter of which was cut down to $350,000 due to the ceiling under Virginia law. Echoing statements made by Heard and her attorneys since the trial concluded, the new-ish July 1 memo says that “the verdict is excessive as a matter of law in light of the evidence and law, and should be set aside.”

“Further evidencing the confusion resulting from Mr. Depp’s efforts to relitigate the 2016 domestic relations matter without the truth of the UK judgment, the jury’s dueling verdicts are inconsistent and irreconcilable,” the memo goes on to say, putting emphasis on both the volatile couple’s temporary restraining order punctuated divorce. It also grinds in some salt by spotlighting Depp’s loss on the other side of the Atlantic in late 2020 in his libel suit against Rupert Murdoch’s The Sun tabloid for calling him a “wife beater.”

Though the mainly ACLU-written op-ed in the Jeff Bezos-owned WaPo never actually mentioned Depp by name, the litigious actor claimed it “devastated” his already waning career. In court filings and on the stand, Depp went on to claim that he was in fact the one who was abused in the relationship.

Rarely mention the First Amendment up until closing arguments, Heard’s team are now focusing on the scope and depth necessary to reach a defamation claim, as Depp has done so far. A standard, they say, the past Oscar nominee and his Brown Rudnick LLP crew did not meet:

For the jury to find Ms. Heard demonstrated actual malice, Mr. Depp was required to establish at the time the Op-Ed was published, Ms. Heard did not believe she had been abused or that she had doubts about whether she was abused. But Mr. Depp presented no evidence that Ms. Heard did not believe she was abused. Instead, the evidence overwhelmingly supported Ms. Heard believed she was the victim of abuse at the hands of Mr. Depp. Therefore, Mr. Depp did not meet the legal requirements for actual malice, and the verdict should be set aside.

Reps for Depp and his Ben Chew and Camille Vasquez-led legal team did not return request for comment today on the new Heard motion and the accompanying memo. On the other hand, the Hollywood Vampires guitarist Depp himself, having turned up on stage a few times with Jeff Beck in the UK last month during and after the jury’s deliberations, did take to social media this weekend. Displaying a little less swagger than he had online in the hours and day immediately following the defamation case verdict, Depp too did not have any direct response to the new filing – yet: