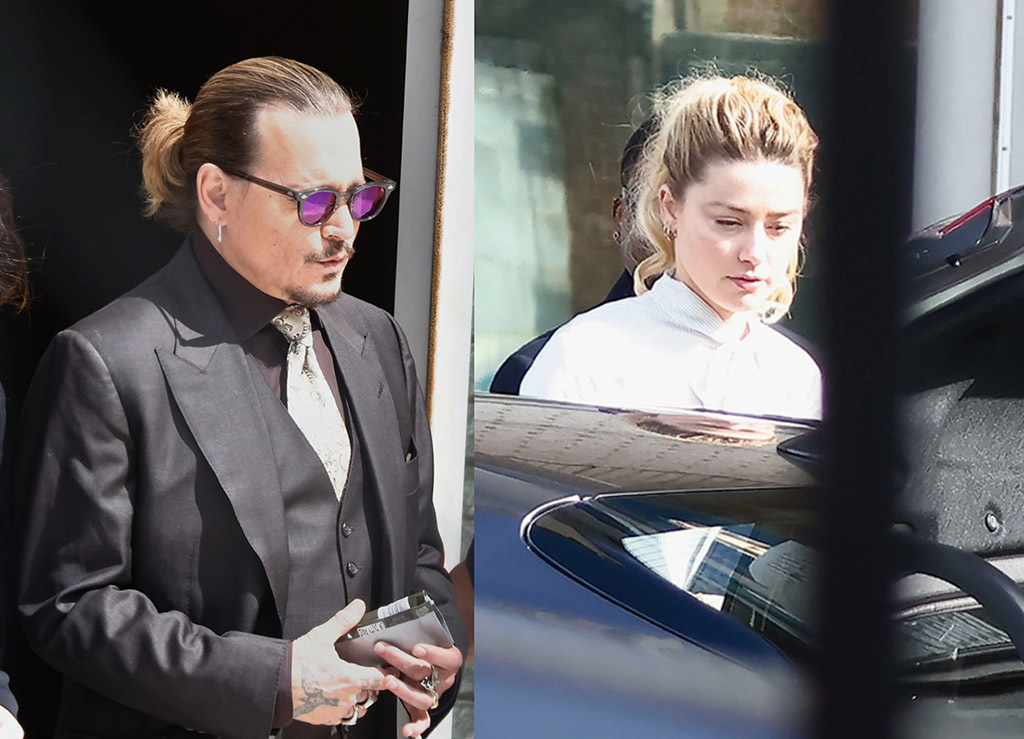 Johnny Depp took the stand in his defamation trial against Amber Heard and denied abusing his ex-wife “or any woman.” Although the actor testified in a similar trial in the U.K. in 2020, which he lost, this is the first time the public has seen him directly address the disturbing allegations as proceedings are livestreamed on Court TV. Depp spoke slowly, appeared somber, and said he has been waiting six years to respond to Heard’s “diabolical” claims.

“About six years ago, Ms. Heard made some quite heinous and disturbing — brought these disturbing criminal acts — against me that were not based in any species of truth. It was a complete shock that it would — it just didn’t need to go in that direction. Nothing of the kind had ever happened … There were arguments and things of that nature, but never did I, myself, reach the point of striking Ms. Heard in any way nor have I ever struck any woman in my life,” Depp began when asked why he’s in court today.

Depp is suing Heard for $50 million for describing herself as a “public figure representing domestic abuse” in a 2018 op-ed for the Washington Post. The Aquaman star is countersuing him for $100 million. The actress filed for divorce in May 2016 and obtained a domestic violence restraining order against the actor.

“[Abuse allegations] then made its way through media, social media, became quite a global let’s say ‘fact,’ if you will, and since I knew that there was no truth to it whatsoever, I felt it my responsibility to stand up, not only for myself in that instance, but stand up for my children,” he declared.

Depp said his two children, Lily-Rose and Jack, were ages 16 and 14 at the time respectively when Heard brought allegations against their father.

“I thought it was diabolical that my children would have to go to school and have their friends or people in the school approach them with the infamous People magazine cover with Ms. Heard with a dark bruise on her face, and then it just kept multiplying,” Depp continued. “It just kept getting bigger and bigger so it was my responsibility, I felt, not only to attempt to clear my name for the sake of many reasons, but I wanted to clear my children of this horrid thing that they were having to read about their father which was untrue.”

Depp added, “My goal is the truth.”

“I had to wait for my opportunity to address the charges, which were criminal charges, and they just weren’t true. So I felt the responsibility of clearing the record the only way that I could get to the point where I could speak,” he explained, calling the last six years “trying times.”

Depp said he went from “Cinderella” to “Quasimodo” overnight.

“I didn’t deserve that, nor did my children,” he continued. “I didn’t want any of those people to believe that I had done them wrong, or lied to them, or that I was a fraud. I pride myself on honesty, I pride myself on truth — truth is the only thing I’m interested in,” he added. “Today is my first opportunity to speak about this case in full for the first time.”

After his opening statement, Depp started talking about childhood abuse he and his siblings suffered at the hands of their mother. His sister, Christi Dembrowski, previously testified about the physical and emotional abuse they suffered, and how Depp vowed never to repeat the violence.

“She had the ability to be as cruel as anybody could be,” Depp said of his mother, who passed away in 2016. They reconciled before her death. The actor said his mother would fling an ashtray at him, “beat” him “with a high heel shoe, a telephone, whatever’s handy.”

Depp wondered how his father was able to take the abuse, wondering, “Why doesn’t he leave her? But he didn’t.”

Depp is the third witness called on Tuesday and is still currently testifying. Yahoo Entertainment will continue to update this post.

Earlier, the defense called Keenan Wyatt, a sound technician who worked with Depp from the ’90s to 2016. They also became close friends.

“I’ve never seen him be violent towards anybody,” Wyatt told the court. He went on family trips with the actor and his former partner, Vanessa Paradis, with whom he shares his two children. In his observation, Depp was nothing but “a very loving father.”

Wyatt also spent time with Depp and Heard during their tumultuous relationship, and testified that he never heard Depp yell at or abuse the actress — including on that infamous May 2014 flight from Boston to Los Angeles.

Heard maintains that one of the 14 instances of abuse sustained during her relationship with Depp occurred on a private plane. She alleges that Depp flew into a drunken rage on the flight over suspicions she was sleeping with James Franco. The actress claims she was kicked and slapped by Depp, who yelled obscenities about how she was “getting f***** on set” by Franco filming The Adderall Diaries.

Wyatt testified Heard “was giving Johnny the cold shoulder, being quiet and seemed pouty.” He stated that at one point on the flight, the actress actually yelled at him.

“All of a sudden she snapped and started yelling at me,” Wyatt said, “so I went back to my seat and minded my own business… she was abruptly loud.”

Wyatt said he saw Depp and Heard “very clearly” and that he witnessed no physical altercation. He admitted Depp consumed alcohol on the plane, but that the actor wasn’t overly intoxicated as he “seemed like Johnny, seemed normal.” He testified he never saw any marks or bruises on Heard.

“I have never seen Johnny abuse anyone, ever,” he added.

During cross-examination, Wyatt admitted he actually had heard of Depp being violent towards someone in 2017. Crew member Greg Brooks, who was working on Depp’s film City of Lies, sued the actor for assault claiming Depp “angrily and forcefully punched [Brooks] twice in the lower left side of his rib cage.”

Sean Bett, a member of Depp’s security team, also concluded his testimony on Tuesday morning. He told the court he never witnessed anything that made him concerned for Heard’s safety but was concerned for Depp’s well-being as he once took photos of the actor’s injured face after an alleged fight.