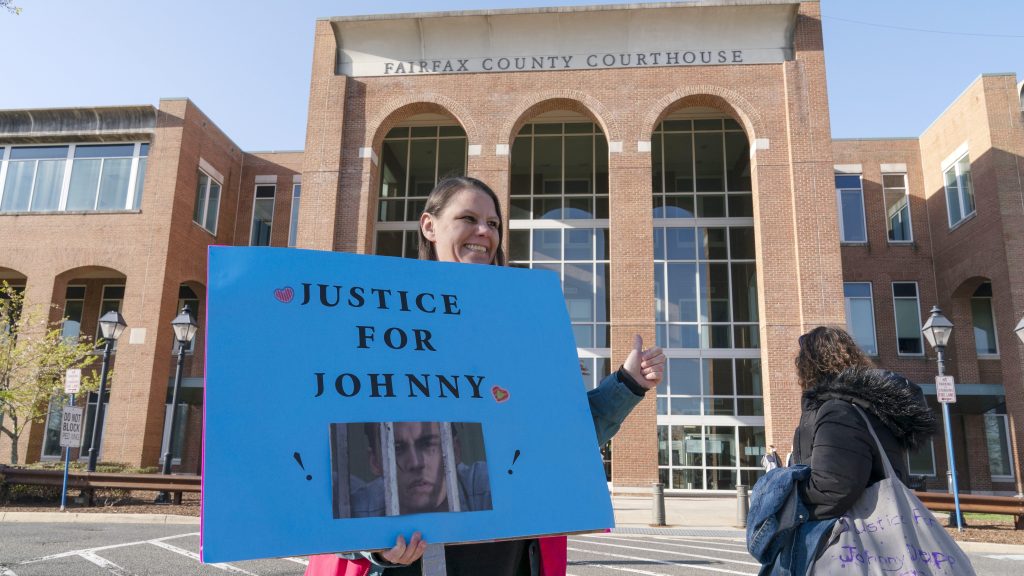 Most of the potential jurors in the Johnny Depp–Amber Heard defamation trial professed to know little about the case. Some were a bit puzzled when they walked into the Fairfax, VA, courthouse to see signs of “Justice for Johnny.” One potential juror admitted that he couldn’t quite place the plaintiff’s ex-wife. “To be honest, I forgot the name of the other party,” he said.

That was apparent by the relative speed with which it took to pick the jury of 11 men and women, as they were seated by mid-afternoon. Opening arguments now begin Tuesday.

During the roughly four hours of questioning, attorneys on each side gave a glimpse of what will come up during the trial, as they pressed potential jurors on whether they held strong opinions or biases over a number of topics including MeToo, domestic abuse and sexual assault, alcohol and drug use, victim shaming, celebrity social media postings, police believability, the use of foul language and angry destruction of property. All of it has been part of the tabloid coverage of the case — and for good measure jurors were asked if they knew what the Daily Mail was.

The judge in the case, Penney Azcarate, told jurors that the trial would be about six weeks, suggesting a complex case that may come down to the believability of certain witnesses over others. The jury is not sequestered, but they were advised not to read or research the case, even to turn off their cell phone notifications to prevent them from accidentally seeing a news alert.

Fairfax, VA is 19 miles southwest of Washington, D.C., a suburban enclave well within its sphere of influence but enough removed to make the flood of cameras of a celebrity trial a bit unusual for the city. On Monday, along with a Court TV truck and a lineup of about a dozen cameras were about 25 spectators, some hoping to catch a glimpse of Depp and others planning to stay the duration of the trial in support. Some had strong feelings about Depp and Heard.

Otey, who drove about five hours to get to Fairfax on Sunday, brought some flowers she wanted to give to him. But as it turned out, Depp entered through a side entrance, and she did not see him.

Heard had a few defenders, including one group that handed out cards contending that social media bots have manipulated public opinion against her.

One of the spectators, a financial adviser who works across the street from the courthouse, was just curious about all of the commotion.

“Someone jumped off the parking structure three weeks ago. This is the biggest thing to happen since then,” he said, referring to a man who leapt from a five-story courthouse ramp but survived.

The trial ended up in Fairfax County because Heard wrote her 2018 op-ed, in which she identified herself as a victim of domestic violence but did not name Depp, for the Washington Post, which is printed in nearby Springfield and circulated in the region. Until the state passed an anti-SLAPP law in 2020, Virginia also had been viewed a bit more favorably as a place to file defamation claims.

In contrast to Depp’s fans who showed up as spectators, members of the jury pool professed to be a bit more in the dark about the case.

One potential juror admitted that over the weekend, he was intrigued enough about why the case was being held in Fairfax County that he looked up the Heard op-ed to see what it was all about. “I thought it was a very well written opinion piece,” he said. He wasn’t picked.

A number of those who had heard about the case said that what they knew was sketchy. One woman said that she learned from her 16-year-old daughter that “something was thrown” and that there was abusive language. She, too, was not picked.

Most of the potential jurors were a bit of a blank slate when it came to Hollywood. When asked whether anyone worked in the industry or had family members who did, only one woman offered that her daughter recently got a job at Universal.

There was obvious familiarity with some of Depp’s movies, but not so much of Heard’s films. One juror identified Aquaman.

That said, few of the potential jurors could say that they don’t use social media. “I just believe that I could survive without it,” said one woman. During the trial, everyone in the courtroom will have to, as use of phones and laptops are prohibited.