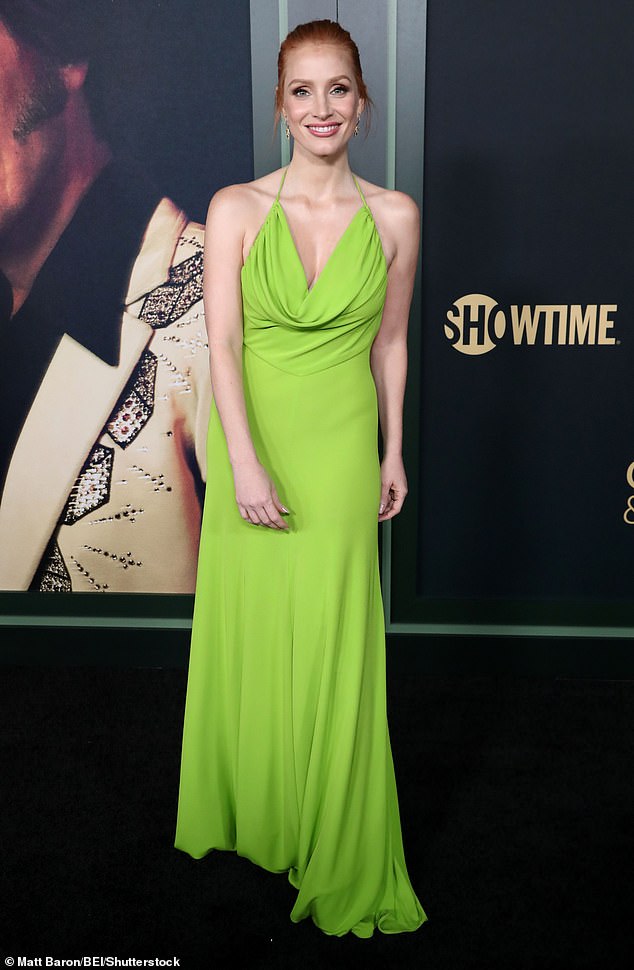 Jessica Chastain made a show-stopping appearance in a vibrant green dress and wowed at the George & Tammy premiere in Los Angeles earlier Monday evening.

The Oscar-winning actress, 45, opted for a pop of color as she stepped onto the glamorous red carpet along with her fellow cast members and other celebrities.

The Showtime limited series, which originally was set to be a film, follows the country music careers and relationship of icons Tammy Wynette, played by Chastain, and George Jones, portrayed by Michael Shannon.

The Eyes Of Tammy Faye actress made a fashion statement by wearing a backless, lime green dress with a draped cowl top.

The gown was held up with a thin halter straps that were tied at the back of her neck, while the soft, flowy material fell down towards the ground.

The stylish ensemble showcased her fit figure as she cheerfully posed for an assortment of photos once she arrived at the grand premiere taking place at Goya Studios.

Jessica pulled back her long locks into a low ponytail, allowing her hair to cascade behind her. 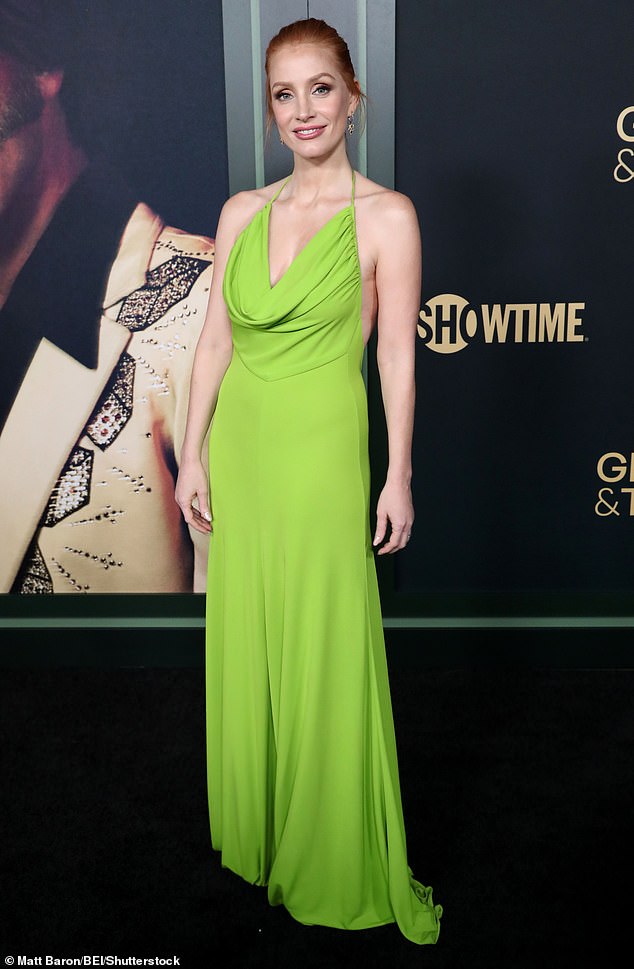 Elegant: The talented actress donned a lime green dress that was secured with thin halter straps behind her at the base of her neck 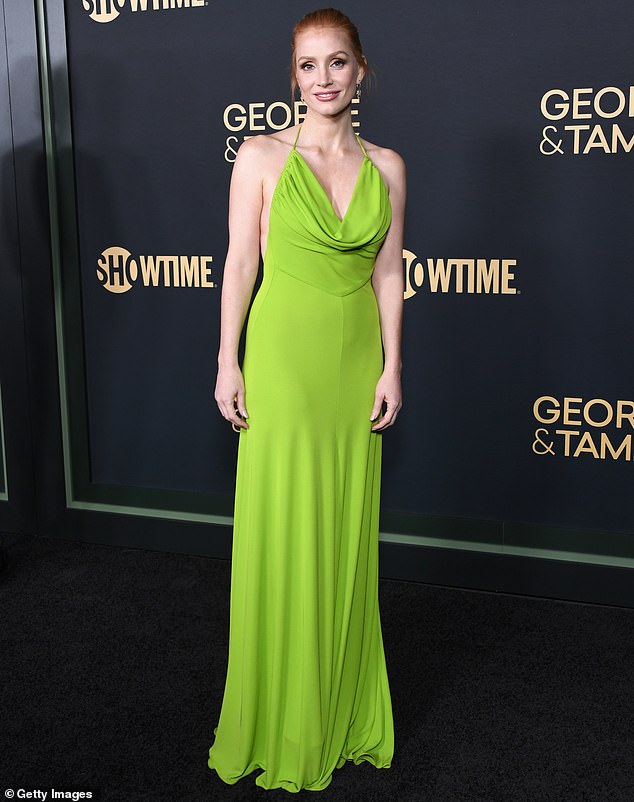 Big role: The beauty took on the role of country music icon, Tammy Wynette, in the upcoming Showtime limited series, which airs on the network on December 4 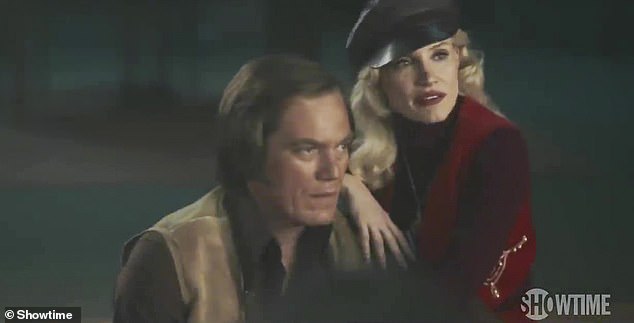 Star-studded cast: Jessica and George were seen in the shoes of their characters of Tammy and George in the six-part, limited Showtime series

The Zero Dark Thirty star kept her accessories minimalistic for the event, and chose to only add a pair of gold, dangly earrings to the ensemble.

Her makeup was classically done, comprising of a gold shimmering eyeshadow , black eyeliner and mascara, along with pink blush and a pink-colored satin lipstick.

Jessica was cast to portray the leading role of influential country star, Tammy Wynette, in the George & Tammy miniseries. The singer is known for hits such as Stand By Your Man.

The actress, who initially joined the project over ten years ago in 2011, opened up to Vanity Fair about stepping into the shoes of Tammy, also known as The First Lady of Country Music. 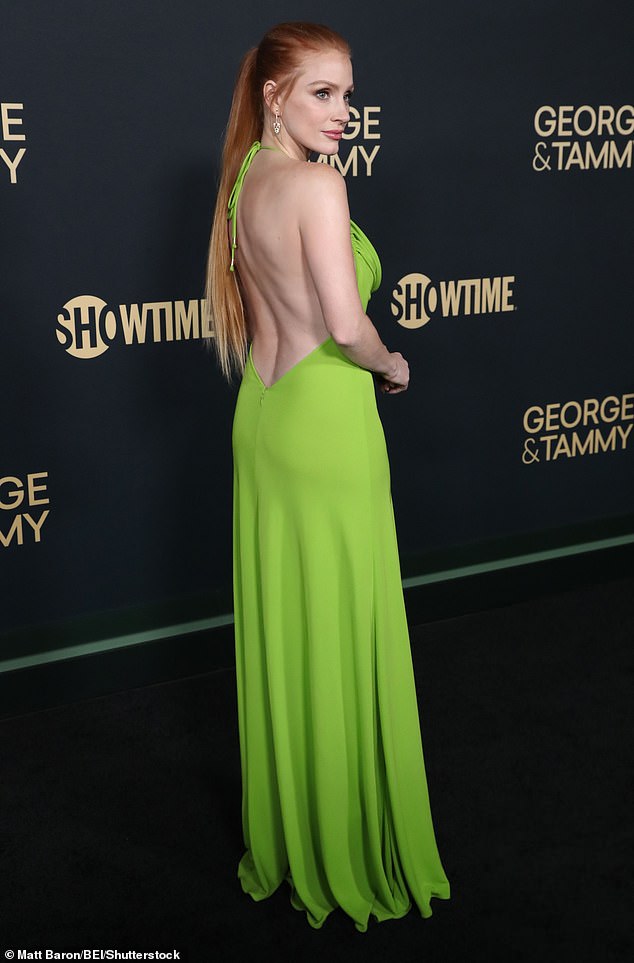 One-of-a-kind ensemble: As Jessica posed for a quick photo session, she showcased her stunning dress to the cameras 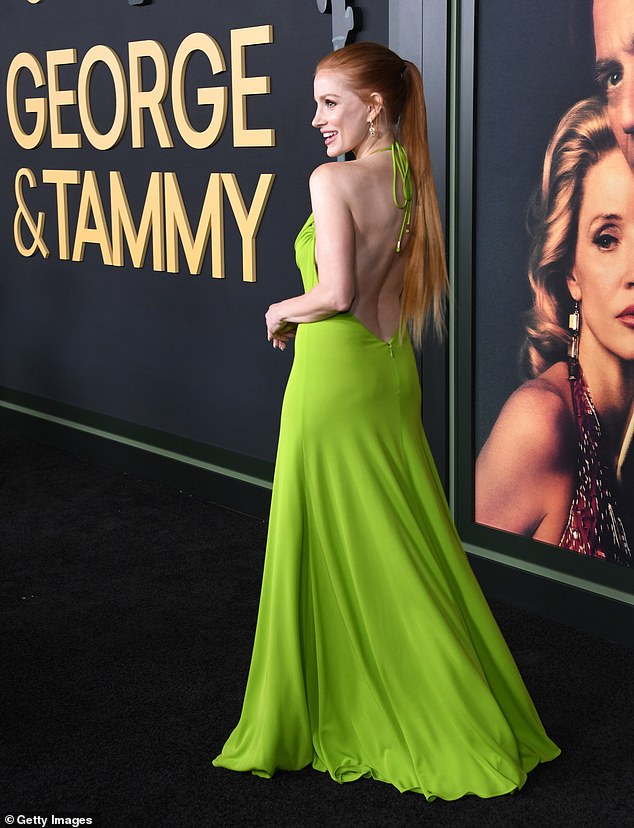 Beautiful: Jessica held a big smile on her face as she turned towards the cameras, with her gown slightly flowing behind her 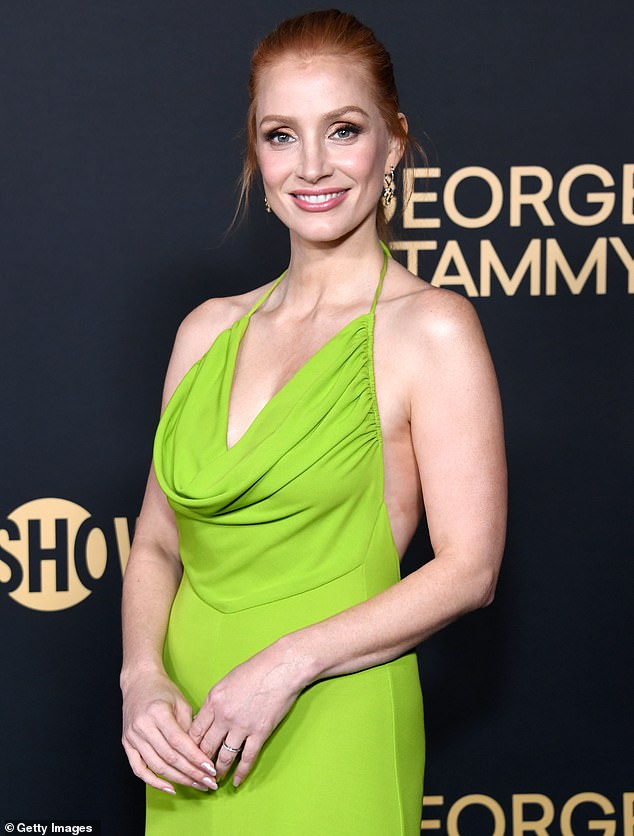 Glammed up: The star’s makeup was classically done, comprising of a gold shimmering eyeshadow , black eyeliner and mascara, along with pink blush and a pink-colored satin lipstick

‘I was really moved by the love story between them, I started to listen to the music and understood that they were always singing to each other,’ she stated, adding to the publication, ‘They were both a huge part of each other’s lives.’

During the interview, Michael talked up vocal training with Ron Browning, who is based in Nashville. ‘These songs, they’re pretty deep and they’ve got some dark corners in them, and we spent a lot of time with them.’

He continued, ‘In addition to learning how to sing them, I think they also kind of taught us about who the people were and the story we were telling.’

Michael also dressed to impress at the premiere on Monday evening. He was seen wearing a classic black suit along with a dark navy dress shirt and matching tie.

Once Jessica crossed paths with the actor on the red carpet, the two stars stopped for a few snaps together. 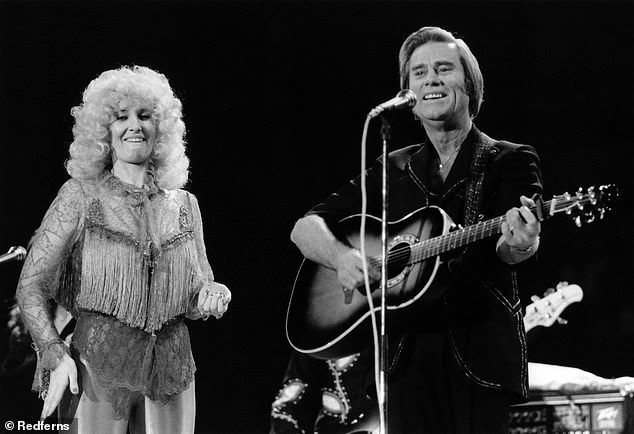 Talented: ‘I was really moved by the love story between them, I started to listen to the music and understood that they were always singing to each other,’ Jessica told Vanity Fair about real-life stars, Tammy Wynette and George Jones

Becoming a country music icon: In an interview with Vanity Fair, the actress expressed that she was ‘really moved by the love story’ between Tammy and George Jones 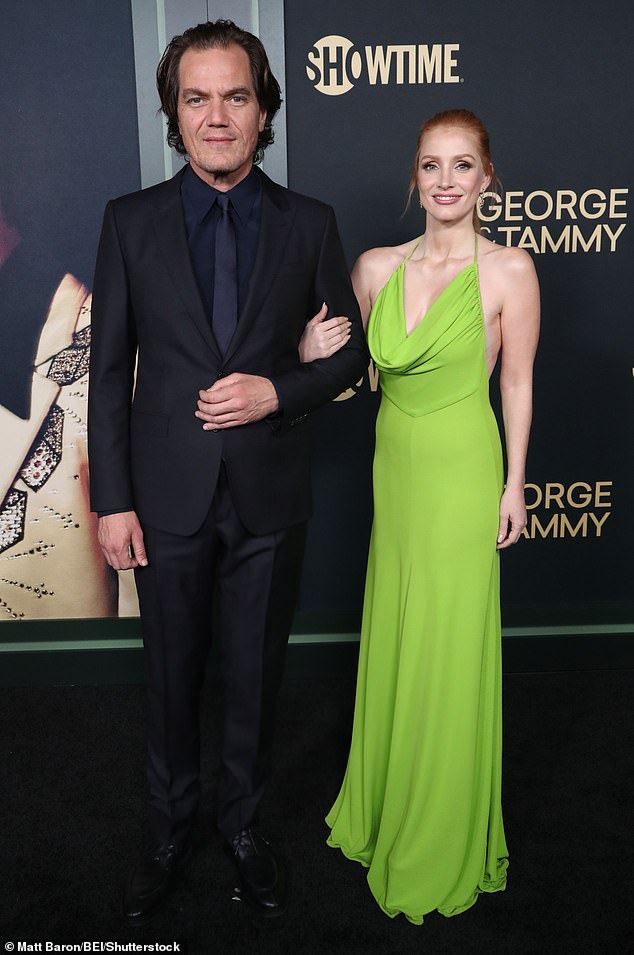 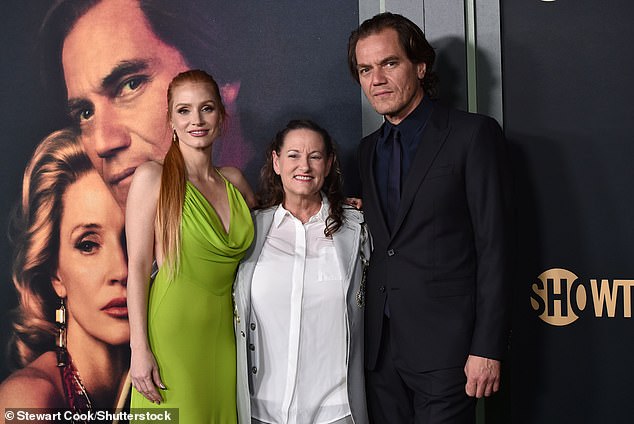 Special moment: Jessica and Michael had the opportunity to pose for photos with George Jones’s daughter, Georgette Jones, at the eventful premiere

Kelly embraced the country theme and opted for a monochromatic ensemble with a black cowboy hat placed on top of her blonde locks.

The actress, who plays the character of Sheila Richey, opted to wear a pair of black, loose-fitting trousers along with a white blouse underneath with a collar that covered her neck.

She added a black vest made of velvet material along with a long-sleeved coat on top to complete her red carpet ensemble.

Vivie Myrick, who was cast to portray Donna Chapel in the show, gave a leggy display in a black, sequin minidress with a plunging, low V-neck cut.

Making a statement: Kelly McCormack opted for a black trousers, a vest, and a high-neck blouse along with a cowboy hat for her overall look for the night 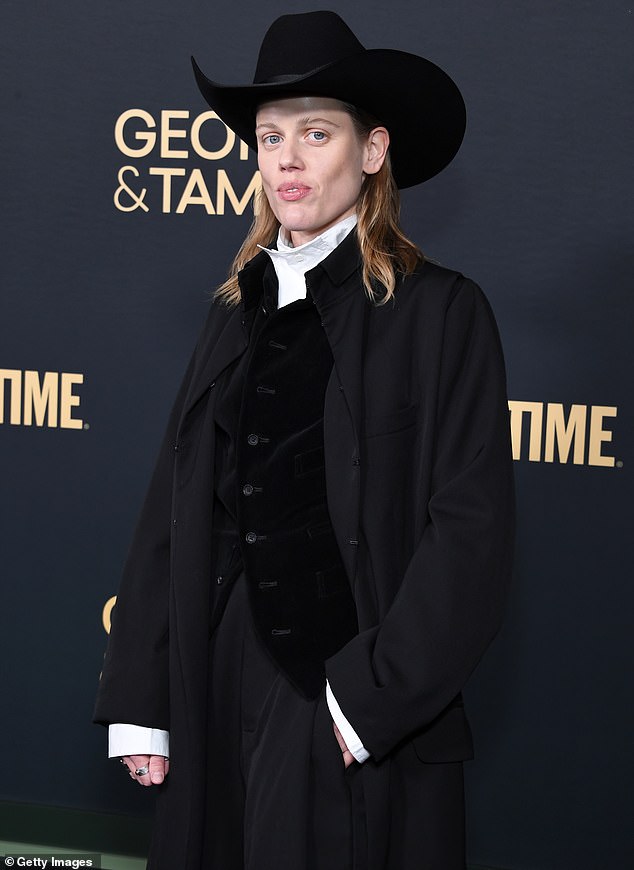 Posing: The Canadian actress was cast to play the character of Sheila Richey in the six-episode miniseries 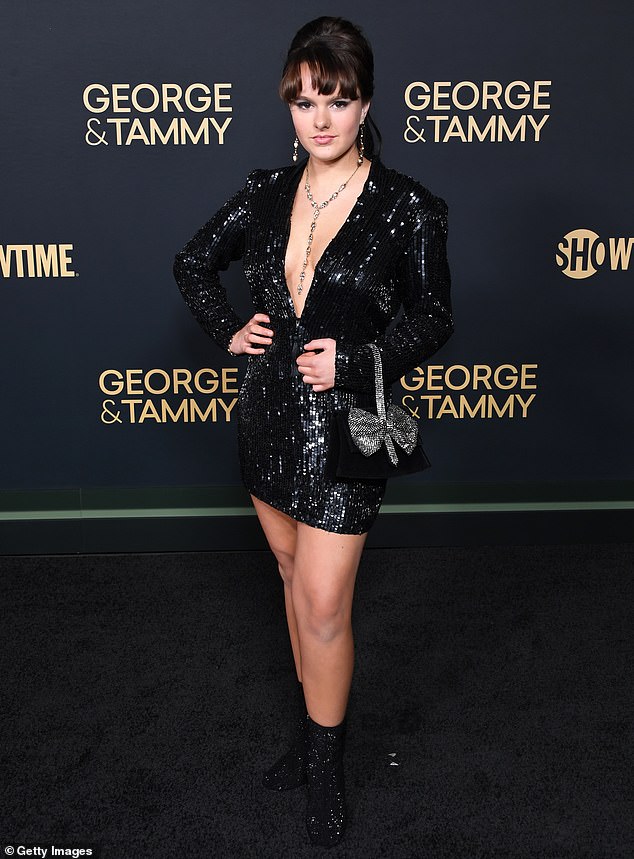 Dazzling: Vivie Myrick, who plays the role of Donna Chapel, opted for a sparkling black minidress to attend the premiere

To coincide with her sparkling look, the actress slipped into a pair of glittering black ankle boots and accessorized the dress with a long silver necklace along with shiny, matching earrings.

Deadly Illusions actress, Greer Grammar, flaunted her toned midriff in a black bralette and miniskirt. She threw on a black blazer along with white, knee-high boots for a bit of contrast to her all-black ensemble.

She was seen also pictured with, Zak Steiner, who is known for his character of Aaron on the HBO Max series, Euphoria.

The Office alum, Kate Flannery, also was in attendance to show her support for the stars and the upcoming series.

Similar to other celebrities at the premiere, she chose to wear a monochromatic look consisting of a chic black dress with a lace overlay and sleek black loafers. 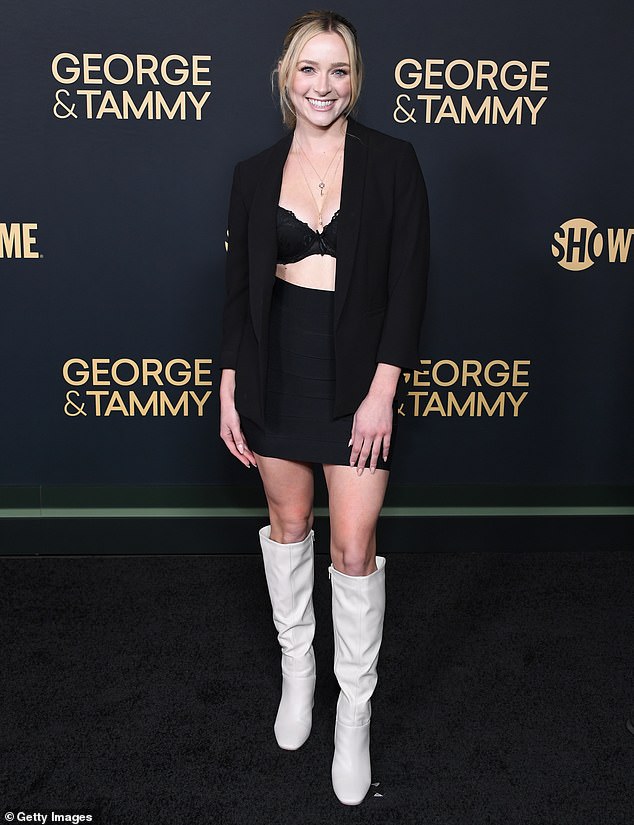 Cheerful smile: Actress Greer Grammar flashed a big smile as she posed for snaps wearing a black bralette and a miniskirt for her red carpet look 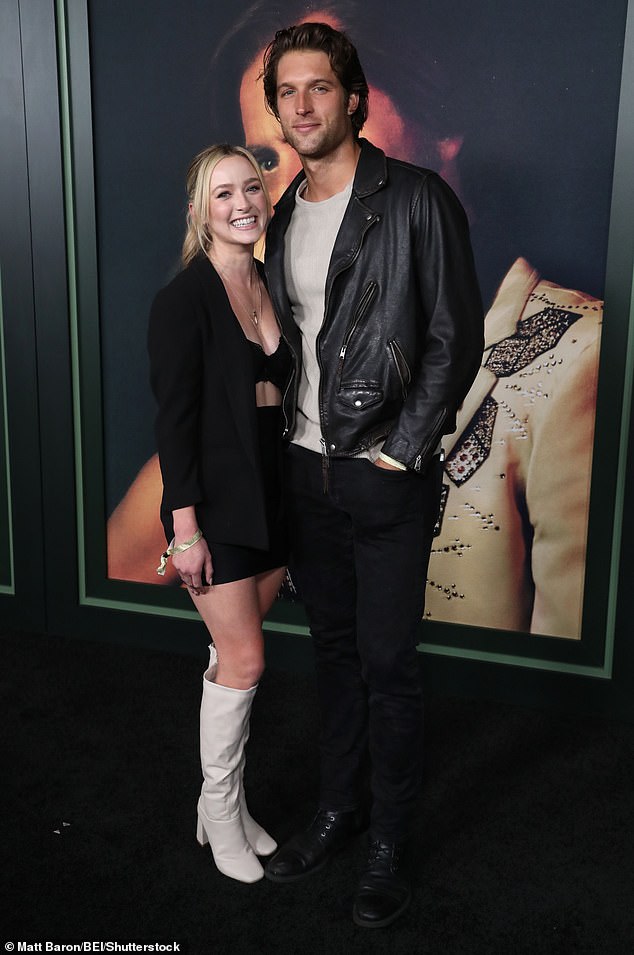 Crossing paths: The actress and Euphoria actor, Zak Steiner, took a moment for a quick photo together at the premiere 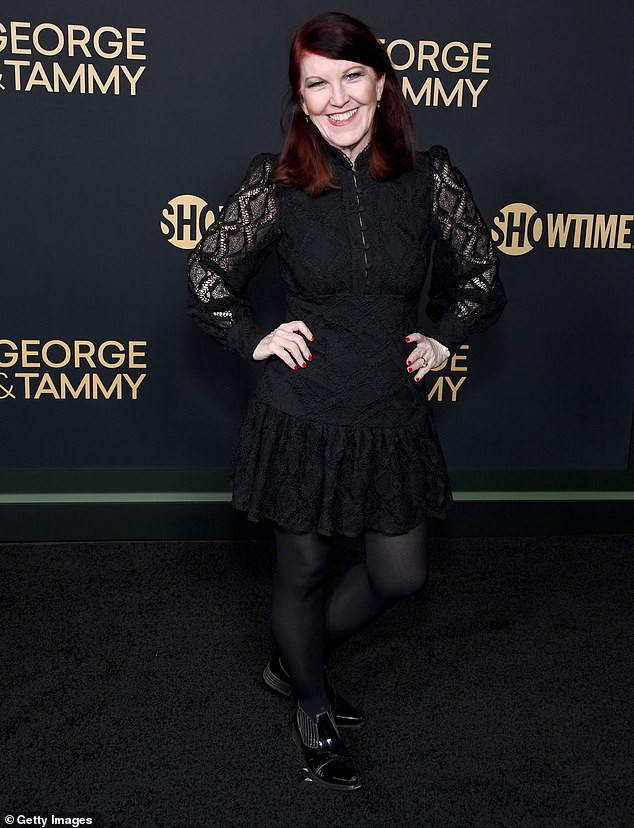 Arden Myrin, known for her role on Netflix’s Insatiable, was radiant in a figure-hugging, sleeveless white knit dress which she paired with silver, open-toed heels.

Abe Sylvia, the creator of the show, was also in attendance to celebrate his series coming to life onto the screen.

Before entering to watch the screening, the stars paused for a memorable group photo together.

Chris McCarthy, the current President/CEO, Showtime and Paramount Media Networks, expressed his excitement about having such a talented cast on board with the series, reported Deadline.

‘Jessica and Michael are truly extraordinary as Tammy and George and their searing performances and undeniable chemistry bring to life the legendary relationship of the King and Queen of country music,’ he stated.

The six-episode limited series will officially be available to watch on Showtime next month on December 4. 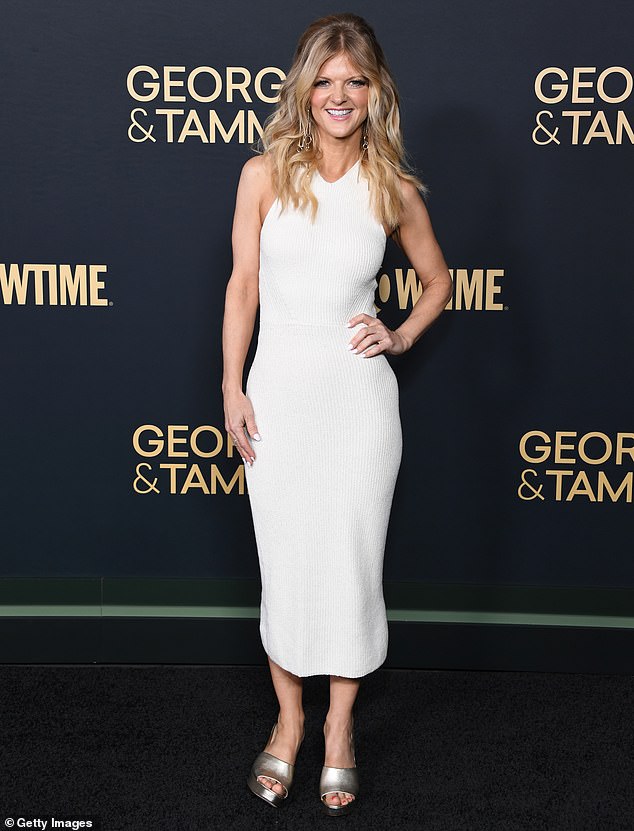 Radiant: Arden Myrin, known for her role on Netflix’s Insatiable, was radiant in a figure-hugging, sleeveless white knit dress 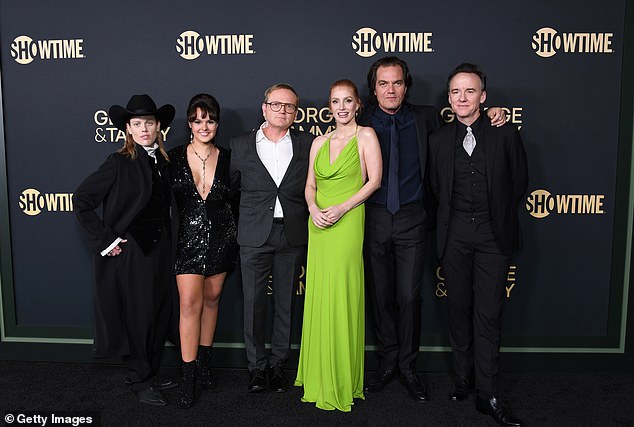 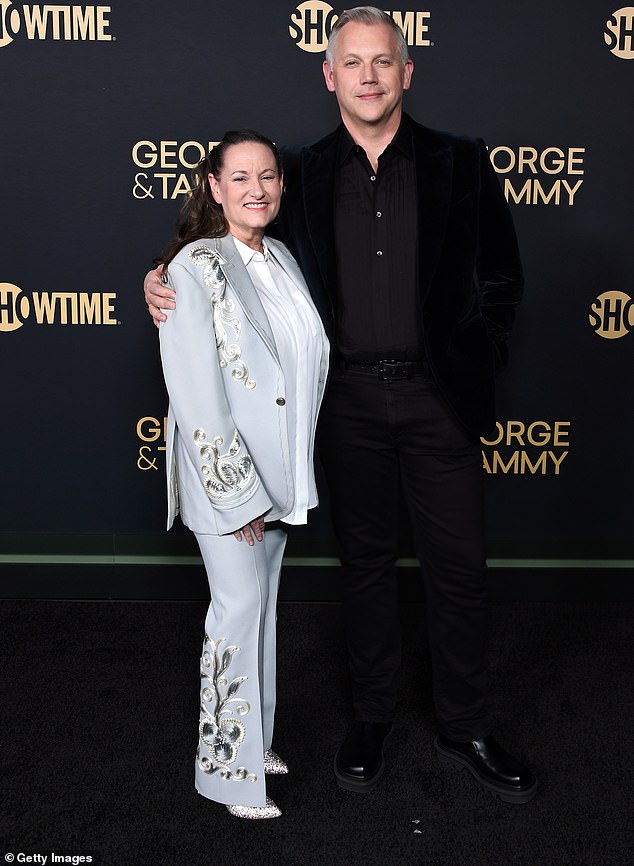 The mind behind the series: Creator Abe Sylvia (right) happily posed with Georgette Jones at the premiere

Based on country icons: The Showtime series is based on real-life country icons and couple, Tammy Wynette and George Jones