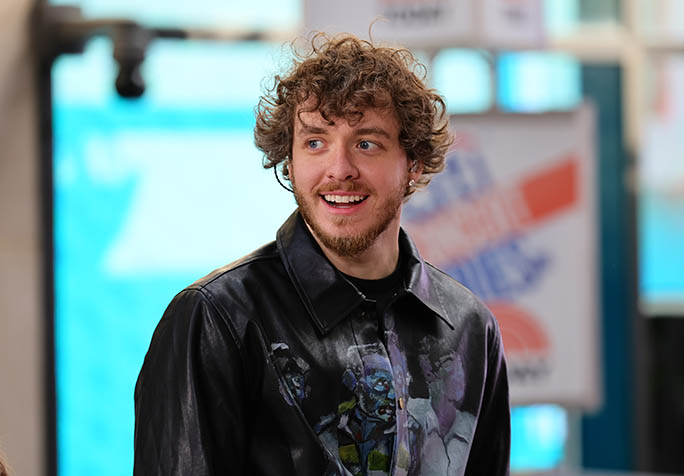 Harlow stayed true to his signature street style aesthetic while appearing at Rockefeller Center in New York City. The entertainer wore a black leather jacket. The outerwear was far from ordinary as it was decorated with a graphic print of dogs at the center. The piece also had a wide structured collar and gold button details throughout.

Harlow teamed the statement top with black cargo pants. The slouchy silhouette had a baggy fit and was adorned with oversized pockets on each side. To let his look do all of the talking, the FN cover star opted for minimal accessories and only added a watch and stud earrings.

When it came down to the shoes, Harlow completed his look with white sneakers. The sleek shoe style had a chunky outsole with black accents. White sneakers remain as the ideal go-to casual sneaker. The right pair of white kicks can offer endless versatility. The eternally stylish silhouette is timeless and manages to be simultaneously on-trend every season.

When it comes to fashion, the musician is known for having an incomparable sneaker collection. He has never been shy about his love for New Balance and timeless streetwear pieces. In February he was revealed as New Balance’s latest ambassador along with Los Angeles Clippers forward Kawhi Leonard in the brand’s “We Got Now” campaign.