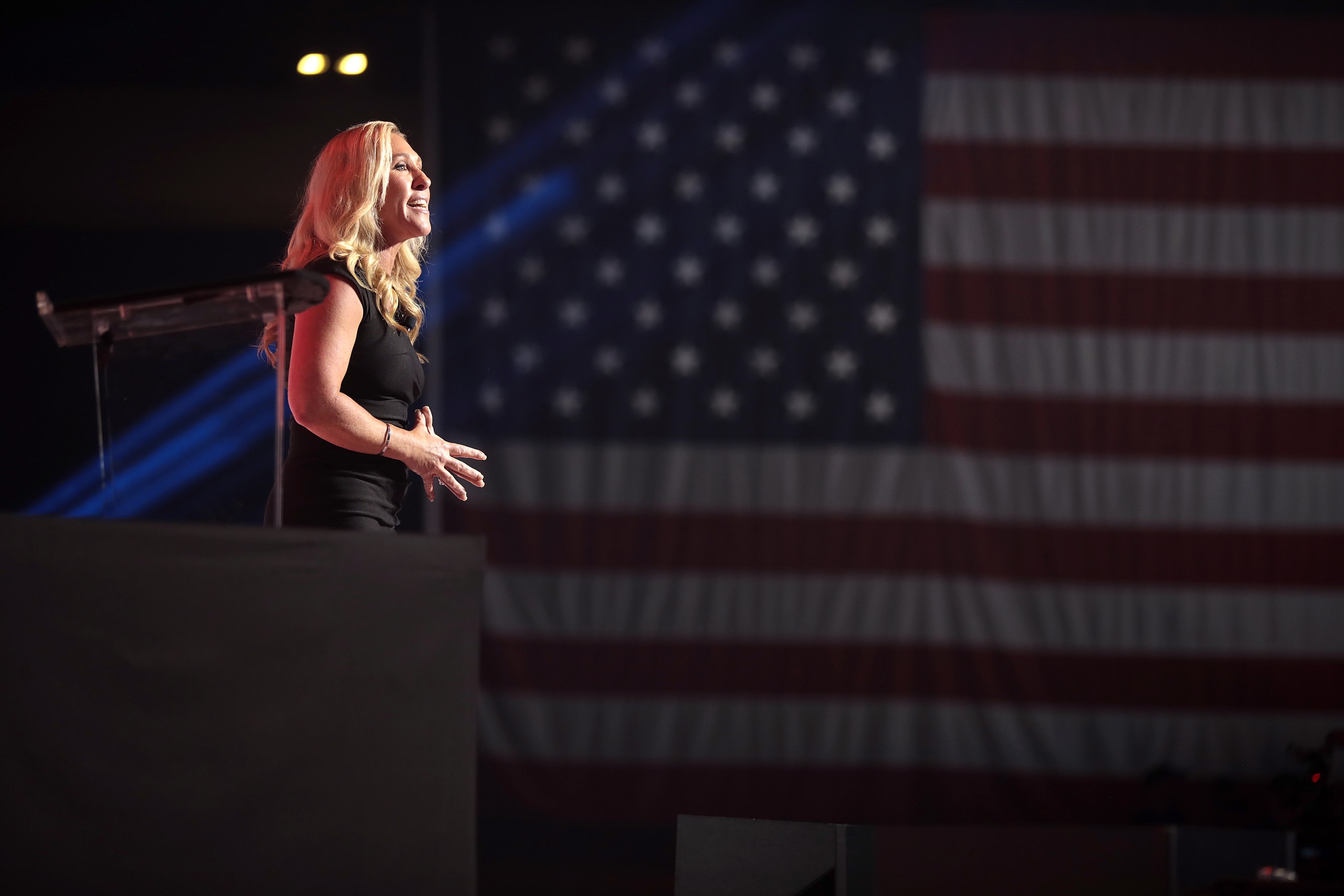 ‘It could have been worse.’

That was the prevailing sentiment among left-liberal voters in the US a day or two after the November 8 mid-term elections, in which Republicans picked up seats in the House and state offices but lost the Senate and failed to launch the ‘red tide’ that pundits had been predicting for months. It wasn’t exactly a sigh of relief – more the lightening of a sense of dread; but in comparison to the fears on the Left of a Republican sweep, it could have been worse indeed.

Actually, the major takeaway of this 2022 election season was its strangeness. The campaigns were fought virtually in the dark. There were hardly any public debates, and even when there was one, Republican candidates substituted a litany of catchphrases (or curses) for reasoned arguments. Tom Kean Jr., the Republican winner of a House seat in New Jersey, peppered his one debate appearance with the phrase: ‘My opponent voted with Pelosi 100% of the time’ – invoking the name of House Speaker Nancy Pelosi, who has become such a pariah in the eyes of Republican voters that a deranged citizen broke into her San Francisco home in an attempt to kidnap her, and seriously injured her 83-year-old husband.

Unlike their pater familias Donald Trump, many Republican candidates refused even to talk to the press. Tweets and incendiary campaign ads replaced proposals for future programs. Both parties focused on local or narrow hot-button issues – crime, immigration, gas prices, abortion, inflation – with far-right Republicans adding to the mix a host of conspiracy theories from election denial to the white genocide (or ‘Great Replacement’) theory, in which Zionist power-brokers stock the US and Europe with dark-skinned immigrants to annihilate the white race.

The fact that the American public raised no protest against this tamping down of public debate left room for a phalanx of new or relatively new far-right Republicans to take the media spotlight. Some, like Florida Governor Ron DeSantis, are already familiar to America-watchers; others, like the gun-toting Representative Lauren Boebert of Colorado, perhaps less so.

The far-right Republicans comprise a fairly homogeneous group: young (under 50), telegenic, often from top universities. A number were also near Olympic-level college athletes in sports as diverse as baseball and water polo. Some are already in Congress and members of the influential Freedom Caucus; others, even though they ran for high office, are completely new to politics (a TV doctor, best-selling memoirist, restaurant owner, investor, etc.). Most curious of all, several have had brushes with the law for a variety of offences from drunken driving and misuse of campaign funds to sex-trafficking across state lines.

Like the ex-president, they seem more pragmatic than principled (some switched political horses in mid-stream) and to have only one stated goal: to tear down all the programs that Democrats have put in place, from Obamacare to the Biden Inflation Reduction Act.

The emergence of this group isn’t completely surprising. In a sense, they are the natural outcome of the American brand of aggressive capitalism: pure careerists eager to gain power to pursue their personal ambitions.

Lauren Boebert (35, Representative from Colorado) espouses all the most radical of Trumpian positions, plus some of her own: election denial, COVID scepticism, anti-immigration and anti-abortion, embrace of QAnon and other conspiracy theories. But her particular claim to fame is gun-rights advocacy, which she takes to the limit, and then some. When she became a House Representative at the beginning of 2021, she joined several other Republicans in petitioning Congress to allow representatives to have guns in their offices and bragged that she herself would be toting a gun while working on Capitol Hill; she refused to be searched at least twice when she set off metal detectors in the Capitol Building. Her brushes with the law include fines for food poisoning at her restaurants, misuse of campaign funds and disorderly conduct. As a born-again Christian, she takes the position that ‘I am tired of this separation of church and state junk.’ Her re-election is still in doubt.

Matt Gaetz (40, Representative from Florida), whose father was a Florida state senator, started his career as a state representative in 2010. From the beginning of Trump’s entry onto the national political scene, he has been an enthusiastic supporter of the ex-president, proposing in 2018 that Trump be awarded the Nobel Peace Prize for his work in the Arab-Israeli conflict. Among his numerous Trumpian positions has been his assertion that the January 6 assault on the Capitol was the work of antifa; he also opposes abortion, immigration, environmental protections, and adoption of children by same-sex couples.

Even by the standards of the Trumpists, Gaetz has had a sketchy relationship with the law. In addition to being arrested for drunken driving in 2008, he was suspended from practicing law in 2021 due to unpaid funds to the Florida Bar Association. In a case extending back several years, he was implicated in a sex-trafficking scheme with a 17-year-old crossing state lines, and was said to have asked for – and been denied – a blanket pardon from then President Trump. At last report, the Department of Justice hasn’t decided whether to prosecute Gaetz for rape and sex-trafficking. This didn’t stop him being re-elected in 2022.

And then there is the flamboyantly unique Marjorie Taylor Greene (48, Representative from Georgia), whose views are so extreme that even many Republican colleagues can’t swallow them. Last year ‘MTG’ was removed from all committee roles in the House of Representatives with the help of Republican votes, on account of her endorsement of political violence. A self-identifying Christian nationalist, she is a proponent of the most noxious conspiracy theories, earning her a Twitter ban in January. Inevitably, she is a cheerleader for Putin’s war in Ukraine. Nevertheless she, too, won re-election. 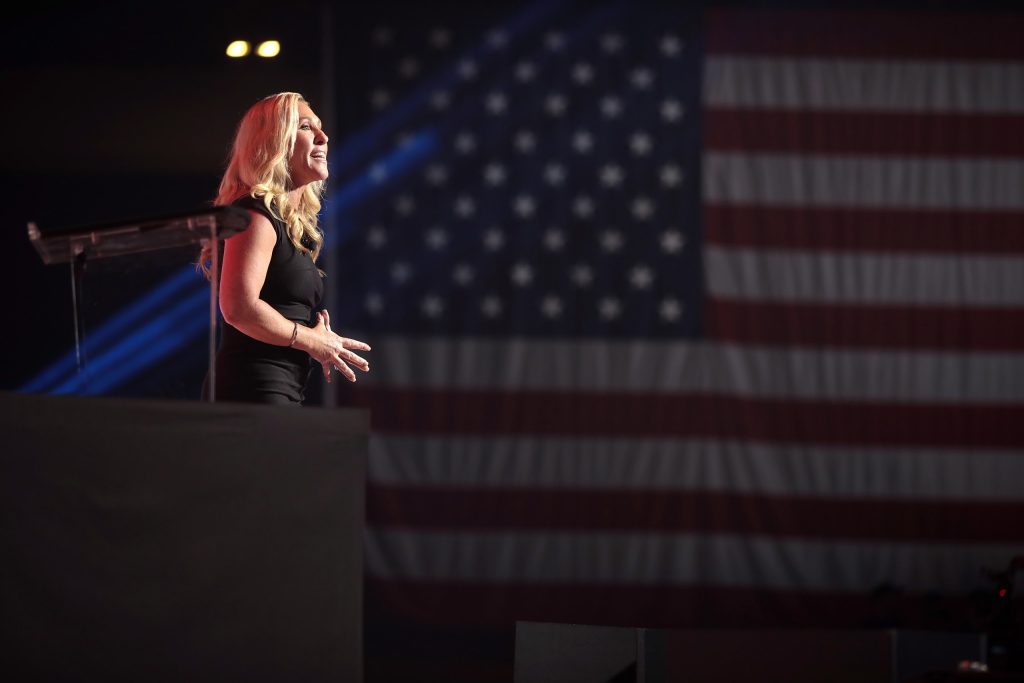 How does one mount a political campaign against opponents like these? The Democrats weren’t quite sure. They seemed locked into an outmoded form of campaigning where candidates confront each other to actually discuss policy. Ultimately, they played their opponents’ game and focused on issues of immediate concern to voters – they maintained, for instance, that Republicans would be worse for inflation than Democrats – while trying to sing the praises of the achievements of the Biden White House, among them the first infrastructure bill in decades. But they seemed dispirited, off-balance, disorganized. Only in the last weeks of the campaign did the Party call on Obama to campaign. Bernie Sanders showed his face only briefly, the Clintons not at all.

So, if it could have been worse, why wasn’t it? Why did the red tide never surge? The heroes of the 2022 election turned out to be the electorate itself, and the stubbornness of their party loyalties. In some states, gerrymandering tipped the scales one way or the other, but in the main, people voted along party lines despite the attack ads and what was going on in social media. For decades the US has been evenly divided between the two parties, and that divide held true regardless of the heated-up rhetoric and free-floating anxiety.

A couple of factors helped the Democrats more than was expected. The highest percentage of under-30 voters in 35 years – 27%, and a significantly higher percentage in contested states like Pennsylvania – came out this year. Perhaps more significant was women’s anger over the Supreme Court’s overturning of Roe vs. Wade. Various state ballot initiatives to protect rights to abortion passed wherever they were proposed, and it’s likely that this momentum spilled over into the general election. There were also signs that Republican voters were finally tired of Trump’s arrogance and bad manners. Possibly the most important result of the 2022 election was the landslide re-election of Florida Governor Ron DeSantis, who seems to be emerging as a saner, cleverer, more effective and persuasive version of Trump.

Even with the encouraging results of the 2022 elections – as of this writing, the Democrats have kept control of the Senate – the next two years will be anything but easy. According to the latest New York Times tabulation, 220 Republican election deniers or doubters were elected to a variety of local, state and national offices, and some have already pledged to try to ‘decertify’ the 2020 election results. Who knows what they will do if a Democrat is elected President in 2024? Assuming the Republicans take over the House of Representatives, Congressional enquiries into Trump’s involvement in the January 6 insurrection will halt and House committees will turn to Biden’s personal and family finances, notably Hunter Biden’s employment by a Ukrainian energy company during the Obama administration. If only for revenge, the Republicans may impeach President Biden, making it the fourth Presidential impeachment in 25 years. The last two years of Biden’s tenure will look very much like Obama’s and Trump’s: Presidential vetoes, executive orders, and bitter words between the President and the House leaders.

Problems loom for the Democrats in 2024 as well. Biden’s popularity is at 41.2%, less than three percentage points above Trump’s at the same point. The fact is that many Democrats – and even those in powerful positions – are lukewarm about Biden running again, which surely accounts for his public waffling over the issue. In 2024, he will be 82, five years older than Ronald Reagan at the beginning of his second term.

If not Biden, who? Vice-president Kamala Harris has been virtually invisible since her election; she’s not a strong candidate. In the 2020 primary the Democrats started out with 22 presidential hopefuls, virtually all of whom lacked the fire, however misguided, of the Republican far-right. Next to the lack of charisma of Democrats, someone like Ron DeSantis could start to look better and better, and not only to Republicans. But could middle-of-the-road Democrats really opt for a candidate who as a representative pledged not to vote for any global warming initiative that would raise taxes, publicly admitted that he agreed with Trump about everything, and as governor of Florida loaded Venezuelan refugees onto a chartered plane and left them stranded on the vacation island of Martha’s Vineyard?

Possibly. If DeSantis unseats Trump in the Republican primaries of 2024, he is a savvy enough politician to modulate his stances subtly toward the middle. He may have enough star-power to discard Trump’s eccentricities while retaining much of his isolationist vision.

He himself seems to think so. As an announcer intones in a recent DeSantis campaign ad over pictures of the Governor shaking hands with police and kissing babies: ‘On the eighth day, God looked down on His planned paradise and said, “I need a protector.” So God made a Fighter.’ Guess who He was talking about.