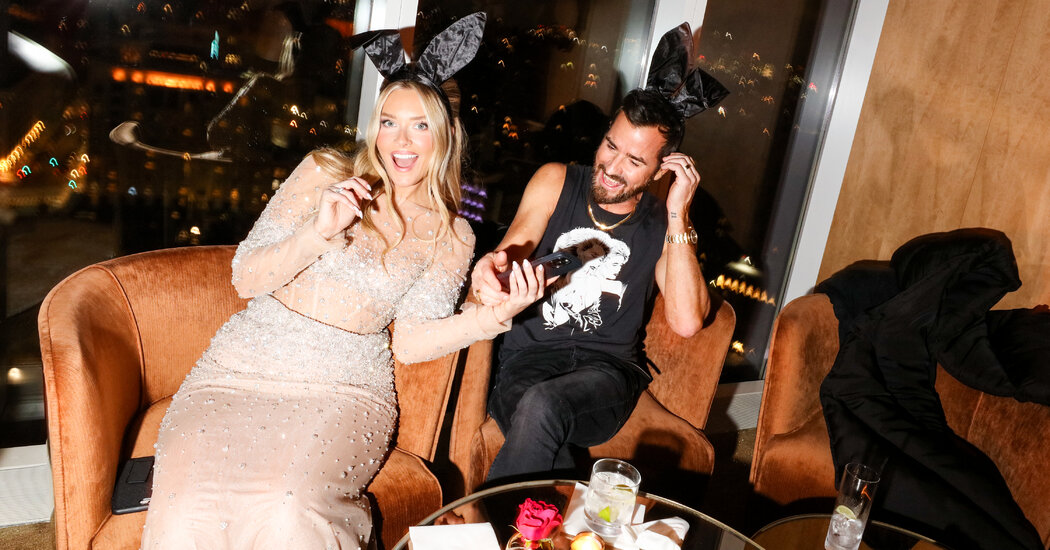 Marc Jacobs was by the bar vaping something cinnamon flavored. Justin Theroux was in the corner wearing a sleeveless T-shirt. A D.J. was playing Black Sheep’s “The Choice Is Yours.”

It was around 1 a.m. at the Boom Boom Room at the Standard hotel, and if the customary after-party for the Met Gala was less starry than it had been in previous years, that was because the main event itself had been, too (there was no Rihanna, Jay-Z, Beyoncé, Jennifer Lopez, Lady Gaga or Madonna).

Also, until a few years ago, few parties competed with the Boom Boom Room. This year, there were rival events hosted by Instagram, LaQuan Smith, Tom Ford, Naomi Campbell, Cara Delevingne and the Blond. So a lot of people grabbed a champagne flute, took a few photos, ate some french fries and bounced to the next thing.

This included Jared Leto, who had gone to the Met Gala with Alessandro Michele, the creative director of Gucci. They styled their hair the same way, wore identical outfits and seemed in all respects to be going for a twin vibe. “He’s one of my dearest friends, so it was a way to celebrate our friendship,” Mr. Leto said around midnight. By that point he was flying solo, as Mr. Michele had gone to bed.

Normani arrived about a half-hour later. “Where are you going next?” she asked a friend. “Naomi Campbell’s,” the friend said. Normani gave a nod to indicate she was planning to do the same.

Shortly before 2 a.m., the party finally got going when a woman climbed atop the bar with a microphone. “Wake up everybody,” she said. “And welcome to the official Met Gala after-party.”

It was Cardi B. So they did as told, grabbing shots from the bar because that was her next instruction (along with an invocation to “turn it up” when the next song came on).

She had gone to the gala with Donatella Versace, who was perched in another booth, and whose birthday had just ended. That got a directive from Cardi B as well.

“Donatella, Ms. Versace,” Cardi B said. “We want to wish you a happy birthday.”

Instagram hosted an after-party rife with influencers at the James B. Duke House, a grand mansion on the Upper East Side of Manhattan.

“If left to my own devices I would stay here and look at the décor,” said Chloe Wise, the artist, as she surveyed the palatial French Classical ground floor, which featured multiple bars with cinematic selfie lighting, and a room lush with plant life.

Mayor Eric Adams arrived around 11 p.m., flanked by a security phalanx. “The Met needed some swag and I brought that swag,” he said, wearing the custom jacket by Laolu Senbanjo with “End Gun Violence” emblazoned on the back. “It had swag and I added to it.” He predicted he would end his night at Zero Bond, the private social club in NoHo.

Mark Rober, a NASA engineer turned glitter-bombing YouTube sensation, marveled at the Met Gala’s blinding star power. He was particularly excited to see Elon Musk. “It was really awesome,” he said. “The net worth of that room is bonkers.”

The event gathered steam late. Hillary Taymour, the creative director of Collina Strada, wore a plaid overshirt from her own collection. She described the after-party circuit as “a playground of fashion’s who’s whos.”

David Lee, a former forward for the New York Knicks, stood half a head taller than anyone in the room. (“It’s hard to wear a top hat when you’re 6-9,” he said of his more conservative tuxedo.) Will Welch, the GQ editor, chatted with Odell Beckham Jr. And everywhere, guests created content of themselves.

Considering the milling herds of Instagram celebrities at the event, how many “likes” were theoretically in the building? Derek Blasberg offered an educated guess. “Infinity likes,” he said.

After midnight, SZA emerged to sing a few songs. A luminescent thicket of cellphones captured the moment.

LaQuan Smith is becoming known for his over-the-top fashion parties, so it was no surprise that he would host his own after the Met Gala — this at time at Peak, a cocktail lounge atop 30 Hudson Yards.

An arsenal of elevators whooshed guests up to the 101st floor. Inside, the “Moonlight” star Ashton Sanders danced to Beyoncé’s cookout-staple cover of “Before I Let Go” and led the electric slide. He still had on his eerie white contacts from the red carpet.

Popeyes catered the affair and previewed a new limited-edition item — the Buffalo Ranch chicken sandwich — which waiters carried out on silver platters.

Mr. Smith, 33, bounced around the lounge all night, wearing a tightfitting black suit and taking pictures with guests.

Over in a corner, Saucy Santana, the Florida rapper, chomped on a sandwich and greeted friends. “Marni on me!” he said, showing off her head-to-toe look. The rapper was torn about how to spend his night — he also had invitations to after-parties hosted by Cardi B, Naomi Campbell and Teyana Taylor. “I’m trying to spread the love to everybody,” he said with a diplomatic smile.

As the night wore on, guests danced and bought LaQuan Smith x Philo sunglasses ($1) from a vending machine that accepted Apple Pay. Goody bags that included pre-rolled joints and a gift card to Popeyes appeared. Guests ventured to the outdoor sky deck and lit up.

Around 1 a.m., Saucy Santana dashed to the elevators. “I’m gonna party with Cardi,” he said.