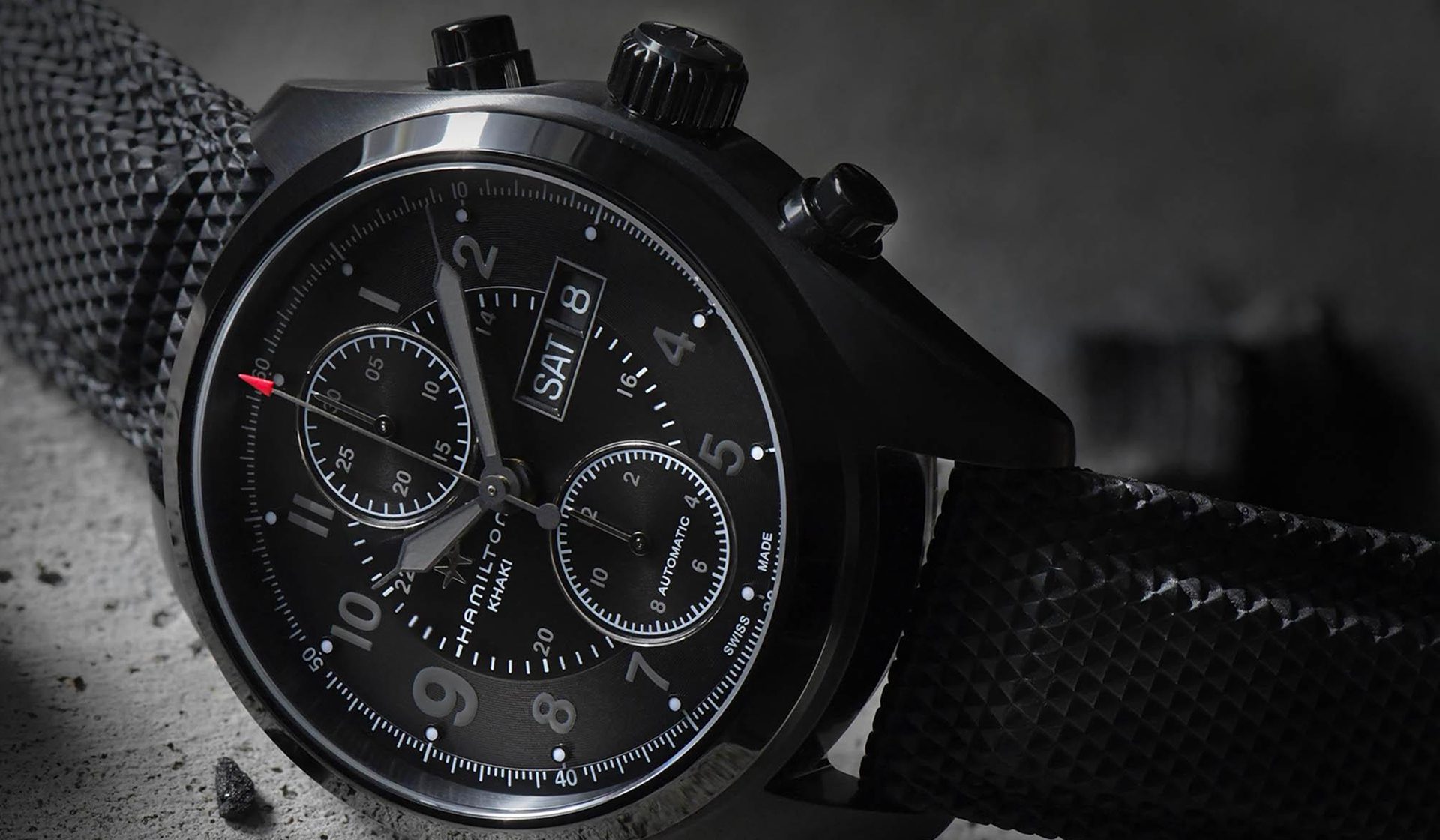 A watch wardrobe can feel like a contradiction in terms. It was only a generation ago that people just bought one watch and wore it until they, or it, stopped working. Now, it’s all about wardrobes and collections.

However, there is method in this seemingly consumerist madness. Firstly, having more than one watch actually improves the life span of the timepieces you own because you’re not inflicting everyday slings and arrows on one timepiece – cases are robust these days, but one watch can only take so much.

Then there’s a question of style. Yes, 007 has proved you don’t have to retire your diving watch for cocktail hour and once-draconian sartorial rules are now more relaxed, but this is about self-expression, experiencing the joy of seeing a perfectly colour coordinated cuff and strap as you go about your day, the frisson that comes from contemplating your next acquisition.

If that appeals, then here is our guide to how to start collecting. One watch at a time.

If this is the first time you have dipped your toe in horological waters, then start with a solid all-rounder; something that won’t embarrass you in the boardroom but won’t look too flash down the pub either.

You’ll be wearing it every day, so it needs to be robust, meaning stainless steel is your best option. Whether you go leather, rubber or full steel on the bracelet is up to you. Choose mechanical. Self-winding or manual is your choice. The good news is you don’t need to spend a fortune to tick all these boxes. Launched in 2021, this quickly became the watch of the year. And it’s easy to see why. It’s a classic integrated steel bracelet design straight out of the 1970s (it’s based on a Tissot from 1978); it’s so versatile you could pop it under a shirt cuff or pair it with shorts; it even has a water-resistance of 100m, which suffices for a splash around the pool.

However, the real draw is the Powermatic 80 under the bonnet. This robust and accurate movement, based on ETA’s famed 2824, has no regulator (it is regulated in the factory by laser) and 80 hours of power reserve. That’s a lot of bang for comparatively few bucks.

Note: for the rest of this list, we will offer price options. However, this is such an amazing purchase there’s nothing else to recommend.

You’ve bought your first everyday wearer and now you’re eyeing up your next purchase. It should be a diving watch.

It could be argued that, unless you regularly don rubber, a diving watch isn’t necessary. However, that they are built for diving makes them excellent companions for land lubbers. As well as having unidirectional bezel’s as standard, the numerals and hands are coated in SuperLuminova – great at depth, even better when trying to work out what time your child, neighbour, or drunken other half has woken you up.

That’s not all. It needs to have resistance to shock, magnetism and chemicals. The strap is rubber – useful in water, easy to clean at home. The need to perform under water pressure means the case construction is incredibly secure.

The other great thing about diving watches is the variety of styles, and price points, in which they come. There’s the super-sporty, chunky icon that is the Seiko 5 (a steal at £280) or the vintage stylings of the Longines Legend Diver, with its elegant internal rotating bezel. Whatever your tastes, there’s a diver to suit. 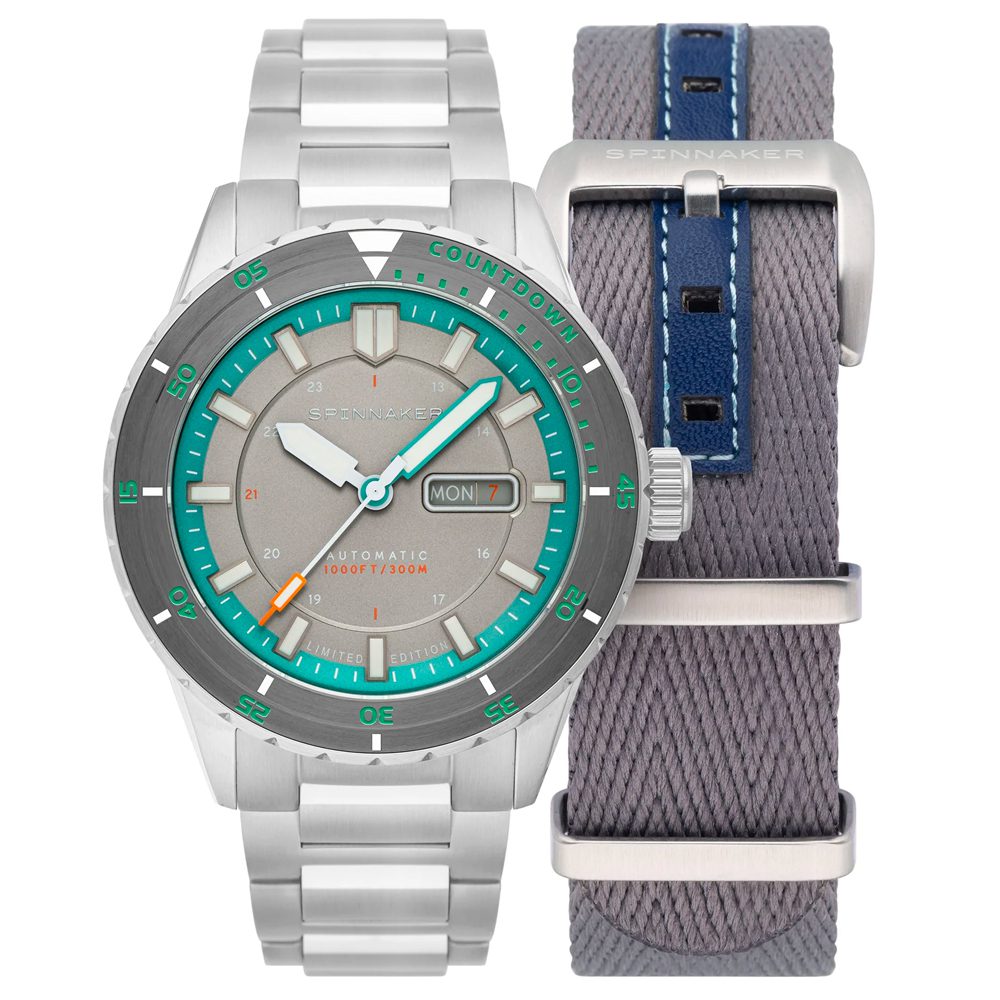 This wallet-friendly diving-watch brand has delivered again on this collaboration with the Marine Conservation Society, a UK-based ocean protection charity, to create a watch inspired by Austrian marine biologist Hans Hass.

The strap is made from recycled plastic, it’s good to 300m, so you can wear it with your wetsuit, and the grey and turquoise colourway is fun without being out-there. It’s also powered by a Japanese automatic movement, so no need for those pesky polluting batteries. 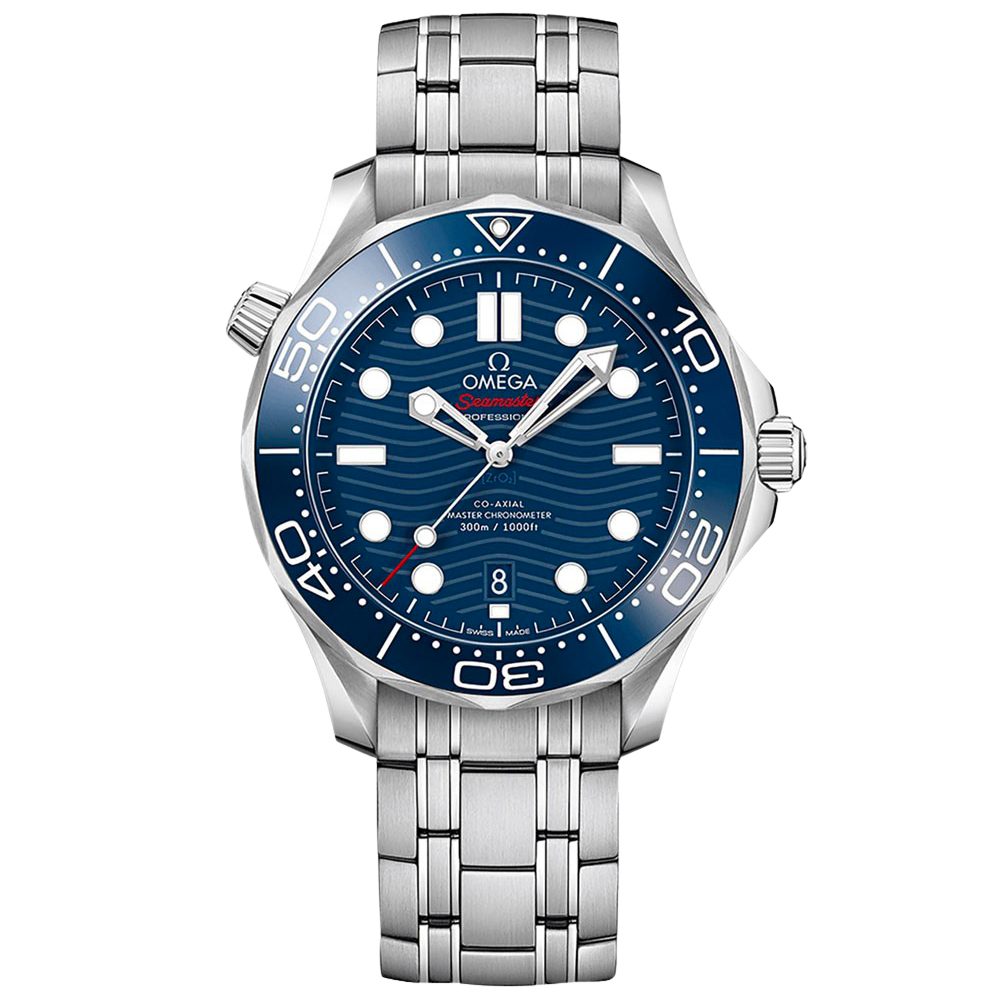 There are many ways to drop serious dollars in this category but if you’re going to spend a bit more, buy an icon. By which we mean the Omega Seamaster.

Launched in 1948 to commemorate the brand’s 100th anniversary, it achieved fame in the 1990s when the Seamaster 300 was selected to be James Bond’s new watch, proving you can wear a diver with a dinner suit.

There are a few complications out there – calendars, time zones, the tourbillon – but realistically the one additional extra that you will use, and more importantly can afford, is the chronograph.

First debuted in the Longines Calibre 13.33Z in wristwatch form, the basic chronograph (we’re not getting into the realms of split seconds or flybacks here as they increase the price) is the most democratic of complications found in timepieces costing £500 pounds as well as those fetching £85,000.

You do need to know what you’re buying though, so before you start shopping, we might suggest you read our comprehensive chronograph guide here. Now you’re prepared, all you have to do is decide on cam or column wheel, modular or integrated, and what colour the sub dials should be. You can buy cheaper chronographs, usually from Japan or China, but this is a chance to own a timepiece powered by the legendary Valjoux 7750.

Built in the 1970s by Ebauches SA, which has been subsumed into the Swatch Group, it was a robust automatic chronograph movement specifically designed for mass production. It wasn’t until the 1980s – when names such as IWC, Longines and Omega were being resuscitated post-Quartz Crisis – that its industry-wide value became appreciated.

It is now recognised as an iconic movement, with watch aficionados claiming you know a timepiece is powered by this movement thanks to the stiff pusher action and the way the second’s hand kicks back slightly as the chronograph engages. 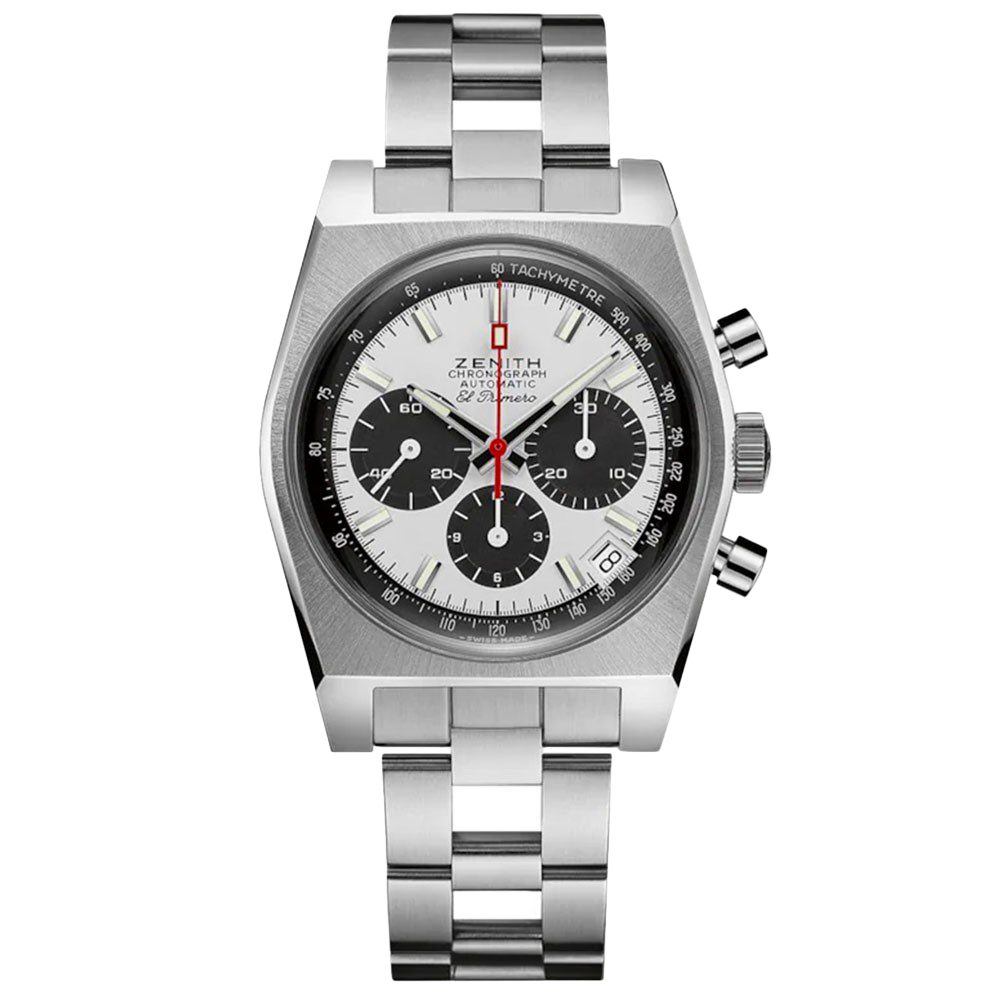 A few grand more will buy you another iconic chronograph movement: the El Primero. Technically, in 1969, Zenith became the first brand to announce it had developed an integrated chronograph movement, where the chronograph components are included in the calibre rather than being stuck on after.

However, the movement didn’t debut until September allowing other groups to launch first. It was still the first high-frequency, fully-integrated automatic chronograph beating at 36,000vph, in contrast to the 19,800vph of the Chromatic – from the Heuer, Dubois Depraz, Hamilton, Buren and Breitling consortium, later renamed Calibre 11 by TAG Heuer.

For extra horological history points, this model is a revival of the first watch, the A384, to house the El Primero back in 1969.

Buy now at Watches Of Switzerland

This could also be called the ‘dress watch’ category. However, dressing for dinner isn’t something one does much anymore and the more relaxed rules around black-tie dressing mean you could probably get away with a Flik Flak under your tuxedo sleeve if you did it with enough panache.

So, this should be considered the classic timepiece: three hander, precious-metal case (if you can stretch to it), leather strap… something that you would traditionally pass down the generations.

Unless you’re eyeing up a full bussdown (a watch custom-coated in diamonds), this will be the most you will spend on a watch. The key here is restraint. Slender, elegant hands; a slim, usually gold, case; buttery-soft leather strap in a muted tone. These are timepieces that will stand the test of time. The only way you’re going to find a steal in this category is by opting for steel. And the Dandy from Chaumet fits this particular style brief perfectly.

The cushion-shaped case gives it flair, while the delicate bayadere stripes on the dial are from the 1920s and said to be inspired by the ribbon-seams of a dinner suit. It is sophistication in steel. If there were such a thing as a Horological Picture Dictionary, the Calatrava would be image defining the term ‘dress watch’. It is the quintessence of this category.

First launched in 1932, it was designed by English horologist David Penney and inspired by Bauhaus principles. It is a watch stripped down to its barest form – no frills, no flourishes, just pure elegance and perfect proportions.

Despite being 90 years old, the design of the Calatrava, named after the ornate cross, used on the marching banners of the Calatrava knights who defended their eponymous fortress against the Moors in 1158, has barely changed.

Patek Philippe may have flirted with a Pilot Calatrava or experimented with Breguet numerals, but it is this tapered-hand, rose-gold cased, ivory-dialled design that has endured.

You’re well versed in watch brands now; you know there’s more to life than Rolex, while secretly hoping to discover a mint-condition steel Submariner in a relative’s loft. It’s time to invest in a niche brand that you’ve fallen in love with whose name won’t be familiar to the masses.

This is where you can have some fun, express yourself a little, lean in to a detail or type of watch that you’re passionate about. It could be a love of coloured dials, a crazy complication, steampunk 0 whatever it is it will be unique to you. But if you’re stuck, here’s a couple of suggestions. The USP of this particular Scottish brand is its dials. anOrdain is one of the only watchmakers outside of Switzerland and Japan that produces its enamel dials in-house.

Its four highly-trained enamellers are able to make both opaque and fume (where the colour is gradated from a vibrant middle to a smoky edge). It’s a skill few apart from the major Maisons, usually ones that are vertically integrated, care to invest in, which makes this British outfit even more impressive. No one pushes the possibility of what a timekeeper can look like more than Max Büsser and his Friends. It’s not surprising he calls these creations – which are often made in collaboration with the best names in independent watchmaking – ‘machines’.

They are certainly more than watches, with inspirations ranging from spaceships piloted in 1980s Japanese anime to mid-century automotive and aviation design to frogs. Büsser has said that he always aims to bring a child’s sense of awe and playfulness to high-end watchmaking. Whether you like what he does or not, you can’t help but be impressed by it. What he creates really is awesome.