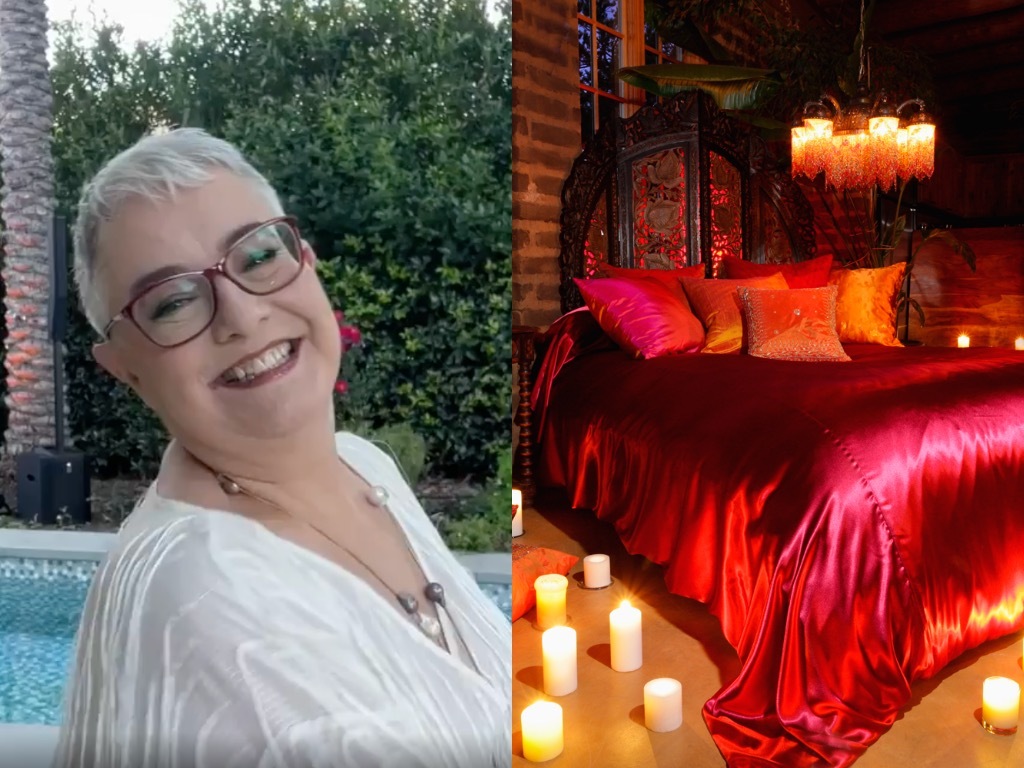 Melanie Rose is a luxury interior designer … who happens to have a passion for getting people in the mood.

Rose hosts Netflix’s How to Build a Sex Room, a series in which she meets with people to discuss their intimacy issues, then gives a room in their home a sexy makeover. Over the course of eight episodes, Rose adds everything from stripper poles to silk pillows to “sex rooms,” which most often begin as unfinished basements or unused spare bedrooms.

In an essay for Newsweek, Rose explained her philosophy on the decadent rooms. “If you have a room dedicated to sex, you’re more likely to use it,” she wrote. “It’s creating intimacy for those couples or for those people.”

But not everyone finds Rose’s work so straightforward. This week, Rose took to Instagram to share that a Pinterest board she’d been keeping with products, decorating ideas and other highlights from the show was removed by the platform. “Not happy,” she wrote in the post. “They could have told me which photo it was that crossed their boundary. I would have removed it straight away. But Pinterest didn’t, they took down the whole board instead.”

Fans of the show were quick to comment, sharing the positive effect it’s had on their own relationships.

“What the heck?” wrote one follower. “This show is so sweet. My husband and I loved it, and got so inspired to fix up our bedroom.”

“More sex UN-positivity,” wrote another. “Shame on you, Pinterest.”

Rose tells Yahoo Life that, like most designers, she “really loves Pinterest” and “maintains several boards there.” Other boards on Rose’s Pinterest page include everything from Christmas decor to kitchen design ideas.

“When the Netflix show How to Build a Sex Room, dropped in July, I started a new board ‘#Howtobuildasexroom’ in response to some of the many questions and inquiries I received,” says Rose. “One of the rather surprising consequences of the show was the world-wide conversation it started around sex and sexuality. I cannot tell you how pleased I am that the overwhelming consensus praises the show’s inclusivity and positivity.”

Video: Melanie Rose on ‘How to Build a Sex Room’ misconceptions

Rose says Pinterest removed the board without warning. After emailing Pinterest to ask for the board to be reinstated — even adding a link to the Netflix show as an explanation of the reasoning behind it — she was told her request had been denied. “Well, I lost my request to reinstate my HTBASR Pinterest board,” she wrote in a follow up Instagram post. “I will share the photos of How to Build a Sex Room elsewhere. HTBASR is a sex-positive show, including the rooms.”

But how far is “too far” according to Pinterest? While Pinterest did not respond to Yahoo Life’s request for comment, the social media platform’s community guidelines prohibit “fetish imagery, vivid sexual descriptions, graphic depictions of sexual nudity and images of nudity where the poses, camera angles or props suggest pornographic content.”

“We do our best to differentiate between pornography and other mature content,” the guidelines state. “For example, you can save content about sexual health, breastfeeding, mastectomies, art, education and well-being with adult nudity given the non-pornographic context, but we may limit its distribution so people don’t run into it accidentally.”

According to Rose’s Instagram, her plan is to “move onward and upward” following the incident, but she’ll proceed with caution.

“I have been informed by Pinterest that if I break any other guidelines and community rules then they will suspend my account,” she tells Yahoo Life. “It is heartbreaking to think that the many thousands of hours I spent building boards across a whole range of topics could be wiped away, without any real discussion or explanation.”