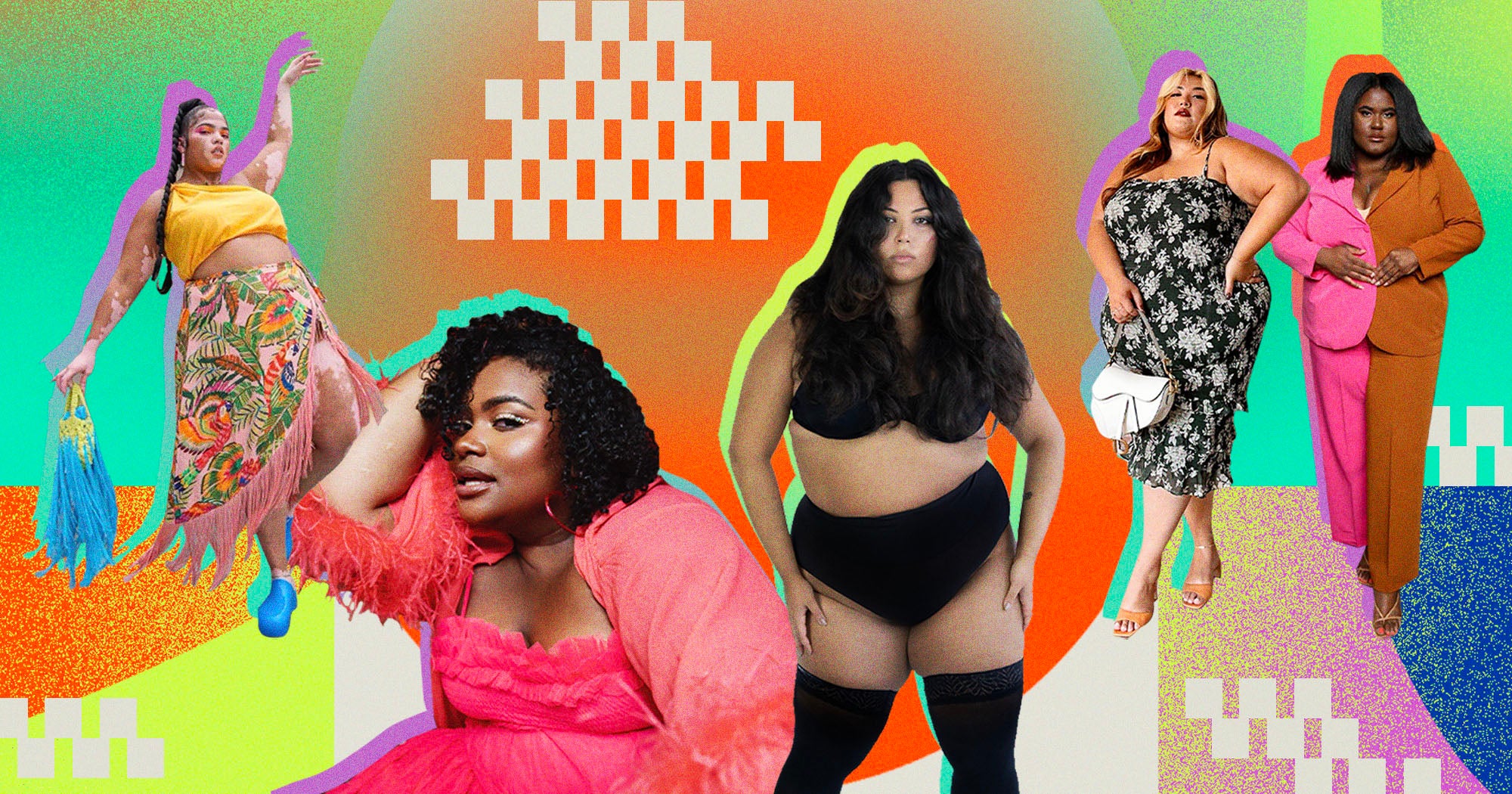 Seam by seam, the future of fashion is taking fold and becoming more size-inclusive. But the embrace of equality on the runways and in stores didn’t happen overnight — it’s what plus-size activists have been fighting for decades, what their years of work have amounted to. The painting is far from complete, but now, a new generation of advocates are flooding it with color.

From models and influencers to magazine editors, designers, and stylists, fashion is being transformed from the inside out to reflect the very consumers it long rejected but now aims to serve — if only to take advantage of the $24 billion market potential. Welcome to the stage: the fat-sionistas.

“I do believe and dream that there is going to be a better industry,” says Ava Hariri-Kia, a model who — alongside names like Yumi Nu, Paloma Elsesser, Devyn Garcia, and more — is creating forms of representation that will have lasting results. “And I’m excited to be a part of that change and see it happening.”

Ahead, Hariri-Kia and nine other trailblazers reflect on how far the fashion industry has come and where it needs to go next.

Hariri-Kia never thought she’d be a famed fashion face. But beyond her editorials — which have ranged from Vogue to Calvin Klein — the model hopes to be known for her message: “I want every woman to just feel themselves and exist with no boundary.”

Yamell Rodriguez, a model signed to the btwn in NYC, agrees with this sentiment. “Growing up plus-size, you have these [beauty] ideals that you’ve been brainwashed with, whether from media, family — whatever the case may be,” she says. “I had a lot of self-doubt, experiencing imposter syndrome in the sense of thinking ‘I don’t belong here’ in fashion and modeling.”

Beyond doing what they love, Hariri-Kia and Rodriguez provide levels of visibility that are still considered groundbreaking in fashion today — not only as plus-size models but as an Iranian American and Afro-Latina woman with vitiligo, respectively. “My existence in its entirety shouldn’t be radical,” says Hariri-Kia. “I want to be in this industry as I am, as Hariri-Kia. Not as this tokenization, not as this boundary-breaking woman, but as a model.”

As Hariri-Kia points out, tokenization remains an issue in fashion. Only 51 plus-size models (or 5.09% of total castings) were used at New York Fashion Week in February 2022, according to The Fashion Spot. Of that number, many designers still use one curve model per runway show. All to say: The journey to normalization is far from complete.

“Fat should just be fat in the same way thin is just thin,” Hariri-Kia says. “Beauty comes within the values someone has, not with the way you look.”

This is an extension of the movement that began in 2014 when Ashley Graham and the women of ALDA, a group dedicated to bringing inclusive change to the modeling world,  marched into IMG Models with a vision of what fashion’s future could look like; in 2017, it resulted in Graham becoming the first plus-size model to appear on the cover of American Vogue.

“This is the generation of body diversity. It makes me hopeful seeing so many people doing the work to get us where we need to go,” Rodriguez says. “This is not a momentary thing, but something that will become the norm.”

“I think about this constantly: What is that next era?” says Jordan Bogigian, social media specialist at Fashion to Figure. “I want to run it.”

In the plus-size space, content creators possess a stronger power than just influencing shoppers to buy the products they wear: They often hold a brand’s hand through the baby steps toward size-inclusivity — advising them on how to expand sizes and authentically connect with consumers like, most recently, Remi Bader did with Revolve’s first extended size collection with the content creator.

“It’s a two-way street, and we’re marching,” says Samyra, a popular TikTok influencer and Harvard graduate. “How can you expect us to feel [accepted] in this space when time after time, you’ve told us you don’t want us there?”

Samyra believes the answer is in influencers having a core role in continuing to help brands not solely expand their sizing, but also to bridge the gap between brands and customers by communicating the needs of the plus-size customer — their desires, their concerns— in a way other traditional methods have failed to do.

Abby Bible, a New York City-based influencer — who splits her time between content creation and a corporate fashion job — agrees that collaboration is key to progress.  “On Instagram, we can [keep advocating] all we want, but if we don’t have people sitting inside at those tables, it’s not going to happen.”

Bible also notes the importance of representation, particularly for people who have long been conditioned to dress a certain way for a thin-approving society: “In the media, in movies, in television — we still have so many negative body connotations around certain body types or features. There’s so much shame built around that, and people are still so uncomfortable talking about it.”

In this way, Bogigian sees herself as “editor-in-chief,” of sorts, providing style inspiration for people to express themselves that, before trailblazers like Gabi Gregg, Kellie Brown, Nicolette Mason, and Marie Denee — who formed a powerful community during the dawn of social media — was unheard of. “Social media has had a largely positive effect on my relationship with my body because I follow people who look like me and do badass things,” she says. “It’s not news to anyone that we need to democratize the rest of the media in the same way. The era of unattainability is over.”

Next, it’s time for acceptance and body normalization.“I long for the day where being fat on the internet isn’t inspirational,” Samyra says. “When it’s not an admirable fact to be comfortable in a bigger body.”

While fashion aficionados no longer tuck issues of Vogue to bed at night — instead turning to social media creators for style inspiration — designers, creators, and industry insiders are continuing to rely on the traditional media to inform and influence season after season. This is why fashion journalists like Aiyana Ishmael, editorial assistant at Teen Vogue, are intent on holding the industry accountable and pushing the conversation forward in their work.

Having graduated and made her way to New York City just a year ago, Ishmael’s time at Teen Vogue has been impactful. From crafting size-inclusive roundups to hot-button op-eds, her growing voice is resonating industry-wise, as is her personal style.

“Looking at the runways we go to and fashion shows we see, a lot of designers still aren’t incorporating plus-size models,” Ishmael says. “And if they are, they’ll use the same type of variation of the plus-size model. It’s something I’ve noticed all my life because I’m not a pear-shaped plus-size person [like many of these models].” She notes how media can play a direct role in changing that.

“There are so many exciting things happening every day in plus-size fashion that deserve to be talked about,” confirms Mayra Mejia, freelance writer and former editor at The Curvy Fashionista. “We know that the bigger brands — like Torrid and Lane Bryant — are pillars [for the community]; they’re institutions. But there are so many people out there that want [more].”

Tyler McCall, former editor-in-chief of Fashionista.com, says that while she’s “seen more of a consideration given to plus-size [models and brands], whether it’s inclusion in market stories or coverage of the market,” it’s still not enough. “[Plus-size fashion journalism] is still pigeonholed as its own unique ‘thing’ rather than an issue which impacts a broad swath of the industry,” she says. “I’d like to see more follow-up when brands announce an extension of sizes. I’ve too often seen that big announcement get tons of press, only for the brand to very quietly duck back out of the market in a few seasons.”

Mejia agrees that plus-size fashion shouldn’t be overlooked by mainstream publications: “It isn’t frivolous. It’s foundational. For many, they’ve discovered body positivity and fat liberation through fashion. When it comes to inclusivity, there’s always something more that we can do.”

While some people are using their voice to push for change in the industry, designers and stylists are working on the inside to make the plus-size selection better: “Retail spaces need to have more accessible sizes,” says Kyeshia Jaume.

She hopes to use her design role at Forever21 — which involves monitoring trends and popular styles, as well as analyzing fit — to communicate to brands what shoppers crave. “Even if it means changing the strap from a quarter inch to three-eighths inch just so that she has a little bit more broad coverage, making sure that button size looks proportionate, adding elastic to something, or changing a detail on the garment to make sure that it’s wearable for the customer — being able to bring that level of change from the inside, even if it’s in little ways, is super powerful for me,” Jaume says.

While these steps are crucial for more brands to expand their plus-size selection and improve fit, ethical stylist Kat Eves — who dressed celebrities including Caleb Hearon, Steph Tolev, and Dulcé Sloan — says that the next frontier should be growing size-inclusivity in the sustainability space that continues to overlook plus-size shoppers.

“Part of being an ethical brand is centering inclusivity. You can’t really be ethical if you are exclusive,” she says. “Ethical fashion is especially important to plus-size people because we come from a place of being treated as less than, so that’s even more of a reason why we need to be committed to not marginalizing.”

And exclusivity has never been so out of fashion.

Like what you see? How about some more R29 goodness, right here?

Size-Inclusive Intimates Can Change Everything

Why Don’t Brands Carry Plus Sizes In Store?