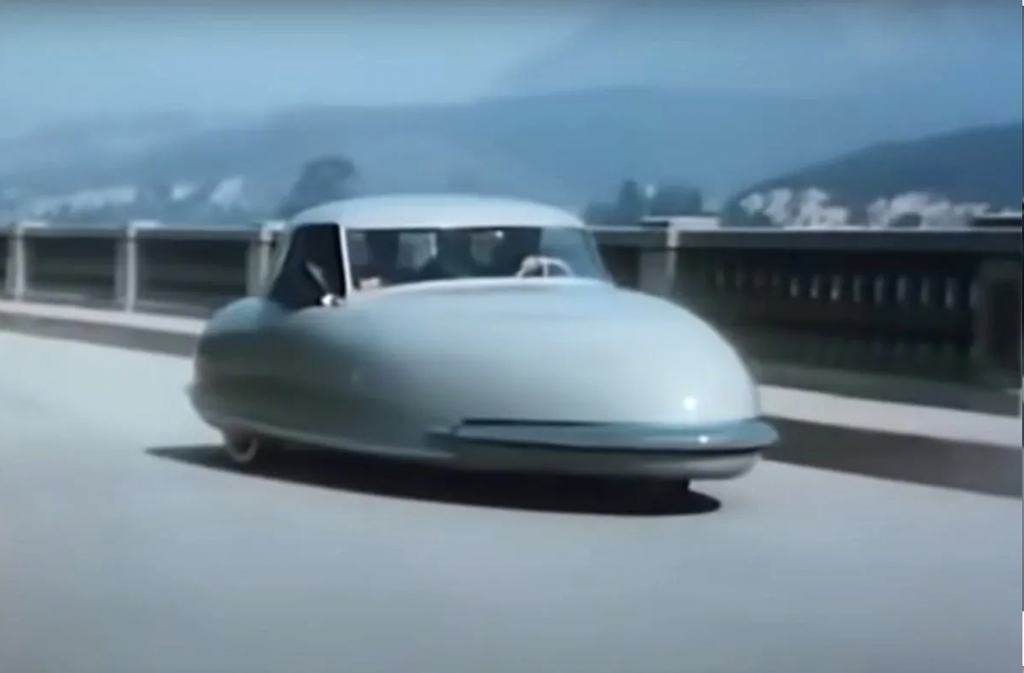 With a few exceptions, car design of the last two decades has been stuck in a rut, with a sameness on the outside—-aerodynamic, sleek, rounded—-hiding the advancements under the hood and in the control panel. That’s why it’s always a hoot to check out mock designs from the past, especially when they are being used to forecast the future.

This short 1948 film from Popular Mechanics shows three possible cars of the future, all of which for various reasons, never really caught on. But films like this offer a tantalizing thought-—what if they had? It’s a tiny glimpse of an alternative reality, and we all seem to be loving that multiverse vibe these days.

The first is the Davis Divan, which is perfect for parallel parking with its single front tire and tight maneuverability. It certainly looks cool but I will disagree with the narrator: no amount of space-age oomph is going to make changing a tire an “exhilarating experience.” The Divan was built by the Davis Motorcar Company of Van Nuys, CA, designed by used-car salesman Gary Davis, and included ideas taken from the aeronautical industry. This film appearance was part of a major publicity push from 1947-1949, but in the end only 13 Divans were produced, and a dozen survive. Not so the company, which was sued into liquidation after it failed to deliver product.

The second has an even stranger history. If this is a “car from the future”, then the filmmakers neglected to note it’s actually from 1935. The Hoppe & Streur Streamliner prototype was designed and built by Allyn Streur and Allen Hoppe as part of Consolidated Aircraft San Diego, and based on a Chrysler 66 chassis. It seated five people. If it looks like flimsy metal on top of a skeletal frame, then you’ve guessed correctly.

You can see how Southern California’s aerospace industry has started to influence everything after the war, which accounts for the airplane obsession with these autos, especially what comes next. The final selection is Gordon Buehrig’s TACSO prototype from 1948. Several of the controls in the driver’s seat imitate those found in the cockpit of a plane, and the four wheels are covered in fiberglass directional fenders. Not noted in the film: the car had “a transparent roof that could be removed to let the wind in,” a feature way ahead of its time. But it would have been too expensive to mass produce (AutoBlog figures one of these would have cost the equivalent of $80,000 back in the day) so the one in the video is the only one in existence.

As people are still trying (and failing) to successfully parallel park, safe to say none of these predictions came true. Partly, that’s sad. On the other hand, next time you hear some doom-n-gloom prediction of our current moment, think on this video and how thankfully wrong they were.

Nikola Tesla’s Predictions for the 21st Century: The Rise of Smart Phones & Wireless, The Demise of Coffee & More (1926/35)

Buckminster Fuller, Isaac Asimov & Other Futurists Make Predictions About the 21st Century in 1967: What They Got Right & Wrong

Ted Mills is a freelance writer on the arts who currently hosts the Notes from the Shed podcast and is the producer of KCRW’s Curious Coast. You can also follow him on Twitter at @tedmills, and/or watch his films here.