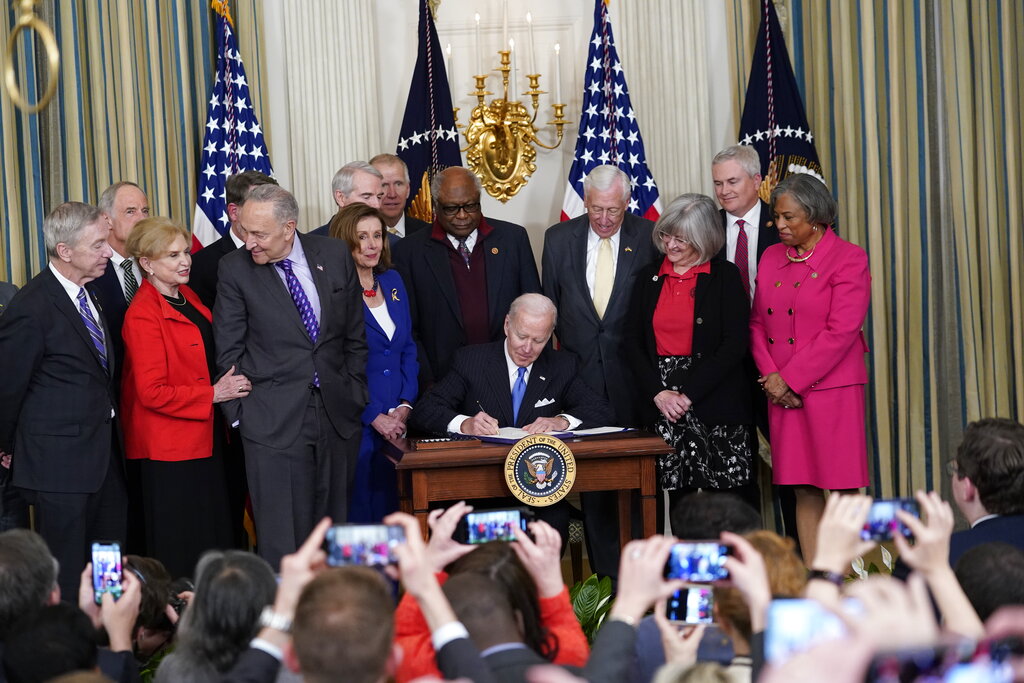 “Late this afternoon after a routine test, I tested positive for COVID-19. I’m so thankful to be both vaccinated & boosted, and at the advice of the Attending Physician I plan to isolate. If you haven’t gotten your shot yet, I encourage you to do so,” Warnock wrote on Twitter.

Collins was among those who attended last weekend’s Gridiron Club dinner in Washington, which has so far reported more than three dozen cases among attendees to the event. In a message sent to members on Thursday evening, the club said that they had learned of 37 positive tests among dinner guests, including two at the head table. Attorney General Merrick Garland and Commerce Secretary Gina Raimondo, who also attended, said that they had tested positive.

PREVIOUSLY: Sen. Susan Collins (R-ME) has tested positive for Covid, her office announced, just a couple hours after she was on the Senate floor to cast one of three Republican votes to confirm Ketanji Brown Jackson to the Supreme Court.

Her office said that she was experiencing “mild symptoms,” and would “isolate and work remotely in accordance with CDC guidelines.”

Collins was among those who attended last weekend’s Gridiron Club dinner in Washington. More than a dozen other attendees have said that they have tested positive, including Attorney General Merrick Garland and Commerce Secretary Gina Raimondo.

PREVIOUSLY: House Speaker Nancy Pelosi has tested positive for Covid, amid concerns of an outbreak among top leaders in D.C.

Drew Hammill, spokesman for the speaker, said in a statement on Thursday, “After testing negative this week, Speaker Pelosi received a positive test result for COVID-19 and is currently asymptomatic. The Speaker is fully vaccinated and boosted, and is thankful for the robust protection the vaccine has provided.  The Speaker will quarantine consistent with CDC guidance, and encourages everyone to get vaccinated, boosted and test regularly.”

Pelosi was on stage with President Joe Biden at a White House event on Wednesday to sign postal service reform legislation, as well as at an event on Tuesday to mark the anniversary of the Affordable Care Act. Biden, former President Barack Obama and Vice President Kamala Harris also were there.

She was not present at Saturday night’s Gridiron Club dinner, a white tie gathering that drew lawmakers, cabinet officials and media personalities. The Gridiron Club, made up of top D.C. journalists, said that they know of 14 cases so far among attendees at the event. They include Attorney General Merrick Garland and Commerce Secretary Gina Raimondo, as well as Rep. Adam Schiff (D-CA) and Rep. Joaquin Castro (D-TX).

Pelosi’s positive test raised further concerns of exposure to the president. The White House said that Biden tested negative on Wednesday evening, and that he was not considered a “close contact of Speaker Pelosi as defined by the CDC.”

White House Press Secretary Jen Psaki, who herself quarantined after testing positive last month, told reporters on Wednesday that “we continue to take measures that go beyond what the CDC protocols are.  That includes ensuring that everybody who’s going to see the President in a meeting is tested in advance — or if you’re traveling with the President, you’re tested in advance.”

Pelosi’s announcement came just as she was schedule to headline her weekly press conference. After the news, the event was canceled.

The House lifted its mask mandate just ahead of Biden’s State of the Union address on March 1.