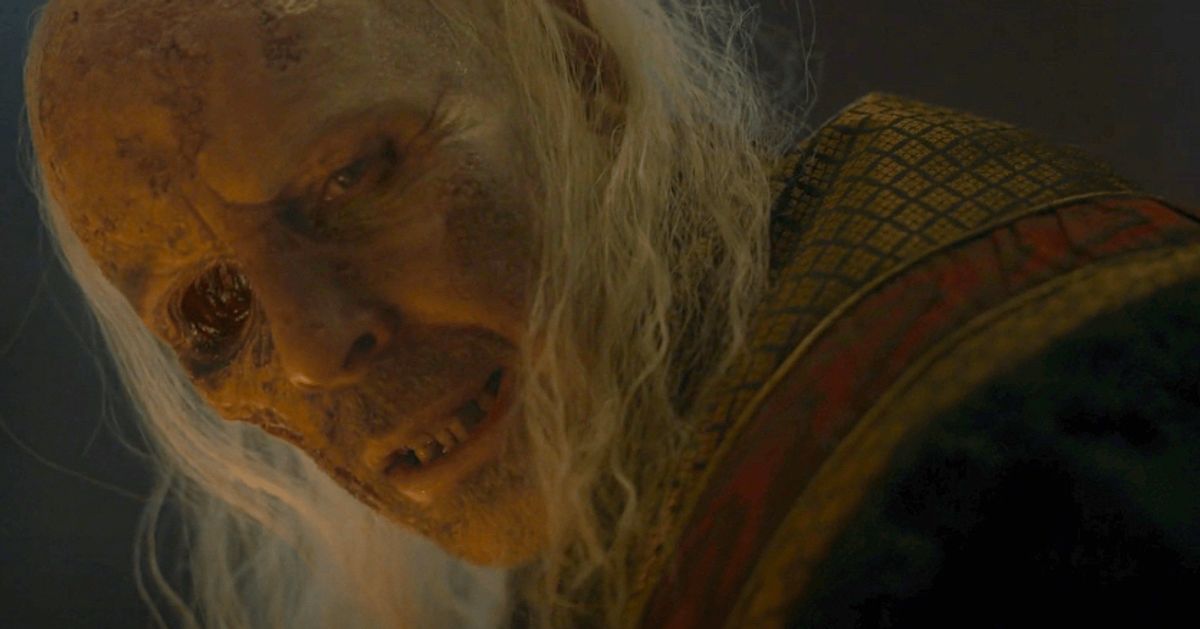 Barrie Gower won three Emmys for his prosthetics work on “Game of Thrones.” In an interview Sunday with Variety, he revealed just how “grounded” his research for prequel series “House of the Dragon” was — and how he turned King Viserys Targaryen into an ailing husk of a man.

“We researched various flesh-eating disorders,” Gower told Variety. “Necrosis, leprosy, all kinds of horrible references. Lots of interesting shapes, colors and ulcers. They could give us a good indication for textures, colors, glosses, how dry things would be.”

Warning: Spoilers for “House of the Dragon” below!

Those caught up with the record-breaking HBO show have witnessed Paddy Considine give a heartbreaking performance as Viserys. With two time-jumps forming the narrative, the pustule-ridden king first loses an arm, then an eye and half of his face — before dying at the end of Episode 8.

“Over the course of the season we had about seven different stages, which would be told through his make-up, hair, the receding hairline, the pallor and the color of his skin, texture of the skin, and then various small sores on the body,” Gower told Variety.

Gower won an Emmy in September for creating the demonic “Stranger Things” antagonist Vecna. His most famous creation was arguably the Night King, however, who threatened to conquer all of Westeros in “Game of Thrones.” Its current prequel series saw Bower get rather creative.

“We had little silicone molds that you can press onto the skin and peel them off,” Bower told Variety. “We had cheek appliances, little sores that were shaved into Paddy’s own beard and his hairline. With the silicone bald cap, we could recede the hairline and had sores in there.”

Bower used a “body double who was very slender and had a very pronounced bone structure” to showcase Viserys’ decline after the second time-jump. They then shot the same scene with Considine and used visual effects “to manipulate Paddy’s face onto the double’s body.”

Viserys famously removed his golden mask in Episode 8 to reveal the open cavities in his eye socket, cheek and jaw. Bower covered Considine’s entire face with a prosthetic but painted the affected areas green, which visual effects altered them in post-production to achieve the decrepit look.

From a “small, grape-sized ulcer on his back” in the first episode to the skeletal king’s haunting death, Bower certainly accomplished bringing a flesh-eating disease to the screen. Fortunately for fans, he’s now working on HBO’s “The Last of Us” — in which an airborne fungus physically tears human beings apart.

Read the whole interview on Variety.