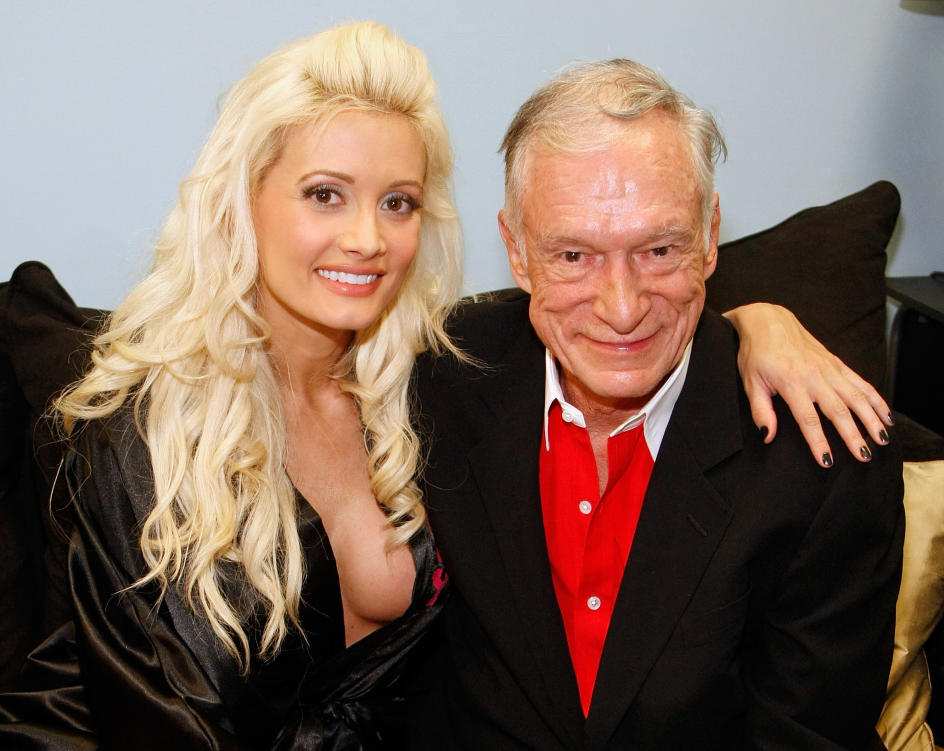 Holly Madison is continuing to speak out about her time at the Playboy mansion, this time on the Power: Hugh Hefner podcast.

Madison became one of Hefner’s girlfriends at age 21 and recalled their “traumatic” first night together. The former Girls Next Door star, now 41, had an unconventional first date with the publishing mogul when she went to a club with him and a group of other women.

“I wasn’t necessarily expecting to have sex that night, I thought it would be more of a, like, first date — even though obviously it’s not a very traditional first date. I thought it would be more the type of thing where I saw what happened, saw what was going on. If I wasn’t comfortable with it I wouldn’t have to do anything and I could make my decision on whether I wanted to come back for date number two or not,” she shared. “I wasn’t necessarily expecting to have sex that night and I definitely was not expecting to be the first one to go that night but I was wasted, he was literally pushed on top of me, and after it happened, I was just mortified and embarrassed and it had way more of an emotional impact on me than I thought it would.”

Madison said she admired Hefner from their previous, albeit “limited” interactions, and it wasn’t the fact she had sex with him that “repelled” her.

“It was more the group aspect that was really out of my comfort zone and just the feeling of ‘Wow, OK, that happened. Everybody knows it happened,'” she explained. “I kind of all of a sudden felt like everybody was going to know about me, and I was horrified by it.”

The next morning, Madison asked to move in to the mansion because she felt like “that was demanding respect in a way.”

“I felt like if I didn’t do that I was just going to be haunted by this experience,” she said, calling their night together a “traumatic experience.”

Madison also detailed the alleged tactics Hefner used to control the women in his life. The former E! star claims the Playboy founder took nonconsensual, explicit photos of her and other women.

“When girls would go out with Hef, in the limo and in the nightclub and come back to his room after, he was constantly taking photos of these women on his disposable camera. And these women were almost always intoxicated. I know I was heavily intoxicated,” Madison alleged. “They wouldn’t just be his regular girlfriends. They would be new girls who were joining him for a night for the first time, or women who had flown out from across the country to test for a centerfold in, you know, allegedly professional conditions. And they’d be invited out and oftentimes would be pressured, not necessarily directly by him, he would have some of his girlfriends do it too, pressure them to come upstairs. Anyway he’s constantly taking all these pictures.”

Madison continued, “So if you were messed up and if you were in his bathtub with your top off and some other girl is doing some sexually explicit pose on you and he took a picture of that on his disposable camera, he’d make a copy and give it to everyone that night and put it in a scrapbook.”

“You’re taking these pictures, they’re not consensual because you’re so wasted, and the next morning you find out they’ve been given out to everybody who was out with you? I don’t know if he just assumed that was OK because all these women want to be in the magazine so bad so they must be OK with getting naked, so I’m going to take pictures while they’re wasted and just hand those pictures out,” Madison added. “That’s the kind of thing that can make you feel kind of stuck in a situation or over-invested in it. It’s one of those things that makes you feel a little more backed into a corner.”

Madison explained that it isolated her from her normal life even more.

“You feel very labeled, you feel very like, ‘How can I ever go back to a normal life? I’m going to be ostracized,’ kind of a feel. You feel very all in, way more all in than you ever meant to be,” she said.

Madison, who dated Hefner from 2001 to 2008, eventually found out one of the girls was posting the explicit photos online.

“I went to Hef and said, ‘Can you stop handing out our naked pictures to everybody, because one of the girls is putting it on the internet?'” she recalled. “I was kind of afraid to speak up to him but that was the extreme measure it took for me to finally say to him, ‘Hey, can you stop handing these photos out?’ I was already a year sunk into that situation at that point.

Hefner purportedly told the woman posting the images that Madison ratted her out.

“What adult person goes back and is like, ‘Hey so and so, can you stop posting un-consensual naked photos on the internet? — oh and by the way, Holly told me, Holly narced you out,'” she claimed. “He knows what he’s doing… It’s disgusting. That would never be accepted today.”

Before Hefner’s death in 2017, he denied similar claims from Madison about their time together.

“Over the course of my life I’ve had more than my fair share of romantic relationships with wonderful women,” Hefner previously told Us Weekly when Madison released a tell-all memoir. “Many moved on to live happy, healthy and productive lives, and I’m pleased to say remain dear friends today. Sadly, there are a few who have chosen to rewrite history in an attempt to stay in the spotlight. I guess, as the old saying goes: You can’t win ’em all!”

WATCH: Madison is participating in A&E’s new docuseries Secrets of Playboy, in which she describes alleged emotional abuse suffered during her time at the mansion: