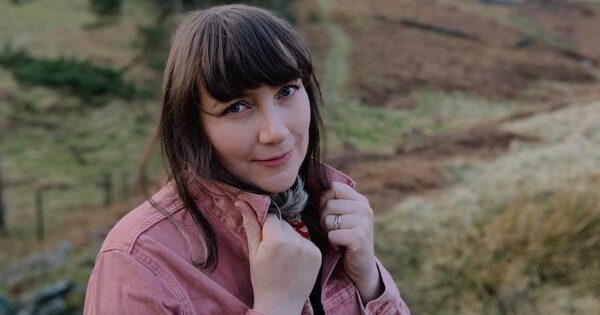 Harkin – the solo project of multi-instrumentalist Katie Harkin – has shared a new song from her recently announced album Honeymoon Suite, which is out June 17 via her own Hand Mirror label. ‘A New Day’ is the second single from the record, following ‘Body Clock’. Listen to it below.

Speaking about the song, Harkin explained in a press release:

‘A New Day’ is a love song that sprang from glitter and grief. It feels apt to be releasing it in spring because it chronicles my journey from mourning the past to hope for the future.
The song itself grew from a pulsing sampler part I made from recording a charity shop keyboard that I’ve since given away to my friend’s daughter. It feels right that the instrument that birthed it should continue to circulate as this song will now.

When I was writing the lyrics, the twinkling keyboards made me remember something I read about why we humans are so drawn to glitter. That on a primal level it reminds us of the glint of clean water. The dance of beauty and utility inspires me greatly. I continue to look for clues.

Honeymoon Suite, which finds Harkin self-producing for the first time, features brass by Nate Walcott and Aaron Roche, slide guitar by J.R. Bohannon, and backing vocals by Sophie Galpin. “I’ve worked in all manner of studios and assumed many different roles in music making,” she said. “I had thousands of flight hours but I had still never been the pilot. Owning the role of producer was more of a mental block than anything else, but circumstance dissolved that intimidation. Working on Ashley’s soundtrack early in the pandemic gave me the confidence to continue producing my own solo work. I won a grant from the PPL Momentum Accelerator Fund which would cover the mixing and mastering if I could be self-sufficient in recording. It felt like the quest I needed to push me into discovering this new direction.”