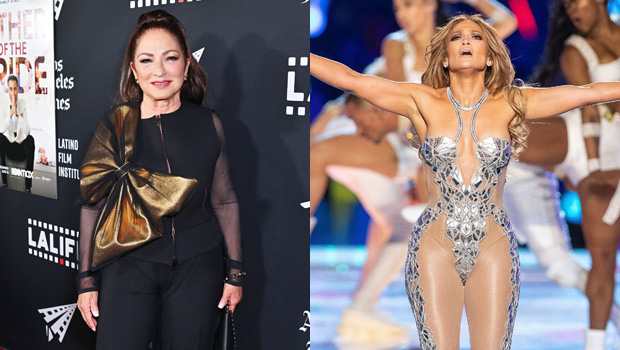 Gloria Estefan has spoken out about Jennifer Lopez‘s disappointment when she found out she would not be the only performer taking the stage at the 2020 Super Bowl.  “Look, this is the bottom line. You have very little time, like 12 minutes or something, to get things on and off the set. So, could you do it with one person? Yes, but I think they wanted to throw a Miami and Latin extravaganza and they tried to pack it as much as possible,” Gloria, 64, said during June 21’s episode of Watch What Happens Live with Andy Cohen. More directly addressing Jennifer, she added, “Okay, and imagine what J.Lo would have said if I was the third [performer]!”

It came out in early June that the “On The Floor” singer, 52,  was furious she had to share the stage with “She Wolf” singer Shakira, 45, at Super Bowl LIV in a 12-minute set. “We have six f—king minutes. We have 30 seconds of a song, and if we take a minute, that’s it, we’ve got five left,” J.Lo complained to her music director, Kim Burse, in her Netflix documentary, Halftime. “We have to have our singing moments. It’s not going to be a dance f—king revue. We have to sing our message.” She went on to say the show was the “worst idea in the world to have two people do the Super Bowl.”

In her chat with Andy Cohen, Gloria revealed she also had the chance to perform with the two Latina idols, but declined because it was “their moment.” Gloria has performed at two Super Bowls in the past, in 1992 and 1999, according to the Miami Herald.  She also joked that she “didn’t want to go on a diet in December,” which was her other reason for declining the performance.

Jennifer Lopez Through The Years: See Her Transformation From ‘Fly Girl’ To Full Diva

Jennifer and Shakira ended up having an energetic performance with a super special guest: J. Lo’s daughter, Emme! Following the riveting performance, J.Lo shared a video of the moments leading up to her performance, which included a sweet embrace with Emme. “All I want my girls, the little girls on stage with me and all over the world to know is how to use their voices and be proud of everything they are. We are proud to recognize that all of us together are what makes this beautiful country truly great,” she wrote in the caption.

Meanwhile, Shakira spoke about making history at Super Bowl LIV. “The best birthday gift has been the support of all my fans and the most amazing and hardworking team an artist could wish for,” she said in her first Instagram post following the performance. “We Latinos climbed Kilimanjaro and made history tonight and we couldn’t have done it without all of you!”