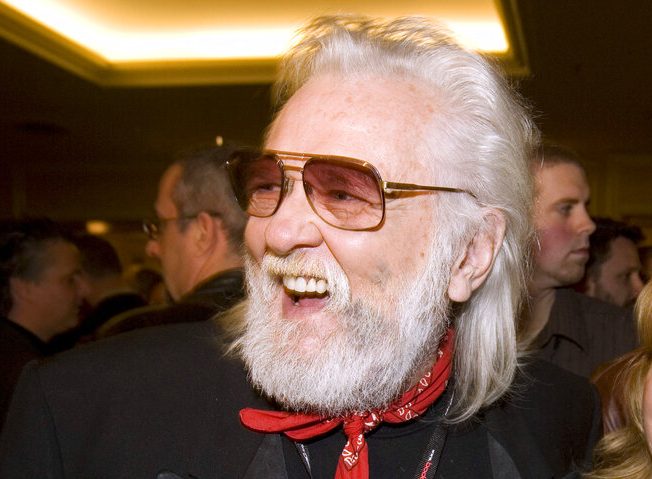 “He went peacefully and he looked as handsome as ever,” she told The Canadian Press news outlet.

Known for his enthusiastic stage presence, the singer of “Ruby Baby,” “Mary Lou” and Bo Diddley cover “Who Do You Love” was known as Mr. Dynamo, Sir Ronnie, Rompin’ Ronnie and the Hawk.

Hawkins was the founder of his backing band the Hawks, which played with Bob Dylan on his landmark 1966 first electric tour. .Five members of the Hawks, including Levon Helm and Robbie Robertson, would later form the Band.

Despite frequent clashes among the volatile personalities Hawkins joined the Band onstage as part of their iconic 1976 farewell show,  captured in Martin Scorsese’s concert film The Last Waltz.

“He was really good at gathering musicians that he thought were the best around,” Robertson said in a 2016 interview with The Canadian Press. “It was like a bootcamp for musicians to go through, learn the music and when to do certain things and not do certain things. He just played a real pivotal part in all of it.”

Born in Arkansas in 1935, Hawkins joined the army reserve after high school, then opened the Rockwood Club in Fayetteville, Ark., which became a popular concert stop for Jerry Lee Lewis, Roy Orbison and Conway Twitty, among others.

Hawkins eventually headlined the club with his own band, billing it as Ronnie Hawkins and the Hawks. It was the prototypical rockability band, all slicked black hair and sideburns.

In 1958, Hawkins did a Canadian tour and discovered the magic of Canadian audiences eager for more rock ‘n roll. He moved there and scored two singles on the Billboard Top 100 and appeared on “Dick Clark’s American Bandstand.”

Hawkins’s success is credited for helping other Canadian musicians cross over into the US market. His entrepreneurial skills, often lending musicians money and transportation, earned him the title “The father of Canadian rock ‘n’ roll” among the knowledgeable.

In 1969, the year that John Lennon and Yoko Ono staged their famous “bed-in” in Montreal to campaign for peace, the couple stayed on Hawkins’s farm in Mississauga, Ont., for a couple of weeks. T

Hawkins earned Juno Awards (the Canadian version of the Grammys) and was honored with a star on Canada’s Walk of Fame in October 2002.