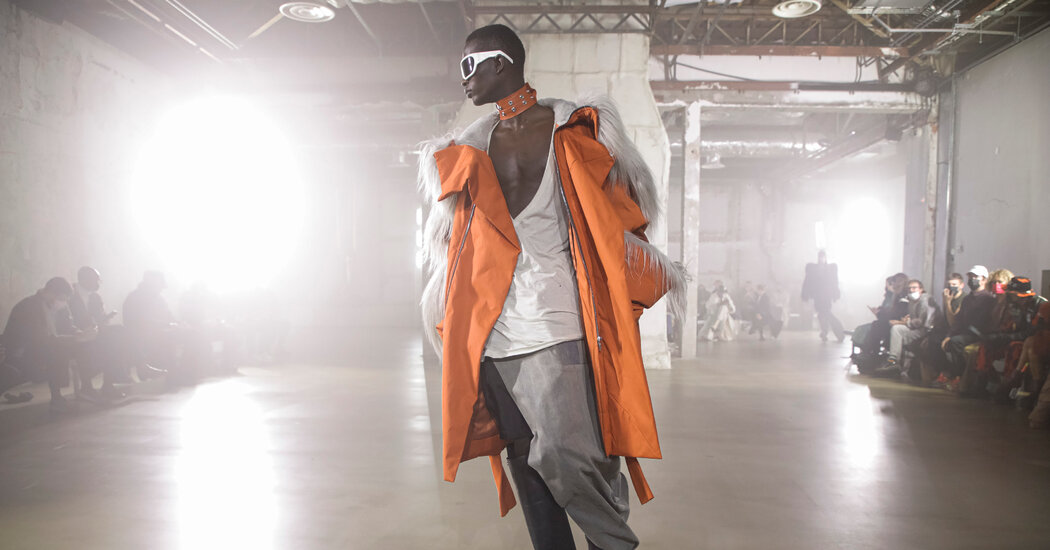 PARIS — It probably isn’t surprising that a current of conservatism was seen in the men’s wear shows here, a link connecting storied labels like Dior and Hermès, where the designers Kim Jones and Véronique Nichanian produced fall collections that highlighted their design chops by doubling down on heritage.

An inveterate and lifelong traveler (he has often said he works mainly to bankroll his wanderlust), Mr. Jones often operates within a geographic thematic. Last season, it was a collaboration with Travis Scott, inspired by the rapper’s Houston hometown. (The collection was postponed indefinitely following the Astroworld tragedy.) This time Mr. Jones detoured to safer territory and, for a 75th-anniversary homage to the house at Dior Men, chose as his destination — drum roll — Paris.

Mr. Jones’s City of Light was conjured as a place of Gallic elegance and refinement with a set that not only reproduced the gilded Pont Alexandre III bridge for its backdrop but went on to mine just about every French cliché in the postcard rack.

Think (gorgeously) tailored coats of slate or dove gray, some with a complicated draped wrap at the front. Think blazer coats with white overstitching and cut as if to reveal the selvage edge of the fabric. Think sling-back suede Birkenstocks patterned on the soles with the Dior logo. Think, for Pete’s sake, berets.

True, the berets were the work of Stephen Jones, the inspired British hatter who has worked with Dior for a quarter-century. True also, tourist shops all along the Rue de Rivoli still sell five euro versions of this felt pancake for your head. Yet there is no avoiding the fact that Parisians wearing berets are rarer than Parisians walking down the street with baguettes tucked under their arms.

Ms. Nichanian, too, plays on these French idioms, though at an even more elevated (and pricier) level. Season after season, she makes clothes suitable for the clientele of a brand that started in 1837 as a saddlery and remains a purveyor of goods for a traditional carriage trade. (Well, sort of: The company’s vaunted Birkin, the Brabus of handbags, has now been joined by the Rock, a new and jacked-up version ostensibly for guys.)

The presentation was held in a national storehouse for furniture and against a backdrop of projected tapestries from state collections, and before it, Ms. Nichanian spoke to some journalists about her intended “dandy effect.” Conceivably that means a collection generally pitched toward the younger guys everyone in the business has been trying to advance from hoodies to suits. Here one was rendered in a two-button calfskin with a wide leg that made you wish Miles Davis were alive to rock one. Davis, though, would certainly take one of those silk cashmere scarves Ms. Nichanian substituted for a cravat and knot it outside his shirt.

Elsewhere on the roster were designers with all kinds of promise, but also with positions and ideas. At GmbH, Serhat Isik and Benjamin Huseby produced a finely tailored collection that seemed destined, as usual, to influence designers at much larger houses. Whoever cast Virgil Abloh’s final, and predictably mournful, collection for Louis Vuitton, for instance, must have had an eye on GmbH’s runways.

Diversity is a GmbH signature. So, too, are references to Islam, here in the form of calligraphic texts of a kind that Ottoman soldiers would tuck under their armor as talismans. On the field on ideas, Mr. Huseby and Mr. Isik consistently confront the tensions between their lived realities as racially blended (Isik is Turkish and German, and Huseby is Norwegian and Pakistani), cisgender gay men and the broader culture.

Unlike in recent seasons, there were few “unisex” shows and a certain amount of collective amnesia about the goal of upending of gender binaries. That said, the GmbH show contained elements that could initially read as transgressive (thigh boots worn with shorts under crisply tailored one-and-a-half breasted blazers) until a viewer recalled that museums are chockablock with imagery of leggy 16th-century dudes in pantaloons, codpieces and tights.

“It’s the most formal collection we’ve ever done,” Mr. Huseby told Vogue.com. “But I feel it’s also the kinkiest and sleaziest in a strange way.”

Hybridity, though of a different kind, is far more than a modish buzzword for the British designer Grace Wales Bonner, whose award-winning work has consistently mined the tensions inherent in racial, cultural and sexual intersection. In Ms. Wales Bonner’s collection, which drew on her experience of being mixed race and of Afro-Caribbean ancestry, there were suggestions of a wardrobe for a return to a somewhat remote space: the office. In particular, a zip-front denim jacket paired with wide-leg cuffed trousers presented a plausible solution to a work uniform. Though the Wales Bonner digital show was presented on both women and men, little about it suggested much need to delineate a difference. Anyone could wear it, and that includes the skirts.

When we look back on this strange liminal period — not yet over the threshold of a pandemic — two designers will likely stand above the rest for pure ornery individuality. One is Rick Owens, who, seated on some steps inside the Palais de Tokyo last week, made the following pronouncement: “Men are pigs.”

His show, titled “Strobe,” was inspired by the designer’s recent trip to Egypt and featured models wearing hieratic headpieces that were a cross between a Dan Flavin sculpture and a display panel at Just Bulbs. In many ways the collection was transparently commercial. (For all his runway antics, Mr. Owens is a shrewd merchant with a robust business in innocuous knitwear.) Balancing the linked-metal and torso-baring overshirt modeled by Mr. Owens’s friend Tyrone Dylan were plenty of shearlings and puffers. Some featured Ming the Merciless shoulders inspired by Golden Age Hollywood as filtered through the sensibilities of the 1970s designer Larry LeGaspi. Some had zipped-up executioner hoods.

What is unmistakably cool about Mr. Owens is how insistently he carves out his own distinct aesthetic space. The self-described “flamboyant small-town sissy” from Bakersfield, Calif., has taken outsiderness and driven it into the middle of the mainstream. Although speaking about this specific collection, he might as easily have been stating a credo when he remarked backstage, “I’ve decided to go directly into the Id.”

Likewise, Jonathan Anderson at Loewe has no problem facing off with the dominant culture. In this case it was the vaporous butch futurism of the “metaverse,” which he vamped with a craftsy collection based on technology that was itself once considered world-changing: fiber-optics.

Mr. Anderson sent models out from a forest of colored ribbons clad in sparkly bodysuits and sweaters illuminated from beneath with skeins of LED lights. As a funky counterbalance, he showed rubbery translucent flasher raincoats worn over what looked to be Y-fronts; shearling coats with innards exposed; and T-shirts, their fronts printed with faces, pulled up over models’ heads — a pretty direct quotation of those created by Matthias Vriens a decade ago for his label BL33N and sold at Colette.

As would also be true a day later at Nigo’s debut as the new creative director at Kenzo — a joyous presentation of blanket fringed coats, pillowy newsboy caps and Pop graphics drawn from house archives — the optimistic spirit prevailing at Loewe was like fashion Xanax, a fast-acting mood elevator everyone could use right about now.