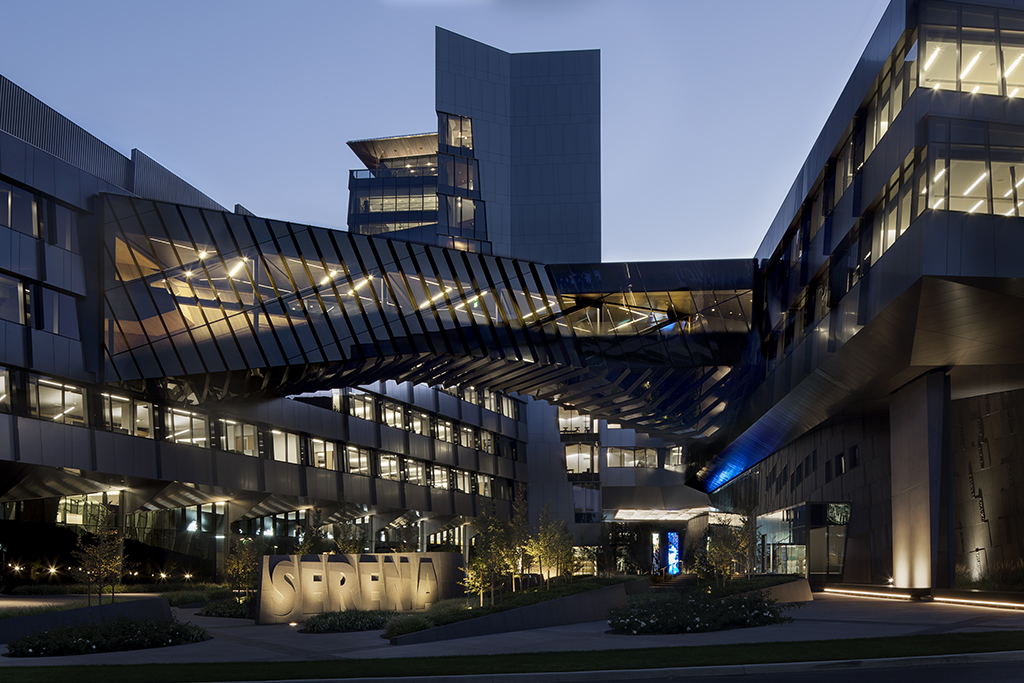 Throughout its 50 years, Nike has tapped the world’s best athletes to wear the Swoosh, and a chosen few have buildings named after them at the athletic giant’s headquarters in Beaverton, Ore. Serena Williams is the latest titan of sport with a facility bearing her name.

However, her influence on the facility goes well beyond her name on the facade.

Addressing media last week during a walkthrough of the Serena Williams Building, which was designed by Portland architecture firm Skylab Architecture, longtime Nike exec John Hoke explained the athlete’s influence on the facility. The chief design officer referred to Williams as “the spine of the project.”

“[The Serena Williams Building] is a catalyst for collaboration and creativity, and it’s in many ways a tribute to Serena Williams — her push as an artist, as an advocate, as an athlete. This is the embodiment of her,” Hoke said.

“Throughout the building, there are these little discoveries that are a part of the design process that [Skylab Architecture principal] Jeff [Kovel] and our team did as a way to remind us of the journey of Serena Williams, and frankly, her impact on the world of sports. Obviously, the greatest tennis player, but a change agent in sports and culture and beyond. This building is a vessel that embodies her full spirit,” Hoke said.

The Serena Williams Building reveal comes six months after Nike revealed another massive investment it made to its campus, the LeBron James Innovation Center, which was described as a place “where listening to the voice of the athlete is made tangible.” Hoke described the Serena Williams Building as a bookend to the LeBron James Innovation Center.

“It’s two massive investments of energy and infrastructure to double-down on what we do at Nike,” Hoke said. “LeBron James [building] is basically the innovation center. It’s the research and science center, best in the world in the sports industry — I like to call it the temple of innovation. This [Serena Williams Building] is about product creation, it’s about creativity, it’s the temple of imagination.

The new Serena building spans 1 million square feet at the Nike World Headquarters, which the company explained is equivalent to three Portland, Ore. city blocks and 140 full-sized tennis courts. Inside the facility is 200,000 square feet of lab space, which Nike said will allow its teams to test new ideas in developing, presenting and merchandising product. It is divided into three wings — Phenom, Warrior and Muse — that are connected by a main tower, which is reminiscent of a branch form that abstracts the wing of the Nike Goddess.

Chuck Eichten, a 26-year Nike veteran who is now its brand design director of workplace design and connectivity Americas, explained the challenges the company tasked Skylab Architecture with solving.

“The biggest challenge was we needed to pull people together. The teams that work together, that need to see each other’s work, that need to talk about the work, how do we get those people sitting closer together, moving within the spaces together? And how do we make it big enough to accommodate all those people, and yet, make it open and inviting?” Eichten told FN. “We had been so spread out. Now, there’s a home, a place for people to come together.”

There’s also a bit of Nike’s 50-year history infused in the building itself. To come up with its design, Skylab Architecture collaborated with former CEO Mark Parker, who is the current executive chairman of Nike Inc.

The first two levels are for Consumer Labs, which aim to accelerate and enable the company’s Consumer Direct Acceleration strategy. To facilitate this, Nike dedicated 140,000 square feet of showrooms and working space. Specifically on the second level, Nike added Immersive Rooms, or workspaces featuring  with 180-degree wraparound visual projection onto three walls that are up to 64 feet wide and 15 feet tall with theatre-quality sound. The addition of these rooms, according to Nike, will help the company visualize information in new ways, bring product to life on a much larger scale and spark innovative ways of working.

“It gets us closer to understanding the consumer and understanding what’s the product that we want to put into the marketplace. It just allows us to iterate, practice, experiment, try new things on a big scale. We’ve never been able to do that under one roof before,” Eichten told FN.

From there, Nike added a Footwear Materials Library on the third level, which is the home to its collection of current and past footwear sample materials, and a Color Lab on the fourth level that has current and past Nike colors and palettes, as well as external color libraries.

The ninth level is the home to the Phenom banquet hall, a place for special events and large gatherings, and the 10th is the Wimbledon restaurant, which Nike said has the tallest observation deck in Washington County, Ore. Also, on the second through sixth levels, Nike added wellness rooms to support mental health, meditation, prayer and general well-being, Mother’s Rooms on the third through fifth levels to support new and nursing mothers and all-gender restrooms are included throughout the building.

Williams’ inspiration can be seen on the fifth level, dubbed Queen’s Court, which serves as a space for meetings, and then again on the two-story Olympia Theater that consumes the seventh and eighth levels, which is named after her daughter. The theater seats roughly 140 guests (numbered using rose-shaped emblems, the athlete’s favorite flower) and black seating except for one, No. 72, which is orange and different as a nod to Nike’s start.

Lastly, Nike built the East Compton Hills Country Club Tennis Court outside of the building, which the company said is a nod to an ongoing joke with Williams’ family, and the lobby closest to the court features the iconic shopping cart, which is how her family used to carry tennis balls. Also, neon wings surround the phrase “I’m Gonna Learn How to Fly” above the shopping cart, which Nike said is an homage to the tennis icon’s childhood.

Addressing media during a tour of the facility last week, Hoke said the building will allow for 1,000 designers to fit on the fourth floor, which is something that has never happened during his three decades with the Swoosh.

“What is remarkable is that we have not had the concentration of 1,000 creatives in any one building in nearly 30 years,” Hoke said in the Olympia Theater during a tour of the building last week. “I’m turning 30 [at Nike] this year and I’m old enough to remember in the Michael Jordan Building, you could sit all the designers on one floor — and at that time it was probably 100. To think about 1,000 creative minds, diverse in discipline, background, ethnicity, focus, it’s going to be amazing.”

With this wealth of talent, Hoke said he’s confident Nike can problem solve better than ever before, which will be achieved via collaboration.

“With 1,000 designers, what we’ve come to learn is that no one particular designer can solve all the problems. The problems are too big at this point, they’re too rich,” Hoke said. “We demand collaboration because it helps us get to group genius where exploring different ways of thinking, pressure-testing our thinking, being restlessly curious about what’s out there, some of the existing theories that we don’t believe in, some of the boundaries that we don’t believe in. It takes collaboration to get that to come to life.”

Hoke — who described the building as “porous” with “lots of penetration between floors” — said it also allows for there to be a series of neighborhoods inside.

“There’s an interesting interior urbanism across all the different parts of the building, so the neighborhoods get to be a neighborhood, get to have a culture and an audience and a community all on the same floor,” Hoke said.

Nike has long publicized its sustainability mission, making a stronger emphasis on being eco-friendly in recent years, and the creation of the Serena Williams Building is yet another milestone moment.

By the numbers, the building — which is LEED platinum-certified — features 648 solar panels and more than 20% of the materials are made of recycled content and harvested and manufactured regionally. Also, more than 50% of the wood is Forest Stewardship Council-certified and derived from sustainably managed forests and there is an energy cost savings of more than 41% compared to a baseline building.

What’s more, Nike explained how the Serena Williams Building landscape impacts its sustainable efforts. For example, the facility is part of what Nike calls its salmon-safe campus, with stormwater run-off and source pollution reduced to protect Pacific Northwest salmon watersheds. Also, Nike said it supplemented the federally-protected wetland that runs through the campus and along the building with thousands of native plant species, rainwater is captured and used for the building’s toilets and fresh air is supplemented by the building indoors to facilitate increased productivity.

Nike used its global reach for the decor and visual highlights in the Serena Williams Building.

This includes the art of several notable women artists.

For example, Gemma O’Brien, an Australian typographic artist by way of Portland, created the painting on the third level. The painting, Nike explained, is inspired by the motivational phrases hung throughout the house by Williams’ father, Richard Williams, as encouragement for her and her sister, Venus Williams, to write down their own goals. And the multistory SinewFlex sculpture on the fourth and fifth levels was designed by artist, architect and Cornell University professor Jenny Sabin of New York-based Jenny Sabin Studio.

Outside of the facility, Nike added pulsation sculptures by Madrid-born installation artist Daniel Canogar, featuring abstract digital motion graphics on four LED towers that the company said captures “the dynamic and versatile energy of Serena.” Also, white roses are featured as visitors approach, a nod to the bouquet given to Wimbledon winners

Tapping into the company’s heritage is the Shoe Dog Bridge, which is an homage to Nike co-founder and chairman emeritus Phil Knight. Nike said it is the company’s first covered footbridge and features nods to Knight’s life in Oregon and abroad, including the covered bridges in the city of Roseburg, the cantilever of the old Hayward Field at The University of Oregon and Japan and the movement and structure of origami.

Further making the decor personal to Williams, Nike added memorabilia cases on the first level with pieces from all 23 of Williams’ major wins that are grouped by the four Grand Slam tournaments. Also, an installation on the first level features neon text that reads “Ride a little, bump a little,” which is a nod to a time before her sister could legally drive when she drove the family van and ran into several parked cars (which are represented by side mirrors on this installation represent the damage done to those cars.

Further storytelling is done via the first-level’s US Open Café Nook, which looks like a luxury apartment in NYC showcasing important people and moments in her life, the third-level Oz Café ceiling graphic with constellations from the night sky in Melbourne featuring images of Nike athletes including Williams and Michael Jordan, and the 10th-level rose mosaic in the Wimbledon Restaurant that is a nod to both Williams and Wimbledon.