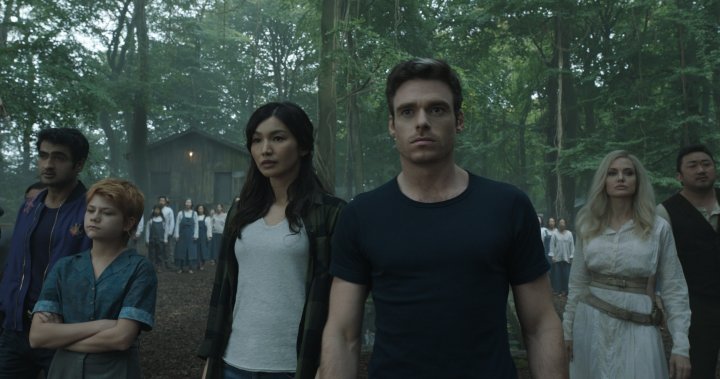 There’s a lot going on in Eternals.

The core group of superheroes in the movie, the Eternals themselves, includes 10 people. We travel from ancient Babylon in the 6th century B.C. to 1945 Hiroshima to present day, and that’s not even including the stops in-between, which are numerous. There are so many tendrils and strands interwoven through time, it’s a wonder that Oscar-winning director and writer Chloe Zhao (Nomadland) could keep it all straight. It’s an arduous task for the viewer, as well.

Trying to summarize the story in a brief fashion is near impossible, but here goes: the Eternals, led by Ajak (Salma Hayek), were sent to Earth thousands of years ago — before human civilization as we know it even began — in order to protect human life from Deviants, a strong monster-beast type creature, and to ensure their survival through time.

Who’s the most interesting to watch out of all these superheroes?

Of all, Sersi and Ikaris get the most time as they grapple with their past thousands-of-years-long relationship. They also butt heads about humanity and the worthiness of our species: do we, as a collective, deserve to survive? It’s one of many questions asked in the film, and when thrown in the mix with all the complexity, gets the same surface-level answer.

Each of the superheroes has their own storyline, and again, most get short shrift due to the sheer number of characters. There is a ton of exposition simply because there’s not enough time to show the individual stories — ironic, considering the movie’s title.

What about the others?

The other superheroes are certainly diverse, which is a nice change from the (usually) mostly straight white teams we’ve seen in the past. It’s probably the most refreshing element of the film. Henry portrays a Black gay superhero, an absolutely unheard-of thing in superhero movies thus far. Even though it’s 2021, the tittering from the audience at my particular screening whenever he was onscreen with his husband means we still have a long way to go. Including characters like this, or the deaf superhero Makkari, is really the only way to move forward.

Nanjiani is easily the funniest character, bringing much-needed levity and humour to the proceedings, which otherwise are like a grey, solemn procession. Jolie as Thena has to be the strangest casting, as she floats through the movie without really doing or saying much at all, but is somehow given a major role towards the end. It’s hard to establish a connection with most of the characters, so when an emotional scene takes place, they haven’t really earned our compassion or empathy. It’s as if we’re just supposed to “know” these superheroes right away.

What do you mean by ‘grey, solemn procession’?

Eternals, at times, feels like the textbook version of a superhero story. We’re constantly jumping between times and civilizations, between 10 different characters’ backstories and struggles, and it’s spread so thin with umpteen explanations of why things are the way they are, it’s almost like work to keep it all straight.

(Game of Thrones fans, however, will get a thrill when Madden and Harington interact in one scene. When they say “Sersi” it’s sounds exactly like Cersei.)

Despite the varied geographical locations, it somehow still comes off as bland, with many scenes taking place on a nondescript shoreline or a wide, featureless field. Fight scenes, for the most part, are engaging and fun to watch, but for my dollar, too scant. This movie needs far more action and far less dialogue, but then, how will the dense plot be explained? It’s a conundrum.

So what’s the bottom line?

Clocking in at 2.5 hours, Eternals is an exposition-heavy superhero movie, and while it pushes forward in terms of diversity in the Marvel universe, it’s probably one of the more dull superhero movies of the recent past. With too many characters and too many stories to tell, it’s tough to give the proper amount of attention to any of it.

‘Eternals’ is now playing in theatres across Canada. Please check your local listings for details.