Meghan Markle sported a £3,200 Valentino white suit as she stepped out at the Invictus Games in The Hague today.

The Duchess of Sussex, 40, may have been inspired by a look recently worn by her sister-in-law Kate Middleton, who opted for an all white suit on a tour of the Caribbean last month.

She daringly opted not wear a top underneath.

Playing it more safe, Kate last month opted for a £1,370 fresh white jacket with matching £575 trousers from Alexander McQueen which she paired with a bright orange shirt during a meeting with the Prime Minster of Jamaica.

Showing off her penchant for co-ordination, Meghan added gold embellishments to the clean cut look.

Going to Valentino all round, she wore a £2,200 off-white bag from the Italian designer. She also accessorised with a golden ‘Love pendant’ by designer Sophie Lis, which refers to a French poem about enduring and growing love.

The necklace, first worn by Meghan in 2020, is made by designer Sophie Lis, carries the engraving ‘Qu’hier’ after a diamond encrusted plus sign, and ‘Que Demain’ followed by a ruby minus sign.

The Duchess of Sussex , 40, may have been inspired by a look recently worn by her sister-in-law Kate Middleton, who also opted for an all white suit on a recent tour of the Caribbean.

Waving the white flag! The Duchess looked elegant in the monochrome number while Prince Harry opted for a classic suit 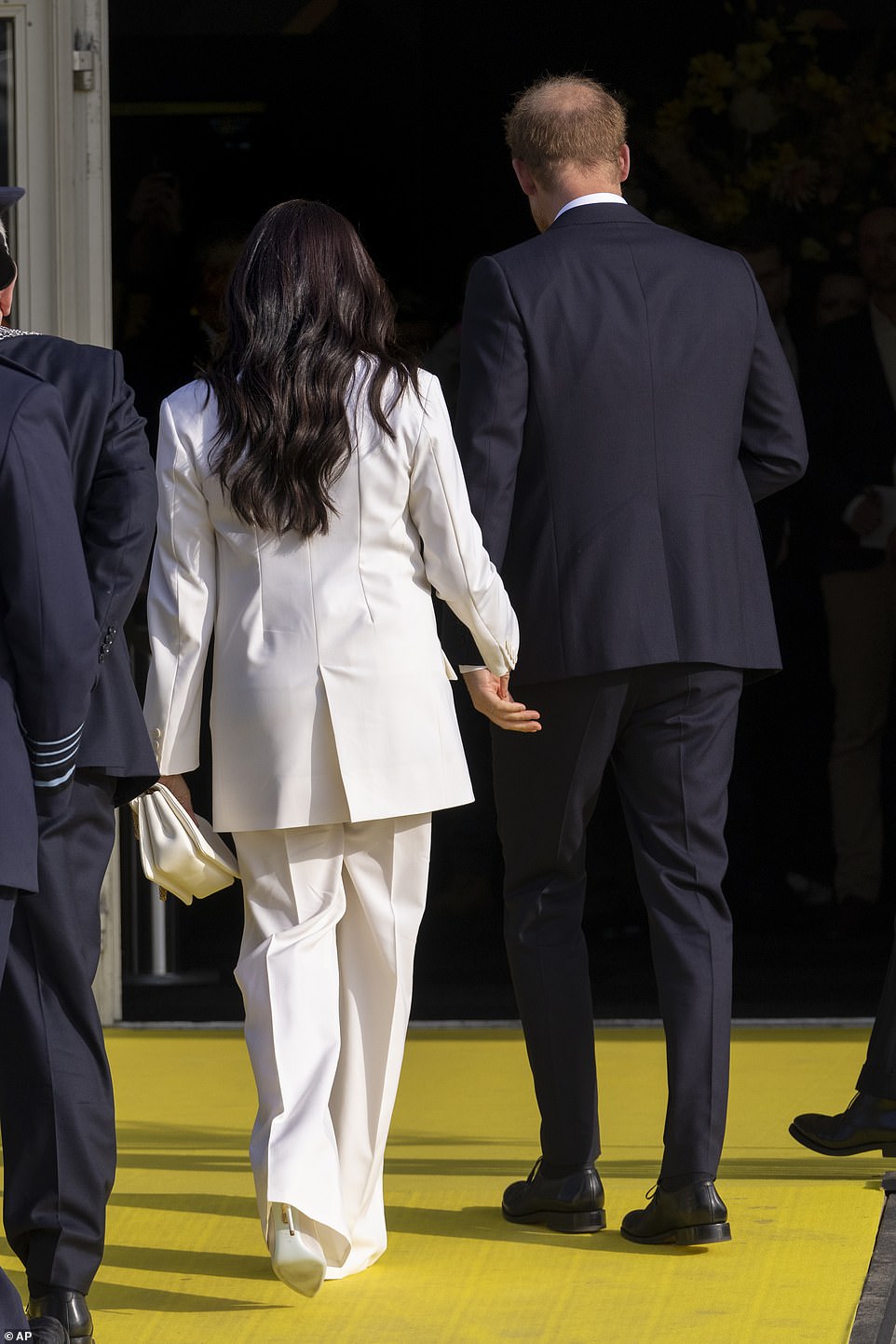 Bit of all white! Meghan looked stunning from all angles as she walked hand in hand with Prince Harry into the stadium 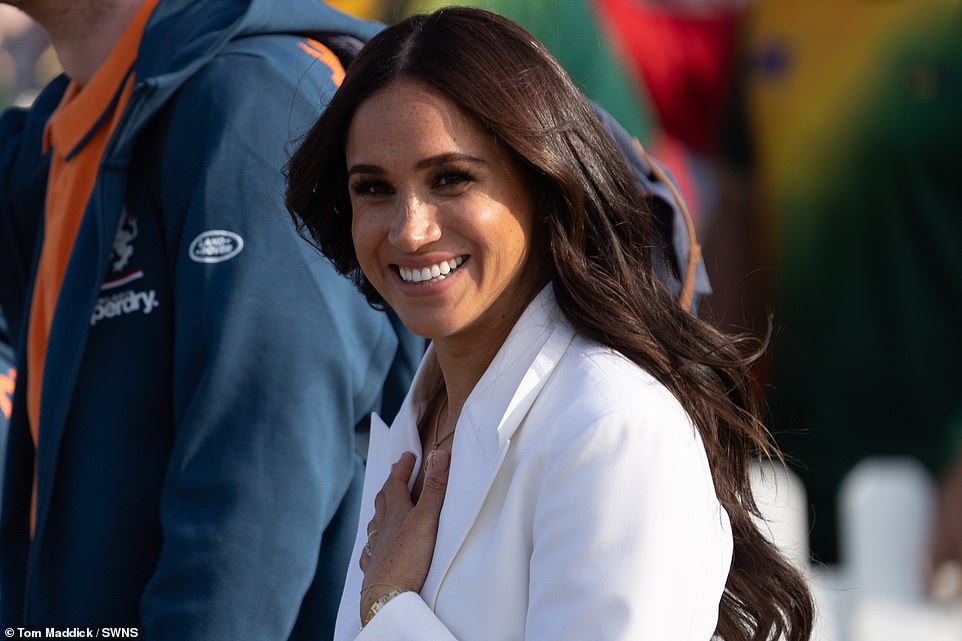 Back in action! Meghan looked radiant in the double-breasted jacket which she sported in the sunshine of the Netherlands 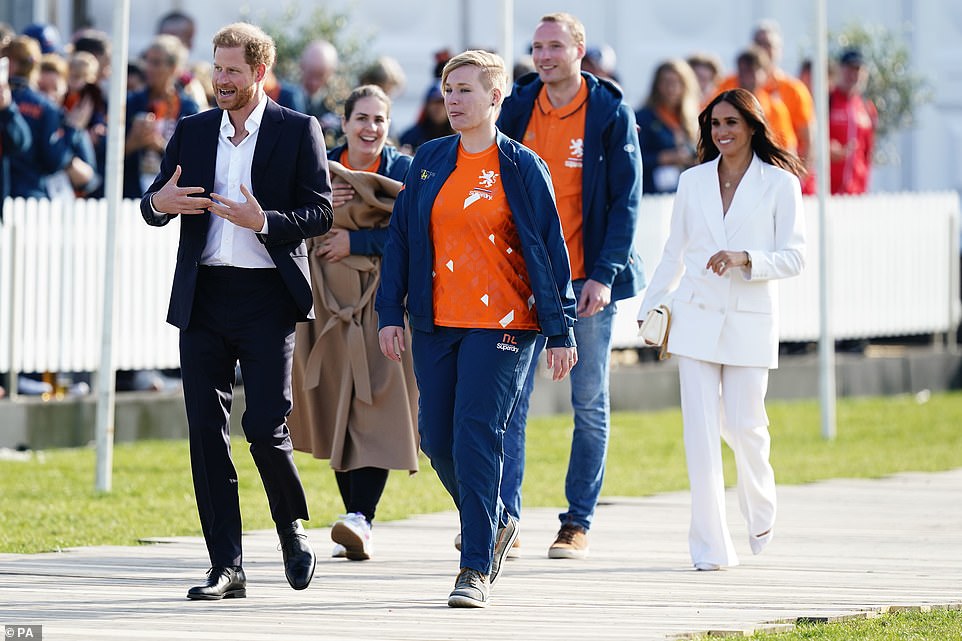 Meghan, who was earlier sporting a camel coat, appeared to hand it off to an aide as she travelled through the stadium

The reference is an an ode from the 19th century French poet Rosemonde Gérard which translates to: ‘Every day I love you more, more than yesterday less than tomorrow.’

Adding an edge to the look, she also opted for a golden chain around her hand.

She completed the look with a pair of towering heels from Aquazzura, which she first wore to her wedding in 2018.

Earlier today, she was seen in a tobacco-coloured cashmere Max Mara coat worth £3080 Max Mara which she previously sported the coat during a trip to New York in September.

In a sweet moment, she handed it off to a Team Netherlands competitors – one of whom was was carrying a newborn. Meghan handed over her coat to the new mum to help keep the baby warm.

Sporting a natural make-up look, Meghan let her hair flow down in loose waves, and opted diamond earrings, which she wore to her wedding,  and Princess Diana’s Cartier watch.

The elegant timepiece was worn by Diana at a number of occasions, including a 1997 visit to London’s Shri Swaminarayan Mandir Hindu Temple and an engagement at the British Lung Foundation that same year. 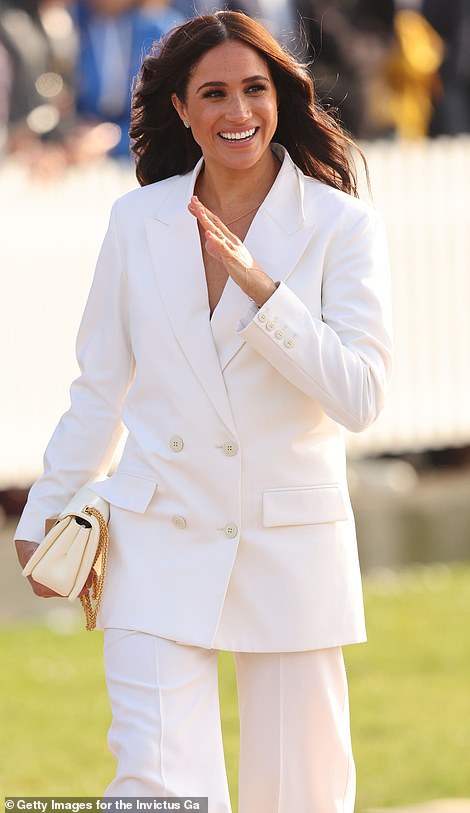 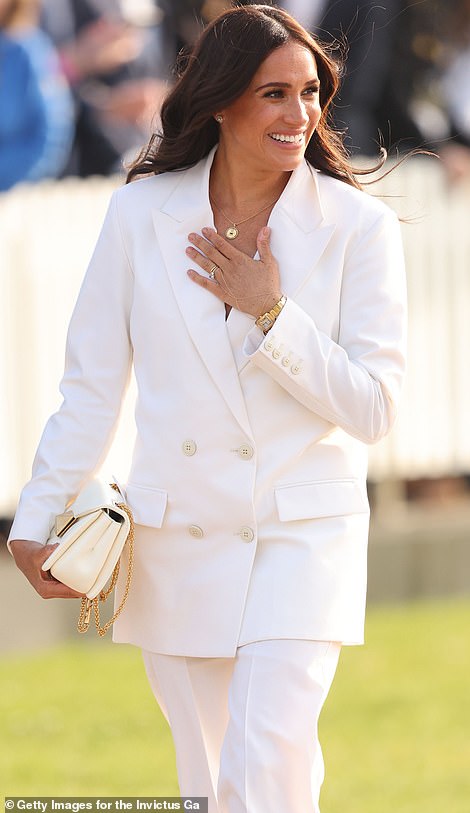 Showing off her penchant for co-ordination, the royal matched her gold chain on her bag to a trendy golden chain around wrist and a never-before-seen necklace, she added an off-white bag and golden chain and towering heels 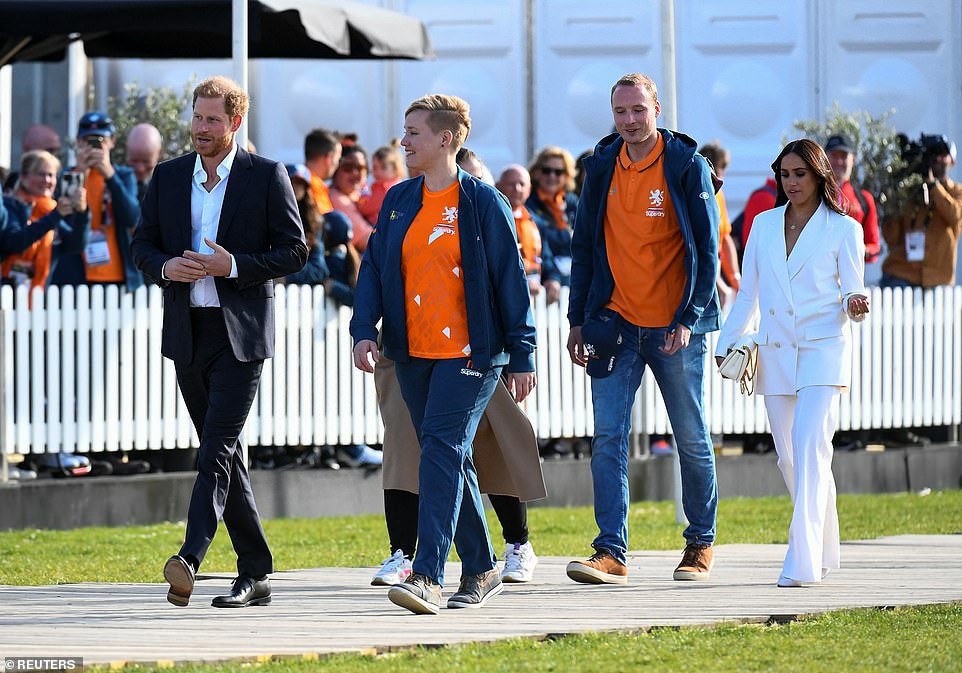 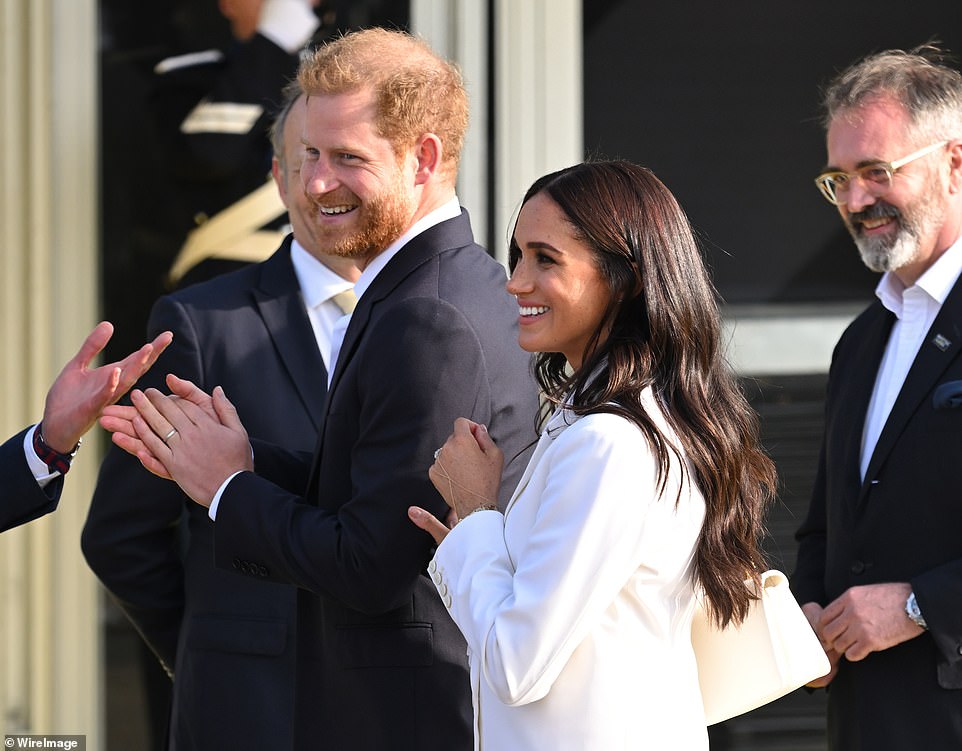 Prince Harry, Duke of Sussex and Meghan, Duchess of Sussex attend the Invictus Games Friends and Family reception at Zuiderpark

Meghan is known to be a fan of the Tank watch and splurged on her own two-tone version back in 2015 when ‘Suits’ was picked up for a third season.

Earlier, the couple chatted to the Ukrainian team ahead of the games kicking off – with their Netflix film crew in tow.

Meanwhile, Harry dressed in a smart navy blue suit was be seen holding a calendar looking earnest, as Meghan is further back smiling at another member of the group.

Meghan opted for a light smokey eye look with a touch of foundation and gentle pale nude lip.

The camel coat is a staple of Meghan’s wardrobe, with the Duchess showing off a sizeable range  which cover a range of materials to be worn rain or shine.

Meghan is a fan of the long brown coat and has previously worn the Max Mara camel coat in New York.

Netflix are filming Harry’s documentary Heart of Invictus about the Paralympic-style games.

Critics have accused the royal couple of ‘cashing in’ on the Games by allowing the streaming giant, with whom they have signed a $100million deal, into private meetings.

It came hours after footage has emerged of a blacked-out van and 4×4 leaving Windsor Castle on the same day Harry and Meghan snuck in for an incognito visit – sparking speculation they were on board.

The convoy travelled down Windsor High Street yesterday preceded by two police motorcyclists, in what could be the couple’s security escort.

Going to Valentino all round, she wore a £2,200 off-white bag from the Italian designer. She also accessorised with never-before-seen golden necklace and a golden chain around her hand 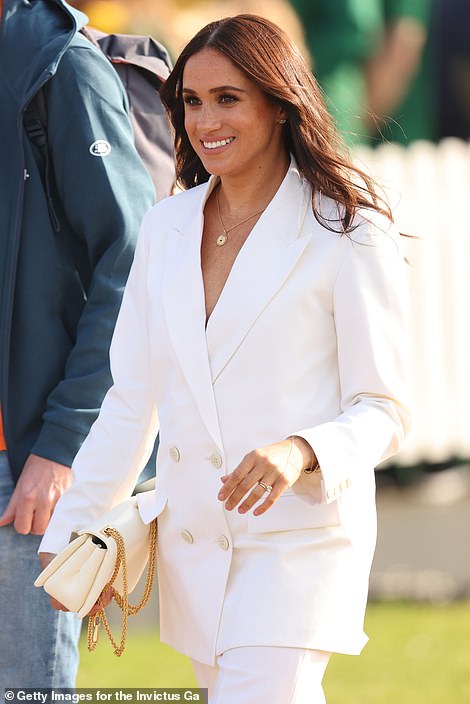 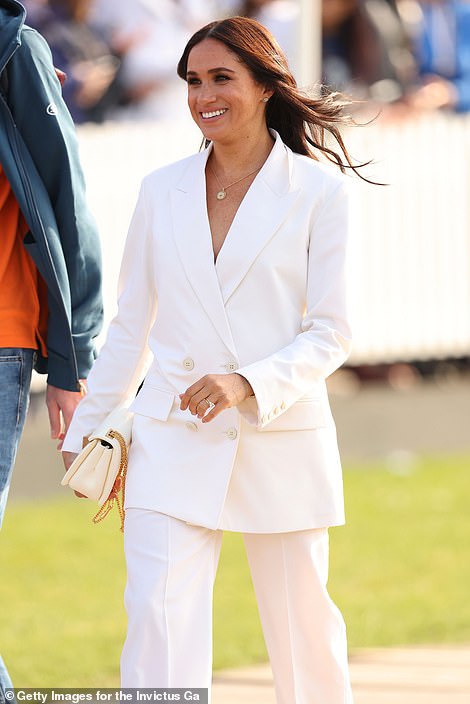 Meghan, Duchess of Sussex attends a reception ahead of the start of the Invictus Games The Hague 2020 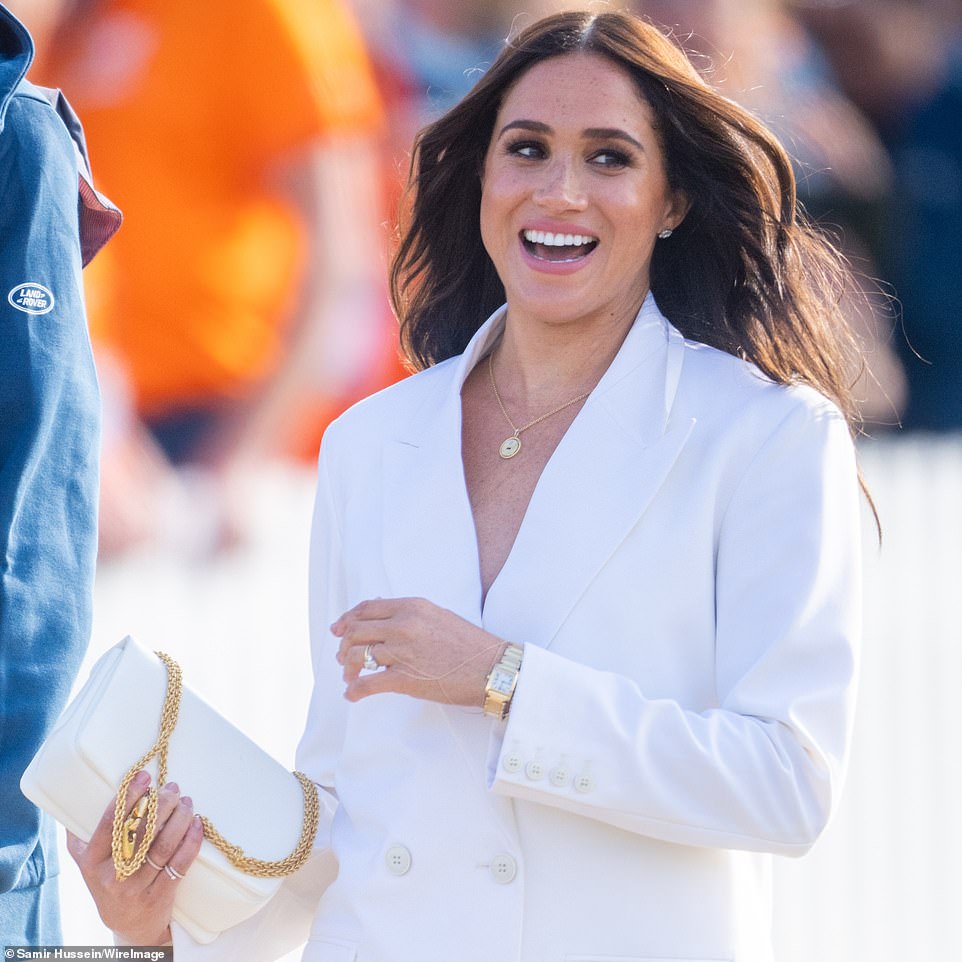 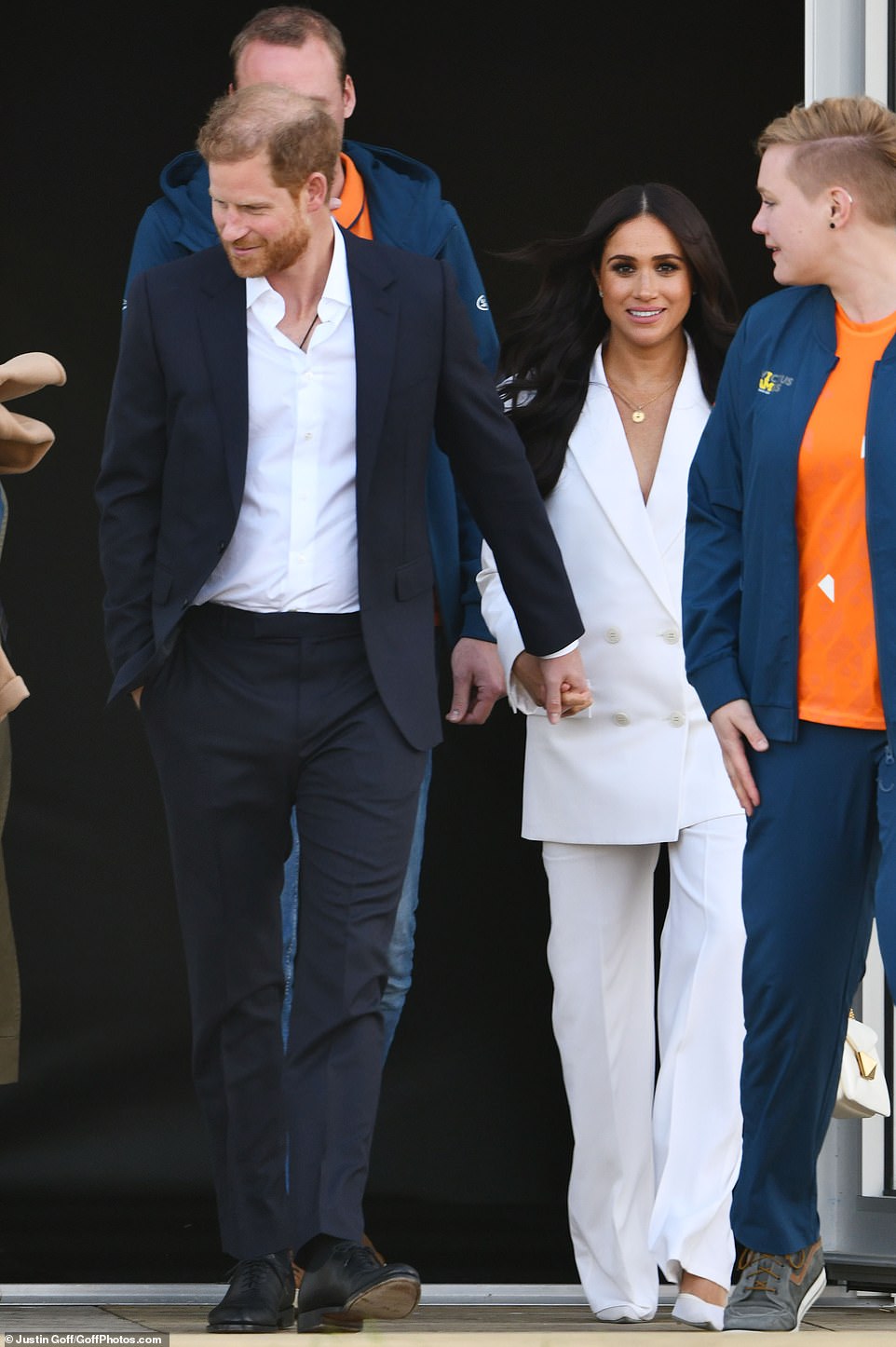 Holding hands: Harry held his wife’s hand and led her into The Hague today as she stunned in a white Valentino suit

Reigning high in the style stakes! Meghan looked effortlessly cool in the white suit as she joined Prince Harry at The Hague 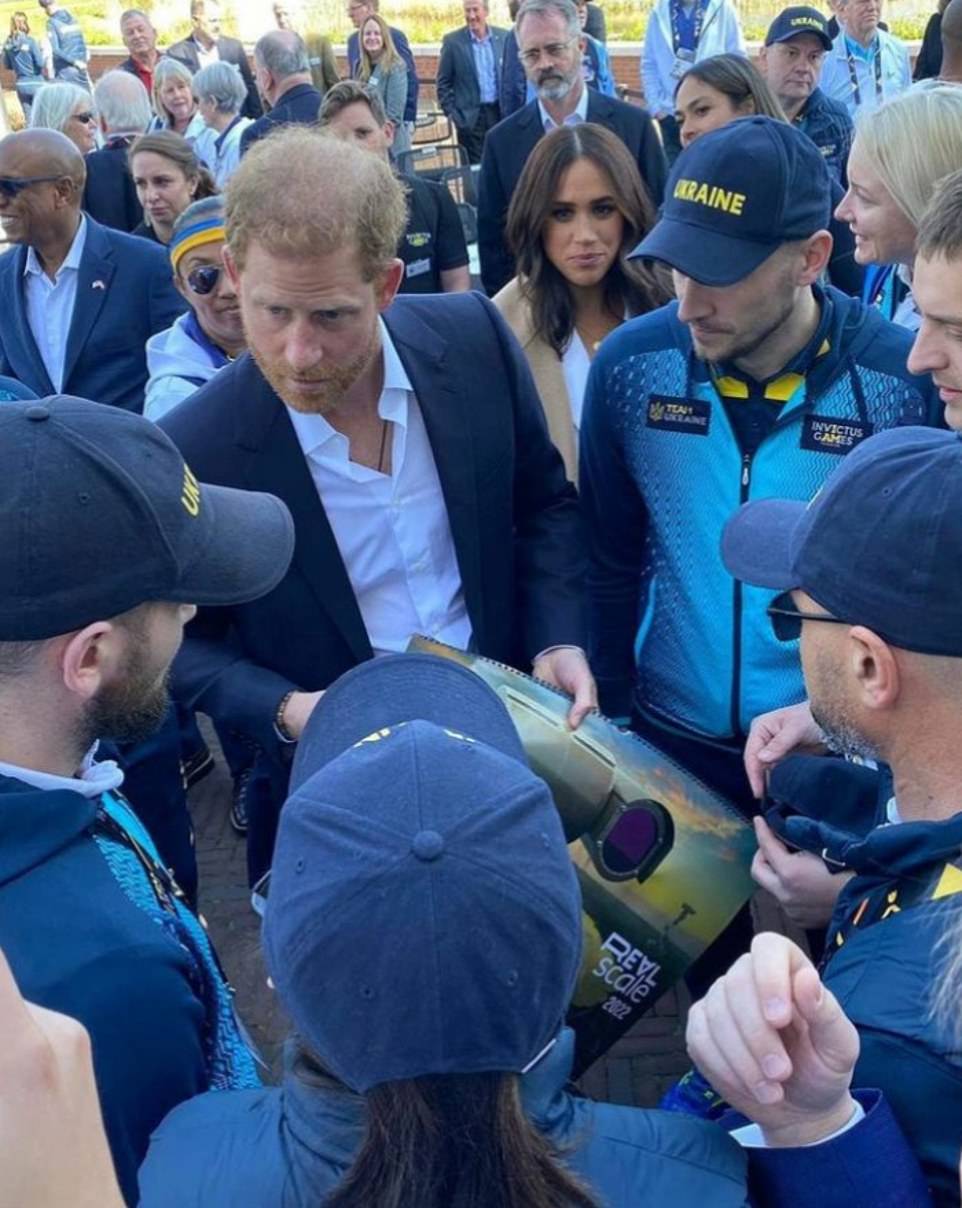 Earlier today, she was seen in a tobacco-coloured cashmere Max Mara coat worth £3080 Max Mara which she previously sported the coat during a trip to New York in September. 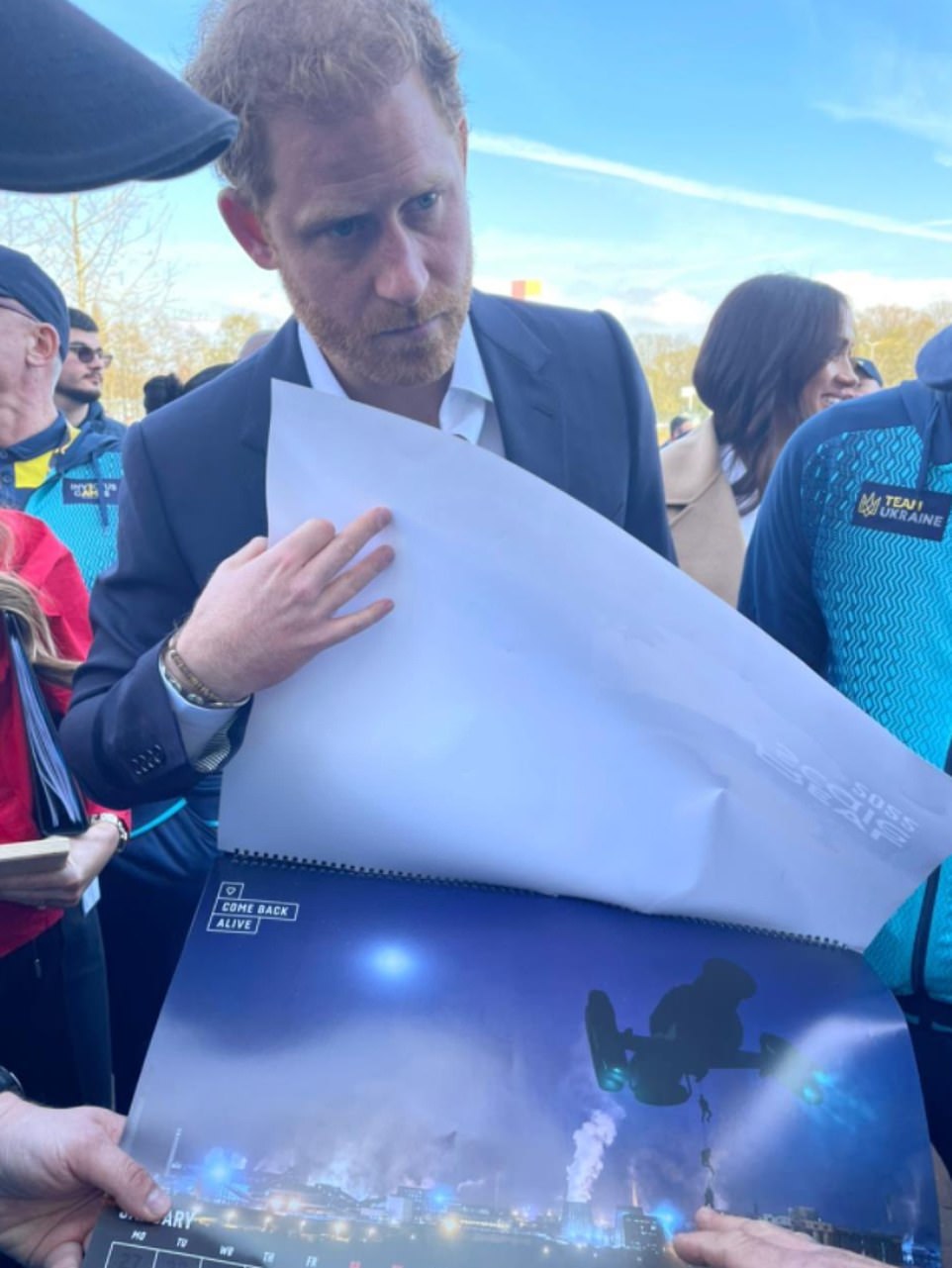 Earlier, the couple chatted to the Ukrainian team ahead of the games kicking off – with their Netflix film crew in tow.

The video may spark questions about their security arrangements, given Harry had previously suggested he would not return to the UK unless he was given full police protection.

Harry and Meghan’s trip comes after they held top-secret ‘clear the air’ talks with the Queen and Prince Charles at Windsor Castle on Thursday after stopping off in the UK en route to the Invictus Games in The Netherlands.

It is the first time the Duchess of Sussex has set foot in Britain since she and Harry acrimoniously quit as working royals and left the royal family reeling with their score-settling Oprah interview in which they accused an unnamed senior royal of racism.

Meghan last saw the Queen at an awkward Commonwealth Day service on March 8 2020 but has claimed since to regularly speak to her on the phone and over video calls.

Meanwhile Harry has not seen his grandmother in person since Prince Philip’s funeral last April when he flew over briefly from their new home in the US. But their contact would have been limited because of Covid restrictions.

He has since launched a High Court legal action against the Home Office claiming it is too dangerous to bring his family to the UK after being stripped of his official Metropolitan Police protection.

It is not known how the couple arrived – whether they took a private jet or flew in commercially – but their presence is the talk of locals on the Windsor estate, the Mail understands.

They arrived incognito on Wednesday and are believed to have stayed at Frogmore Cottage, the home they have kept on despite quitting the UK where Princess Eugenie and her family currently live, overnight.

They are not believed to have their children, Archie and Lilibet with them, the latter of whom the Queen has never met.