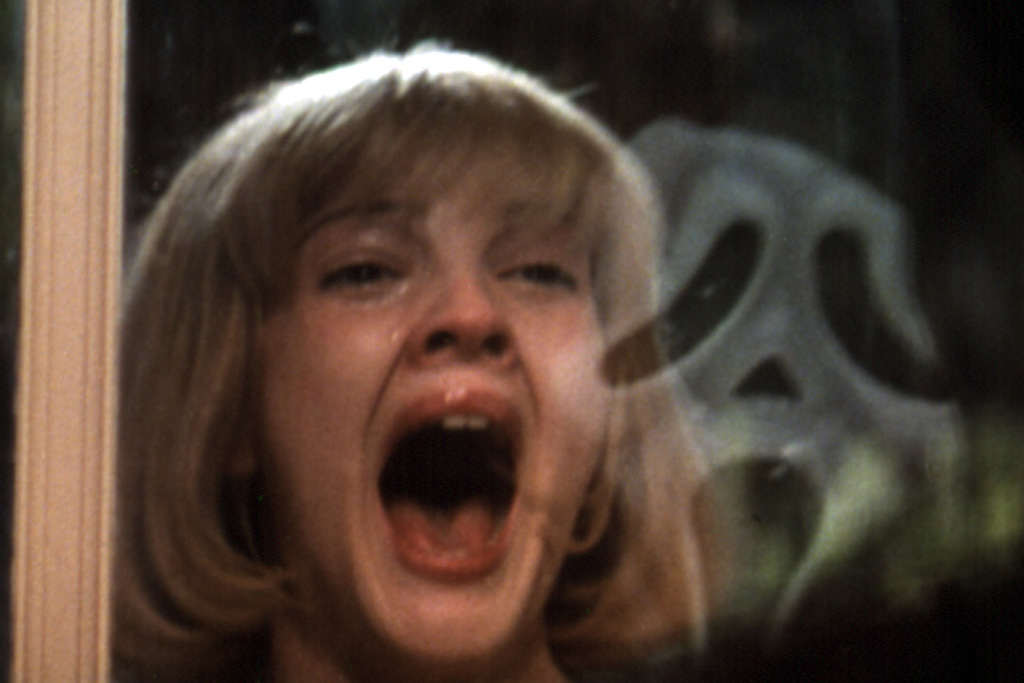 It’s the line in the 1996 Wes Craven horror film “Scream” that should immediately trigger the iconic image of Drew Barrymore in a short blond wig. For horror-genre fans, the opening scene of “Scream” was a masterclass in film-making when (spoiler alert) the star gets killed off in the first fifteen minutes. It was Barrymore’s idea, too. (She was a silent producer.)

Barrymore — who was originally attached to play Sidney Prescott — wanted the role of Casey, the high school teen who gets brutally murdered after a back-and-forth, horror-movie trivia game over the phone with the killer. “I thought what if I die? It’ll be like all bets are off, anybody could get killed in this movie,” the actress said in a recent segment during “The Drew Barrymore Show.” “I thought this was the best way that I could serve this movie and this script that I so believed in.”

Twenty-five years later and her costume from the movie stills holds up, with fans recreating the look for Halloween to this day.

Here, FN caught up with costume designer Cynthia Bergstrom to recount how the ensemble came together.

Drew Barrymore as Casey has become so iconic, what was that collaboration like with Drew?

Cynthia Bergstrom: “Drew and I have worked together before on a movie when I think she was about 15 and it was called ‘No Place to Hide.’ In this movie, both she and I wanted the character dressed differently from how the director wanted her dress. He also wrote the script and was really insistent on putting her in this completely over-the-top Xanadu-type outfit. Even though I designed it and brought all the elements together, it was really outlandish. So when we first spoke on the phone about ‘Scream,’ she spoke about that and she said, ‘Can we just not do an outfit like that?’ And I said, ‘Absolutely. This character is a high school student cooking popcorn, getting ready to watch a video with her football jock boyfriend. There’s no way I’m going to put you in anything outlandish like that.’”

How did the look come together?

CB: “We tried on a lot of different options and we had the fitting at Wes Craven’s house. He was there, one of the producers was there and I was there with my assistant. It was just a really great experience. We knew that we needed the sweater to tell a story, but not tell a story at the same time. And so it was just a simple linen blend from J. Crew. We definitely wanted the sweater to be light in color so it would show blood. When Drew put that sweater on, I remember that she loved the sleeves. The sleeves were long and they came down, covering a portion of her hand and just sort of let the fingers be seen.”

And what was significant about the lavender pants?

CB: “I love to throw in lilac and lavender to represent love, so anywhere in my work where you see me doing purple there’s usually some sort of love-nuance thing happening. So her pants were by British designer Katharine Hamnett. She was really popular at the time and they came from Fred Segal in Santa Monica. She was also barefoot in the scene.”

Do you have any on-set memories from shooting that specific opening scene?

CB: “Yes, we were shooting at the this beautiful house in Sonoma County, and I actually grew up in Sonoma County. I hadn’t been back in years, and so it was really cool to see the place where I grew up. We were setting up for the shot and as the costume designer, I always go in when I have a new established — that means when the costume is being worn by the actor on screen for the first time. So I walked into the house, walked into the kitchen. Drew was rehearsing and I’ll never forget this… She turned and looked at me, and she smiles and winks. It just set the tone for this whole project. She was just so warm and friendly and genuine and just a chick hanging out. That was really fun.”