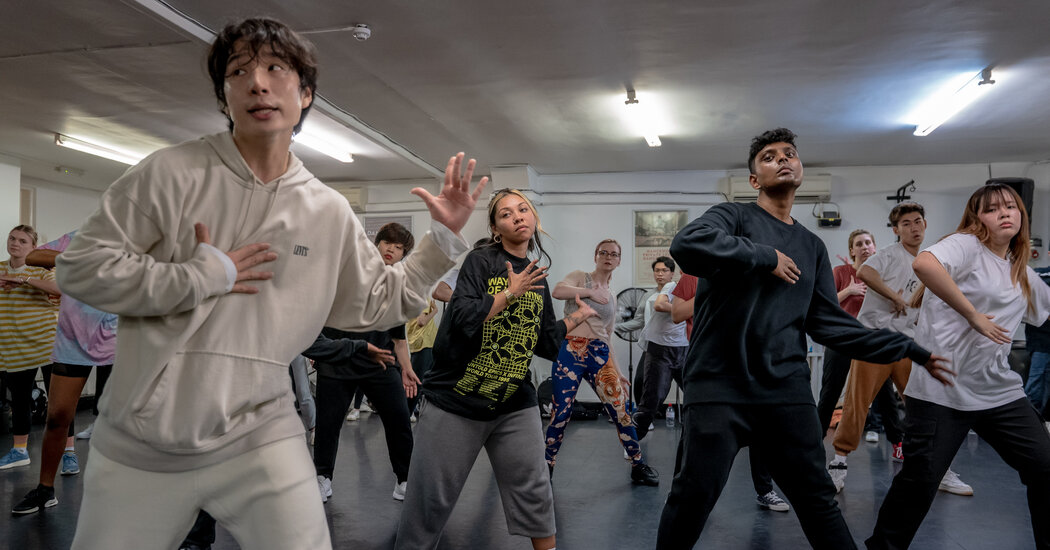 LONDON — The world has gone K-razy.

The South Korean TV series “Squid Game” has become Netflix’s most-watched show, No. 1 in 94 countries. At the 2020 Academy Awards, Bong Joon Ho’s “Parasite” was the first film not in the English language to win best picture. And in music, the K-pop band BTS has 23 Guinness World Records for most viewed, most streamed and most followed in a variety of categories (and there was that U.N. General Assembly appearance in September).

If you’ve watched K-pop music videos, you know the energetic dance moves are a big part of the attraction. Sure, the songs are melodic, the singing accomplished and the members uniformly cute, but a 2019 study of BTS’s popularity commissioned by the Korean Cultural Centre UK and conducted at the University of Liverpool found that many fans identified the precise and vigorous choreography as the band’s most appealing aspect of all.

“Almost every university has its own K-pop dance community,” said Joohyun Song, marketing manager of the Korean Cultural Centre UK, established by the South Korean government in 2008. “There are hundreds of them” in Britain, holding dance contests and festivals, she said.

Dance also is a part of the cultural center’s 10-week K-Pop Academy, a free program that twice a year introduces 30 students to Korean food, fashion, film and, of course, dance. There have been 600 graduates.

Other admirers have been teaching themselves the steps — or turning to one of the many K-pop dance classes offered from Paris to Prague and Manhattan to Mumbai. And with the holidays approaching, a gift certificate might prove to be as popular as the classes themselves.

In 2018, Minho Jung, a professional dancer from South Korea, started teaching two K-pop classes a week at Danceworks studio in London’s Mayfair neighborhood. Now he has four, and, according to Cherise Collings, one of the studio’s managers, “Minho’s classes are so popular, they sell out. There’s always a wait list.”

I decided to give it a try, so one recent Friday evening I pulled on a pair of baggy jeans, a T-shirt and rubber-sole shoes and — once at the studio, just off Oxford Street — paid £14 ($19) for a 75-minute class.

I’ve often wondered how BTS manages to execute their rapid, muscular dance routines while wearing suits, sweaters or jackets, and Min, as everyone calls him, matched the mystique: Though he wore a hoodie and sweatpants throughout the evening, he didn’t seem to break a sweat. My fellow classmates — 22 women and four men, most of whom seemed to be in their 20s and 30s — were less bundled up; my outfit seemed the norm.

Min started the class with stretches and jumping to BTS’s “Dynamite,” then began teaching us a portion of the dance routine from the video of “Eternal Sunshine,” by the eight-member male K-pop band Ateez. He started without the music, demonstrating slowly how every foot, arm and shoulder should move for one segment and then having us repeat the combinations again and again, looking at him and at ourselves in the studio’s floor-to-ceiling mirrors. With the music playing slowly, he circled the room, suggesting one student move his arm out straighter, another kick her leg a little higher. Then, as he could see the class getting comfortable, he played the song segment faster. Once the class had nailed it, he moved onto the next sequence. And the next.

By the end of an hour everyone seemed to have the hang of it, and Min broke us into groups to perform for one another, encouraged by applause, cheers and lots of laughter.

“It’s a real community,” said Rachel Richardson, one of Min’s regulars. She said she loved the class because “it’s the whole package, the music, the dancing” and the camaraderie.

Lesley Osman, Danceworks’ general manager, said that kind of response was why the studio expected to sell more holiday gift certificates to K-pop classes than any other dance genre. “There is a real sense of joy, community and shared experience in these classes which is a great antidote to the isolation of the months of lockdown,” she said.