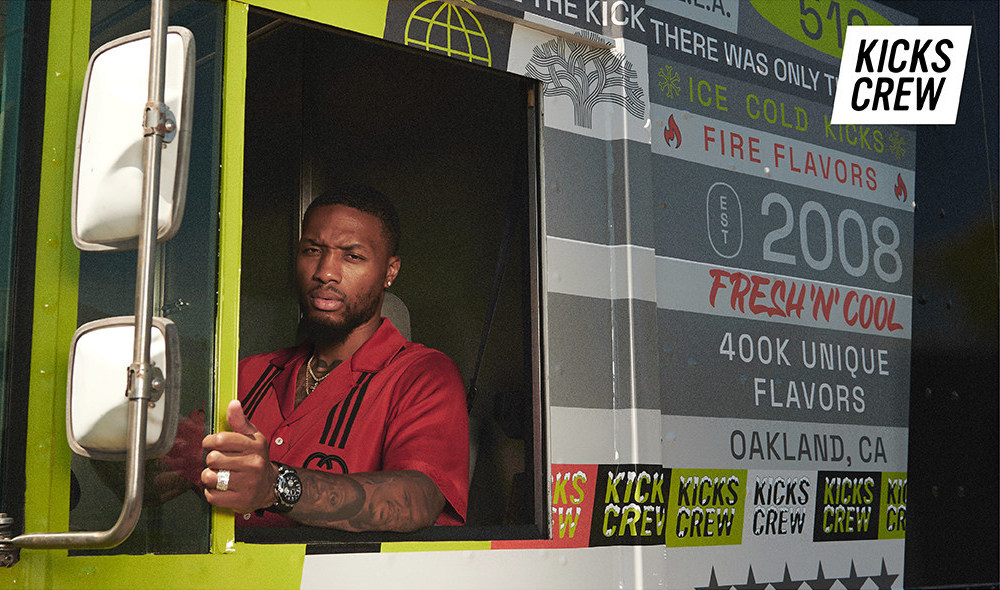 Online sneaker and apparel seller Kicks Crew has selected a new face for its burgeoning brand.

The digital marketplace, which works directly with verified retailers of the brands it carries and guarantees product authenticity for consumers, has brought on NBA All-Star Damian Lillard to be its equity investor and first Crew athlete.

The partnership launched with a campaign that documents the duo’s first community initiative in Lillard’s hometown of Oakland, Calif. The campaign is accompanied by an app experience highlighting curated sneaker edits by the Portland Trailblazers star point guard, as well as limited sneaker drops and giveaways.

“I invested in Kicks Crew because of the platform’s unique point of view on sneaker culture. Putting accessibility and community first, they’re building a space that allows everyone to experience sneaker culture,” said the Portland Trail Blazers star, who signed a 10-year, $100 million Adidas shoe deal in 2014. “They put in the work to provide an authentic and seamless experience for their Crew, and the fact that you can find so many styles at your fingertips made me want to introduce the brand to my friends and fans. I’m excited to be a part of the Crew and bring the sneaker community together.”

“Damian is an iconic athlete, having made unforgettable contributions to the sport of basketball all while staying true to his community. We’re excited to welcome him to the Crew as we build and serve our global community,” said Ross Adrian Yip, co-founder and chief operating officer of Kicks Crew. “Damian is an active investor, we’ve been bouncing off ideas around what we can do for the sneaker community. It was obvious that Damian is passionate about this space and the perfect partner for us as he embodies what our brand stands for—by staying true to ourselves and our Crew.”

The Kicks Crew X Damian Lillard visual campaign and digital experience launched exclusively on the company’s app and website on Oct. 20. As part of the campaign, Lillard drove an ice cream truck to Oakland’s Brookfield Village, bringing pairs of sneakers to people in the community.

Launched in 2021, Kicks Crew touts more than 400,000 unique styles from recent releases, to “hype kicks,” to everyday and athletic footwear across running, basketball, soccer and more. The platform also carries overstock inventory from brands like Adidas, Nike, Jordan, New Balance, Yeezy and others.

Lillard’s campaign delivers on Kicks Crew’s goal to address a gap in the current sneaker market, which often is hyper-focused on limited editions and luxury offerings, despite growing demand and a large addressable market in the general athletic footwear and apparel segment.

Essentially, Kicks Crew aims to operate a platform that doesn’t alienate customers based on product offering or price point.

And while the burgeoning resale market doesn’t appear to be slowing down any time soon, Kicks Crew wants to distance itself from the trend by avoiding secondhand selling. Everything sold on the platform comes from authorized retailers. Additionally, the app offers shoppers extras including event invites, behind-the-scenes images and chances to win merchandise.

The company currently uses RFID technology to tag each pair of sneakers with a signature zip tie in order to identify the retailer every pair came from. Looking ahead, Kicks Crew wants to incorporate more transparency to the customer by implementing blockchain technology to access the product’s order and quality control information via a QR code.

In March, the company raised a $6 million Series A round led by Gobi Partners, Pacific Century Group and Complex China, to strengthen its foothold in the U.S. The capital helped the originally Hong Kong-based startup open a U.S. headquarters in Los Angeles and grow headcount. Gross merchandise value (GMV) for the digital platform grew 15 times over in 2021 compared to 2020, and its traffic increased more than quadrupled since January 2021.

Kicks Crew distributes its products globally, but its main markets are in the U.S. Canada, Australia, Japan, Korea and Taiwan. The company wants to further expand its business to Southeast Asian markets including the Philippines, Thailand, Indonesia and Malaysia.