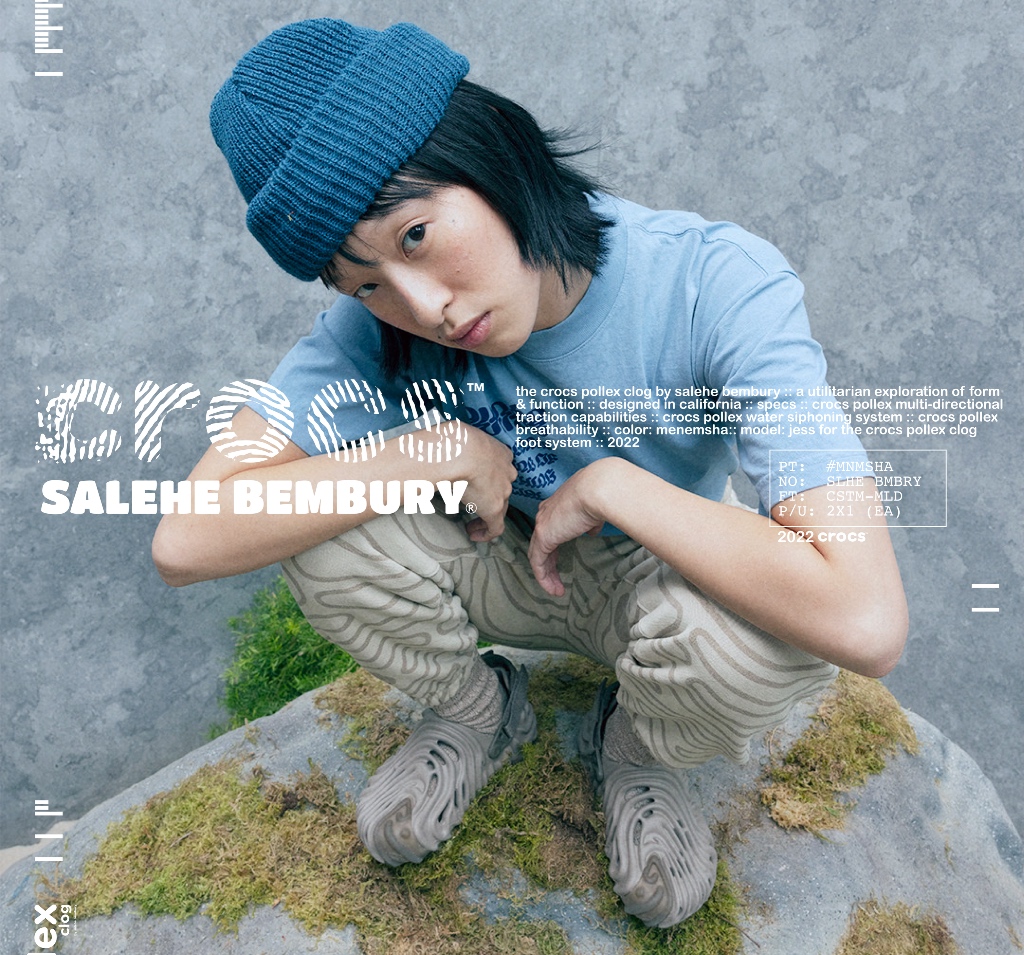 The Salehe Bembury x Crocs collection’s first drop will officially launch on Dec. 14 on Crocs.com. The $85 style, deemed the Pollex clog, revamps Crocs’ Classic clog silhouette with an allover texture. The swirling ridges that cover the shoes are actually based on the shapes of Salehe’s own fingerprints, creating ridges for greater traction.

The Pollex clogs also feature upper holes for greater ventilation, as well as Crocs’ signature textured footbeds for added comfort. They additionally include a new nylon take on the pair’s staple foam straps, which is both adjustable and removable to create a slipper style.

The Salehe Bembury x Crocs campaign has just debuted today well, featuring Cynthia Erivo and Jess Hu as models. The ads include the duo in a minimalist gray room, adorned with both modern and natural accents like rocks, foliage, an armchair and printer. Seemingly to mimic the style’s natural colorways and Crocs’ own modern approach to footwear, the campaign displays a merge of both as they coexist.

Those wishing to get their own Pollex clogs will have several methods of doing so. Both colorways will be available at specific wholesalers, with the Cucumber color way also available on Crocs’ own website. However, fans will also have the opportunity to enter a drawing from 11:00am EST on December 14—11:00am EST on December 15 on Crocs.com to purchase their own limited-edition pair. If they win, the individuals will be notified by Crocs.

Bembury has kept Crocs fans on their toes for weeks prior to the Pollex clogs’ release. The street style star previously teased the line throughout the fall season, revealing the Pollex’s dark green Cucumber and taupe Menemsha color ways in Instagram posts. There is also an undisclosed white color way that’s been crafted of the Pollex style, though its availability and release is unknown at this time.

Anticipation for the line has been building since Bembury announced that he’d be collaborating with Crocs in late July. Currently, fans can subscribe to Bembury’s mailing list on his website, Be A Spunge, for more details on the release.

Bembury is the latest collaborator for Crocs, which has become a go-to brand for a variety of collaborations in recent years. The comfortable shoe brand has created limited-edition shoes with Justin Bieber, Diplo, Post Malone, “Cruella” and KFC, among others.