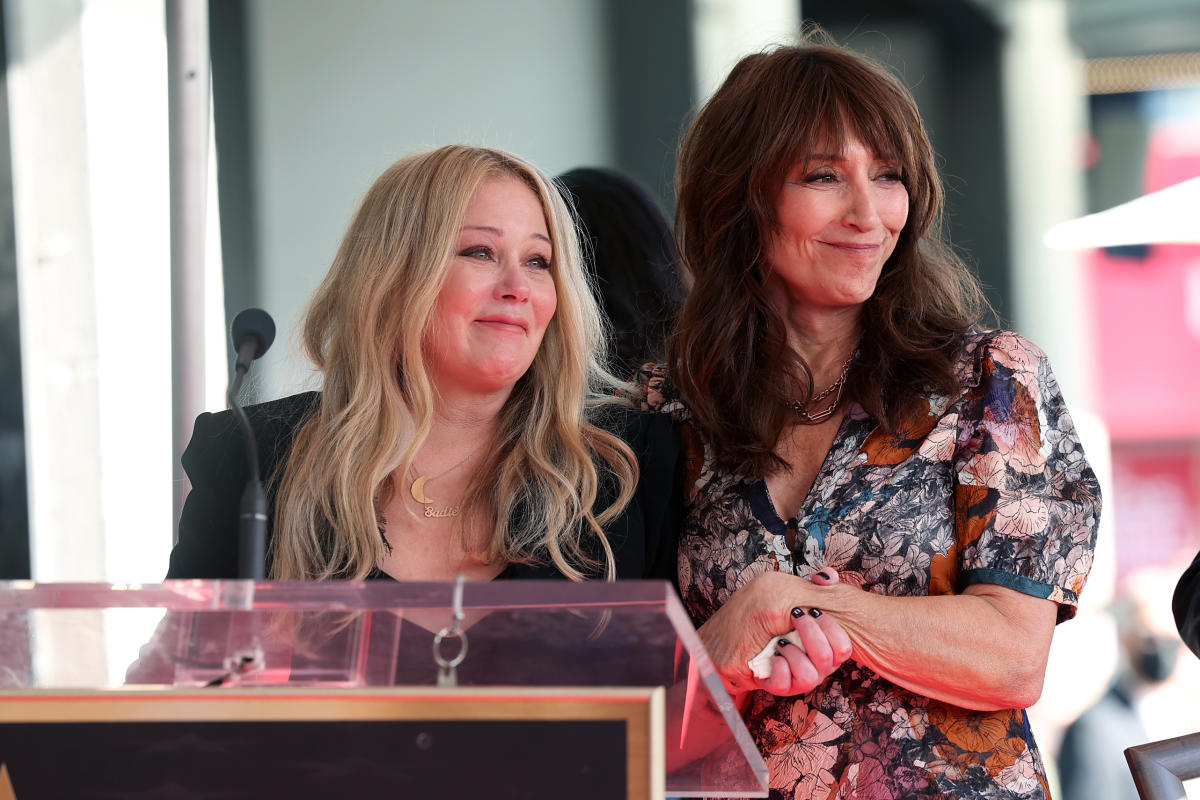 Christina Applegate was honored for talent and bravery as she collected her star on the Hollywood Walk of Fame.

The Dead to Me star, making her first public appearance since her multiple sclerosis diagnosis last year, debuted her walking stick at Monday’s event, but leaned on her Married … With Children TV mom Katey Sagal, who helped Applegate to the podium and physically supported her during her speech. She attended the event sans shoes to be more comfortable.

“I can’t stand for too long so I’m going to thank the people I really need to thank,” Applegate, 50, said at the start. As for Sagal’s presence, Applegate said Sagal was “just gonna be here” holding her steady, joking it was”so Katey to steal [my] thunder.”

Applegate — also known for the Anchorman films and TV’s Jesse and Up All Night, to name a few— cracked jokes during her speech and did not directly mention the disease of the central nervous system. However, she alluded to the diagnosis she received in the summer of 2021, referring to herself at one point as “the disabled lady.” Later, while thanking “the most important person in the world,” her daughter, Sadie, with her musician husband, Martyn LeNoble (who were both there), she said, “Thank you for standing beside me during all this.” Then, to the audience, she added, “Oh, by the way I have a disease. Did you not notice? I’m not even wearing shoes Anyhoo, You’re supposed to laugh at this.”

Applegate also suggested, as she’s hinted previously, that she’s done with acting as she navigates her health challenges. While thanking the stars who spoke on her behalf, she said, “I like that I started with you two — referring to Married … With Children‘s Sagal and David Faustino — “and ended with you two” — pointing to Dead to Me co-star Linda Cardellini and showrunner Liz Feldman — “and I thank you so much from the bottom of my heart. You are my people.” (Applegate has previously said she’d like to continue producing, but she can’t do long days on the set.)

Applegate said that growing up in L.A., and getting her showbiz start as a young girl, she always “effing” wanted her own star. Feldman praised her as a “comic genius and and one of the greatest actors of her generation.”

Sagal, whom Applegate still calls “Mommy,” it was revealed, spoke of Applegate’s grace and bravery overcoming her challenges, also including a breast cancer diagnosis in 2008.

“You know, sweetheart, some of us come into this life requiring broad shoulders because what’s coming at us needs support to bear it,” Sagal said. “Broad enough to hold what shows up. I’ve seen you — the high highs, the love and enormous success, coupled with extreme challenges. But you came in with those shoulders, and you bear the weight and you bend and you don’t break. I continue to love you, laugh with you and to learn from you. … You are not alone. We’re all here. We love you.”

Applegate was seated by her star — which is adjacent to those of Sagal and Married dad Ed O’Neill, who was unable to attend — as it was unveiled, playfully doing a little seated dance with her new cane that she shared a sneak peek of on Twitter last month. She later got down onto the ground for photos — solo shots as well as photos with her co-stars, past and present, and husband and daughter.

Applegate expressed nervousness ahead of attending the event, which was supposed to take place in 2020 but was delayed by the pandemic.

“Now my life is a different story,” the actress told Variety earlier this month. “People are going to see me for the first time as a disabled person, and it’s very difficult. So, for me, two years ago would have been so much better!” She’s spoken about her 40-pound weight gain to the New York Times, saying, “I want people to know that I am very aware of all of that.”

Applegate also spoke about her health, saying production shut down on Dead to Me for five months last year after her diagnosis. When she returned to the set, she needed a wheelchair to get to set. She had to be physically propped up for scenes. She napped during the day to get through it, but she was determined to finish the final season of Dead to Me, which premieres Nov. 17 on Netflix, and bring closure to fans of the show as well as to the cast.

As for the MS, Applegate told the New York Times she is “never going to accept” her diagnosis, adding, “I’m pissed.”