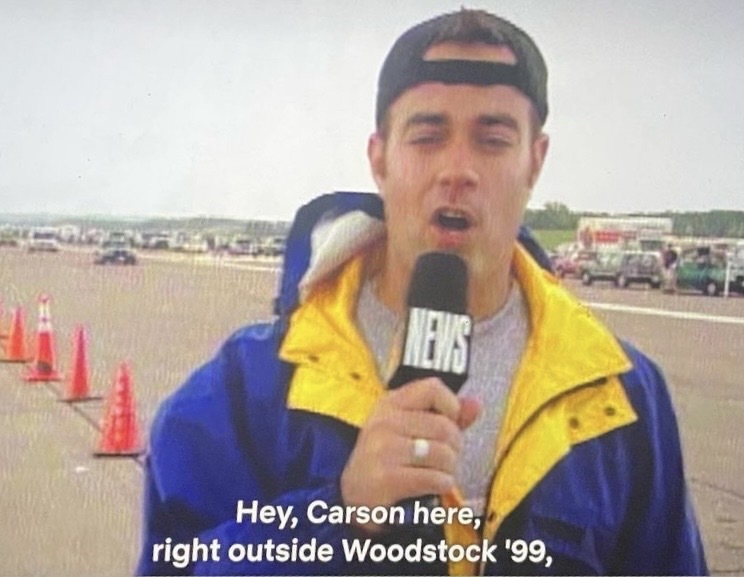 Carson Daly thought he was “going to die” at Woodstock ’99.

The music festival gone terribly wrong is the topic of another documentary. Appropriately titled Trainwreck: Woodstock ’99, the three-part Netflix streamer is about the mayhem in Rome, N.Y., now over two decades ago. Daly said since the doc came out, he’s been getting a lot of questions about being there, as host of MTV’s TRL in that era, so he was addressing it.

“All I can say is: I thought I was going to die,” said Daly, who is now covering entertainment news on the Today show. “It started off great, TRL Live from the side of main stage interviewing all the bands (like Jay from Jamiroquai) & then started getting pelted with bottles, rocks, lighters, all of it. It got insane fast.”

Daly, who included photos of things being thrown at him, said at nightfall as Limp Bizkit, with Fred Durst, played “Break Stuff,” “the prisoners were officially running the prison,” referring to the angry crowd. His MTV boss told the staff and crew backstage, “‘We can no longer guarantee your safety, it’s time to go!’ I remember being in a production van driving recklessly through corn fields to get to safety.”

He called the whole thing “so crazy & a blur now,” saying he felt like he “was in another country during military conflict.”

Now a father of four, Daly ended by writing, “I have so many fun memories from that era, this was not one of them. Needless to say, I haven’t taken the fam back to Rome, NY, for a vacation.”

The doc, directed by Jamie Crawford, looks at how the fest was the antithesis of the 1969 original with its message of peace on love. It was toxic on many levels — from mud on the grounds actually being human waste to many sexual assaults. There was further violence, looting, vandalism and fires.

Spin reported at the time that festivalgoers, fueled with rage over the conditions but also just acting out, hurled gay slurs at Daly and derogatory sexual remarks about his ex-girlfriend Jennifer Love Hewitt. One person “threw a cup of water in Daly’s face, and the beleaguered VJ mumbled, ‘Just tell me, man, that that wasn’t your piss.'” Daly’s face was the target of many overpriced plastic water bottles.

Earlier this week, WWE wrestler Mike “The Miz” Mizanin confirmed that he was part of the crowd after footage him — shirtless and screaming “Woodstock ‘99, baby” into the camera — was included in the doc.

“Before The Real World, 18-year-old Mike still knew how to find the camera. Never knew this footage existed, had to do a double take,” he wrote on Instagram, seemingly as surprised as the eagle-eyed viewers who spotted him.

Daly participated in the 2021 HBO Max documentary Woodstock 99: Peace, Love and Rage last year. He discussed it at the time on Today, saying the festival has been referred to as “the day the ’90s died.” He continued, “Before there was the Fyre Festival debacle,” that other colossal mess that landed organizer Billy McFarland in prison, “Woodstock ’99 was known as one of the biggest festival failures of all time.”