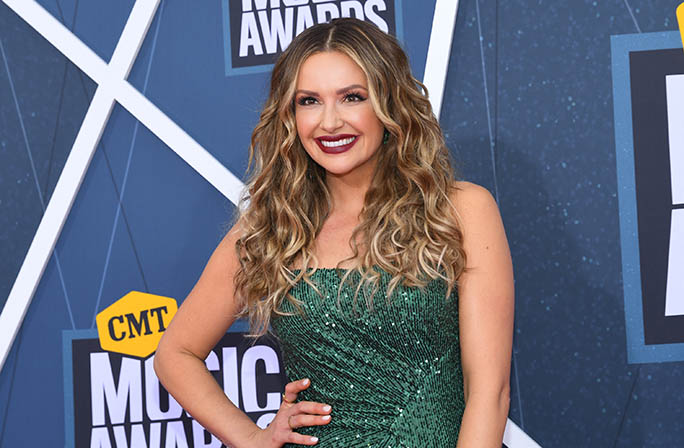 Carly Pearce stepped out in a head-turning outfit at the 2022 CMT Awards held at the Nashville Municipal Auditorium on Monday night. The “I Hope You’re Happy Now” singer wore a strapless glittery green gown. The form-fitting dress was complete with a risky thigh-high side slit and ruched detailing on the bodice.

The country music powerhouse parted her hair in the middle and styled her blond tresses in waves. Pearce rounded out her look with winged eyeliner and a bold red matte lip. The award-winning songwriter tied her look together with green sandals by Stuart Weitzman. The high heels featured a thin strap across toe and around the ankle.

Without any hesitation, Pearce hit the stage with a fiery performance of her post breakup anthem, “Diamondback.” The songwriter swapped her glittery gown for a white rhinestone-fringe ensemble. The  mini dress had gold snake graphics on the midsection and gold tassels on the insides of the sleeves. While her footwear was not visible, other photos show the songwriter onstage in gold boots.

The 2022 CMT Awards celebrate the top music videos and television performances by country musicians. This year’s ceremony, broadcast from Nashville, will be hosted by Kane Brown, Anthony Mackie and Kelsea Ballerini. The event also includes numerous star-studded performances, including Carrie Underwood, Miranda Lambert, Keith Urban. Nominations are led by Brown with four — including video of the year — as well as Ballerini, Mickey Guyton and Cody Johnson with three each. The show will be airing live from CBS and streaming in Paramount+ at 8 p.m. ET.

Discover more celebrity arrivals at the 2022 CMT Awards in the gallery.