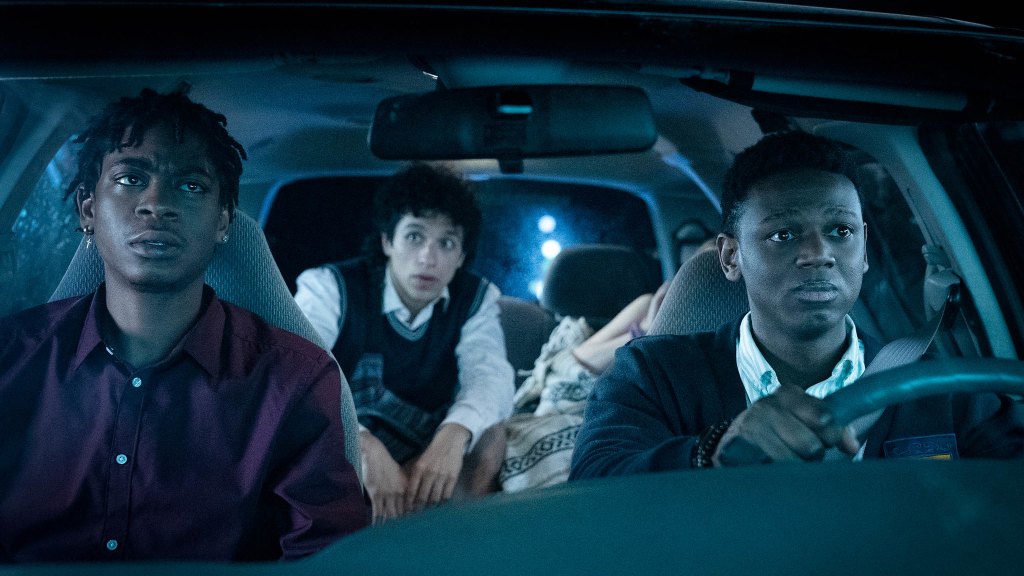 What if there was more to the Goldilocks story?

Picture this: when the three Bears (who are in college) get home, Goldilocks has eaten all the porridge, got drunk, and is now passed out on the living room floor. However, instead of doing something about it, they drive around town for hours arguing about whether they take her to the hospital or leave her on the front doorstep of a frat house because they fear police retaliation.

I’ve just summed up director Carey Williams’ new film Emergency which is having its debut at Sundance 2022 on opening night in the U.S. Dramatic Section. Starring RJ Cyler, Donald Elise Watkins, Maddie Nichols, and Sabrina Carpenter, these college kids engage in errors without the comedy. This movie makes it difficult to become engrossed in its social commentary without feeling it’s making a mockery of its message. Maybe that’s the point? The film is all over the place, and the payoff doesn’t hit you in the feels as it should.

Emergency starts with friends and roommates Kunle (Watkins) and Sean (Cyler) in the lecture hall, listening to their professor use the N-word freely as she gives a “lesson” on what the word means. The duo have different opinions on the matter. Kunle thinks she wasn’t malicious, that there was a point to what the professor was saying. Sean believes it’s wrong and the school should fire the teacher. These two are friends, but they are two different people. Kunle is preppy, intelligent, and going to Princeton for biology, and Sean wants to get high and party. The plan for the night is to hop from frat house to frat house so they can get drunk, high, and find girls.

After spending some time in the school biology lab, the two go back home and see a young blonde girl lying unconscious on their living room floor. Carlos (Sebastian Chacon), the third roommate, is getting high and oblivious to the discovery while sitting in the backroom. This girl, who the guys nickname Goldilocks, but whose real name is Emma (Maddie Nichols), is knocked out and wasted. What do the three do? Sean is scared to call the police because he’s afraid the cops will suspect them of wrongdoing. The trio decides to drive the girl to the hospital. They change clothing to look posh, so they don’t draw attention to themselves while driving. Hijinks ensue as the three college students try to get this girl to safety while avoiding suspicious white people and law enforcement.

The whole N-word scene took me out of the experience which was only five minutes into the movie. Where was this all going? It isn’t until 40-minutes in that it gets interesting. I mean, how can these three young men of color be good Samaritans without putting themselves in danger? Then I discovered the film isn’t about what the three young men decide to do, but about teaching Kunle a lesson. He’s under the impression that things can’t be that bad for Black people in America, right? Wrong. The poor kid learns the hard way that his utopian world is just in his head because no matter what, his smarts and preppy look won’t save him from systemic racism.

The racial power dynamics on display in Emergency are the stuff of nightmares, and things get especially tense when the unconscious girl’s sister Maddy (Carpenter) and friends spot her in the back seat of Sean’s van. Spouting assumptions, generalizations, and stereotypes along the way as they try to track her down it’s cringeworthy to hear and watch. With as serious a premise as this is, it’s executed so haphazardly like a racially charged National Lampoon movie.

How do you turn something like this into a comedy? I get that screenwriter KD Davila is trying to merge genres and ideas, but in making racism the butt of the joke, they have to be funny, not traumatizing. The story has to provide characters to care for, not characters that repel the audience. Cyler is the saving grace because his comedic timing is always on point. However, he’s given too much comedic responsibility because when he’s off-screen, the movie implodes.

Who is Emergency for? Who is the target demographic for this?

These types of films can be grating because they tackle so many issues at once instead of perfecting one concept and building a world around that.

There is some magic here, but the misplaced laughs and insufferable characters make it arduous to connect with the film on any level.

Emergency opens via Amazon Studios on May 20 in theaters and debuts on Amazon Prime on May 27.