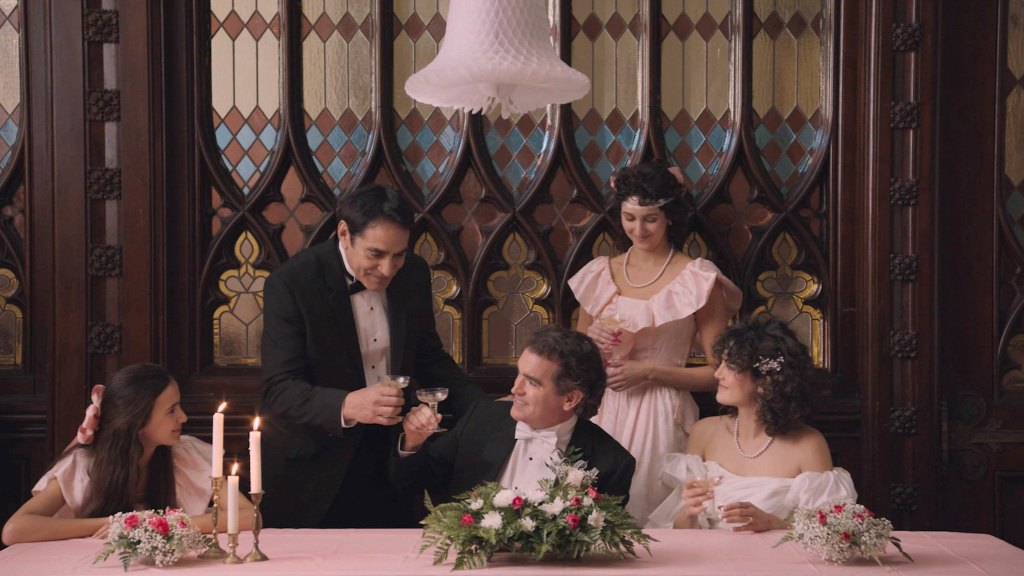 Rarely has a filmmaker kept his central character at such a distance as writer-director Ricky D’Ambrose does in The Cathedral. This is clearly an autobiographical work in some very important ways, and no doubt a purging of some demons as well. And yet the kid here, whose life the film follows from birth to his acceptance at college, has very few lines of dialogue and for the most part remains a cipher. All the same, this is a penetrating look at childhood that, distinctively, focuses more than anything on the foibles and shortcomings of the child’s parents, particularly his father.

Workshopped at the Biennale College Cinema program in 2020-2021 and world premiered at last year’s Venice Film Festival, this fastidiously crafted work creates a sharply selective portrait of clueless parenting that one can only imagine will require years of intensive therapy from which to recover—or, if D’Ambrose is lucky, perhaps making this film will have done the trick.

This is a particular, eccentric piece—one that, for example, uses “action” movie music to briefly backdrop a chess match–but its novel narrative approach and rigorous discipline will impress anyone who might think that just about anything that can be said about the trials of growing up has already been aired.

The passage from little kid to young adult is the ostensible subject here, but point of view plays an equally significant role in how you receive and digest all the information dispensed in this intensely personal autobiographical account of growing up in comfortable yet highly fraught circumstances.

A female narrator dispenses intimate information about the ostensible protagonist, Jesse Damrosch. He was, we are told, conceived on a Puerto Rican vacation in the 1986 and born the following year, just as his father’s brother died of AIDS or, as the family prefers to say, liver disease.

The narrative is comprised of unremarkable quotidian events presented in a dryly, strictly informative manner and set mostly in undistinctive modern dwellings occupied by unremarkable people hovering precariously on the lower edges of the middle-class.

Narration lays out the characters’ relationships, marriages, divorces, deaths, complaints and all manner of less-than-admirable behavior in a very straightforward manner. Noting all the grudges makes for a quick way of revealing the thin skins all around; resentments of one kind or another have a way of surfacing at the numerous banal social events the families and friends host.

The men are particularly prickly, with genuine hostility never very far from the surface; relatives are taken in, then asked to leave, grandparents die, certain individuals are excluded from funerals, we hear of children who haven’t seen their parents in years, and patriarch Richard (an excellent Brian d’Arcy James) remarries to a manicurist from Trinidad who hasn’t seen her own daughter in five years; he’s a man whose motto is, “You can’t trust anyone.” Snippets of real-life events—war in Libya, George W. Bush running for a second term, Ronald Reagan’s funeral—provide something of a time-frame.

What’s most distinctive about this sidelong coming-of-age tale is how it resolutely refuses to enter the head of the ostensible leading character, Jesse, who is clearly based on the filmmaker. Played at age 12 by the good-looking Robert Levey II and at age 17 by the exceptionally good-looking William Bednar-Carter, Jesse speaks very few words during the course of the film; he’s a generally agreeable sort, perfectly pleasant, but completely contained within himself, seemingly impervious to the sturm und drang stirred by his father in particular.

How Jesse could remain so calm and unperturbed by the disarray and negativity embodied by his father remains a mystery, even as it’s clear that D’Ambrose is using the film as an emotional purge to one extent or another. Jesse’s inclination toward silence and observation suggests he was saving it all up for the film his creator has now made in such an admirably disciplined way.

D’Ambrose has the technique and narrative instincts down; presumably next time we’ll see what else he has on his mind.