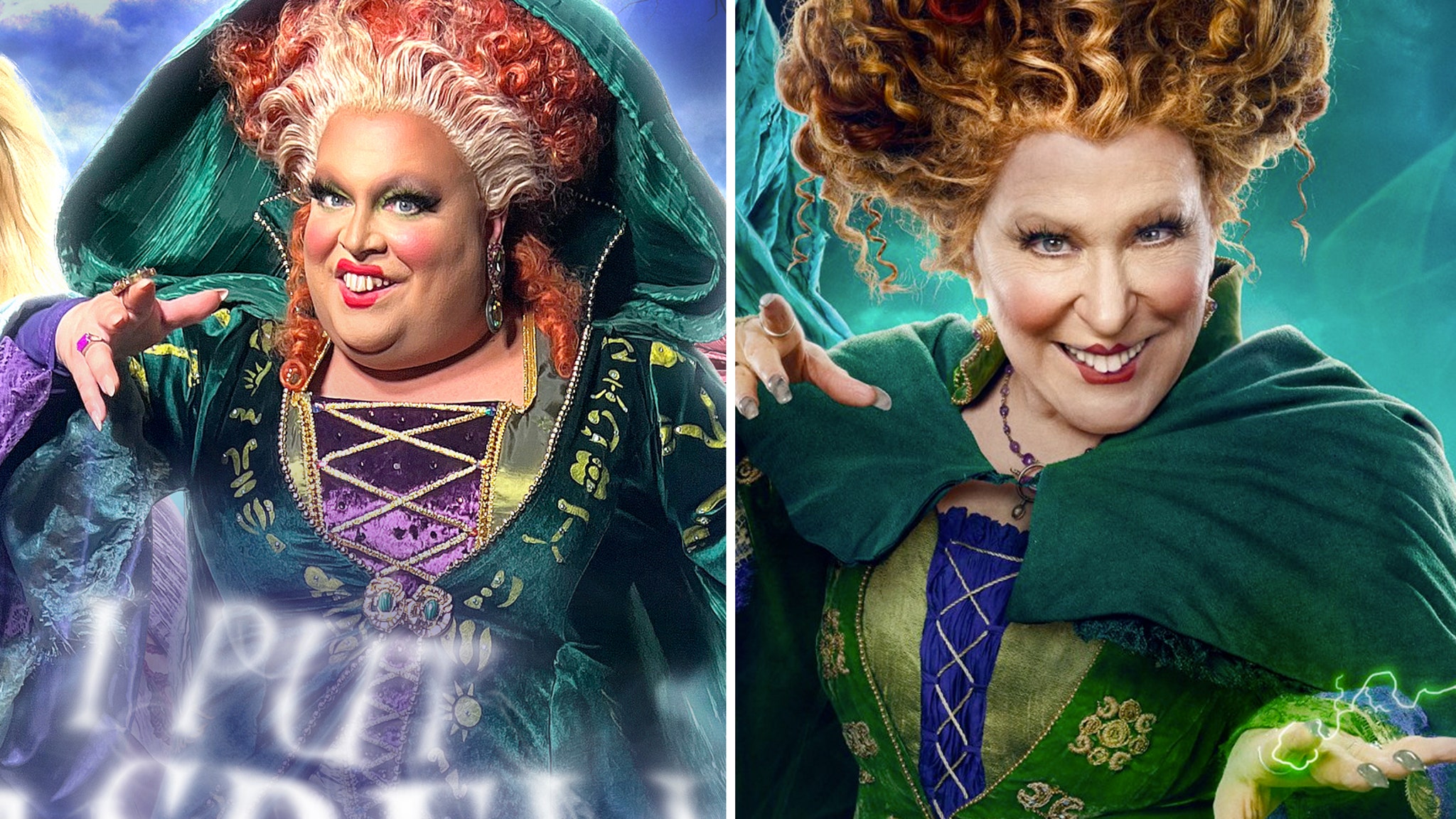 Minj plays a drag version of Winnie in the sequel — and said Midler “was very vocal about how much she enjoyed my interpretation of her.”

When “RuPaul’s Drag Race” alum Ginger Minj showed up on the set of “Hocus Pocus 2” shortly after losing “All Stars 6” to Kylie Sonique Love she probably didn’t expect to hear the words “You were robbed!” from the one and only Bette Midler.

But that’s exactly what happened, Minj told TooFab in an interview about her role in the highly-anticipated sequel dropping on Disney+ next week. 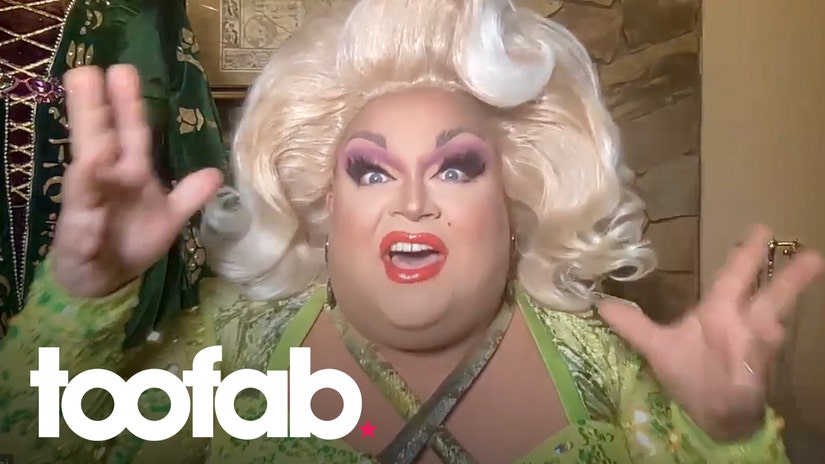 Minj and fellow “Drag Race” alums Kornbread and Kahmora Hall were all recruited to play drag performers dressed as the three Sanderson Sisters at a Halloween festival — where they come face to face with the OGs themselves on stage. According to Ginger, the sequel’s director Anne Fletcher reached out to her directly to appear in the flick, after the two previously worked together on the Netflix film “Dumplin’.”

“I was playing Ursula in this Disney Villains tour in the UK last year, it’s the middle of the night and my phone keeps blowing up. I’m like, ‘Why is Anne Fletcher blowing up my phone?’ I text her, like, ‘Girl, it’s three in the morning, what do you want?'” recalled Minj. “She’s like, ‘Ging, I created this role, I want you to come be a drag queen version of Winnifred Sanderson, you’re going to get in a fight with Bette Midler and I want you to give us a list of girls you would like to work with as your sisters.”

Ginger said she gave Fletcher a short list of names, which included both Kornbread — who previously appeared on Minj’s Wigs in a Blanket cooking show — and Hall, who she didn’t know personally but felt was someone who “really grasps how beautiful she is and but also how wicked and kind of vapid.”

“The next thing I know, I’m on set, dressed as Winnifred Sanderson with Bette Midler not ten feet away from me. It was the most surreal thing,” she continued. “[Midler, Sarah Jessica Parker and Kathy Najimy] didn’t give us a chance to be nervous the first day because the set we walked on was right after All Stars 6 finished and Bette Midler goes, ‘You were robbed!’ with those teeth and nails and everything.”

“They really set us at ease and made us think we were on their level. Which, PS, we definitely are not on the level of those three,” she added. “They made us feel just as iconic and you can tell they had not only an appreciation for what we are as drag artists, but who we were on ‘RuPaul’s Drag Race.’ You could tell they really dove deep.”

While she didn’t fan-girl out on day one, Ginger did get overcome with emotion when their time on set was coming to an end.

“It wasn’t until the week that we were there wrapping up, we’re all standing on the lawn of the place where we’re filming and they go, ‘One, two, thee, fly!’ and all three of them just take off flying over our heads and that was the moment where I just had tears streaming down my face,” she said. “Like, 9-year-old me is living their best live and dying all at the same time. I never thought I would be part of something so big, it’s still so big in pop culture, but particularly in the drag community, it’s something we really connected with over the years.”

A glimpse of that takeoff can be seen in the new featurette below:

“It was a real thrill to come back and play these characters.”#HocusPocus2, an Original movie event, is streaming September 30 on @DisneyPlus. pic.twitter.com/oFYFiinFIR

Ginger’s spooky season is filled with treats — not tricks — for “Hocus Pocus” fans, as she’s also launching a new drag tour inspired by the series and releasing her own cover of “I Put a Spell on You,” which Winnie sings in the first film. The tour, she said, got the seal of approval from Midler herself, something which gave her a real drive to do it.

“I never would have thought about putting together and entire Hocus Pocus tour, like a stage show, but Bette Midler was very vocal about how much she enjoyed my interpretation of her, so she gave me her blessing and kind of said, take this and run with it,” said Minj.

The tour, she explained, will reference both the original movie and its upcoming sequel, while telling a “completely original story.” She teased: “If you’ve ever wanted to know what the Sanderson Sisters sound like when they sing WAP, this is your chance.”

As for her “I Put a Spell on You” cover, Ginger said she decided to record a new version of the song after realizing “every drag show in every bar across the entire world” recreates the “Hocus Pocus” performance every Halloween.

“It’s always the same version, it’s the Bette Midler version, but we haven’t changed that up in 30 years,” she said. “Some of us like to sing it live and it’s not in the right key, so I thought, now’s a perfect time for me to take ownership on this, put my own little spin on it and do it as a love letter to the drag community, here’s something new you can take and do your production shows with this.”

Between the movie, tour and song, Ginger has clearly become a pro on all things Winnifred Sanderson — with TooFab noting she could add her to her Snatch Game arsenal should she ever return to the world of “Drag Race.”

“It never clicked in my head like, ‘Oh, this is something I should do,’ until I spent time around her. And then I was like, ‘I get you, I get your sense of humor and I think I can do this,'” she said. “You never know when they’re gonna call so I can go back again. I’ll do whatever. They keep calling, I’ll keep showing up.”

While she’s already appeared on the main series and two different seasons of “All Stars,” the franchise has continued to evolve with shows like “U.K. vs. the World” and “RuPaul’s Secret Celebrity Drag Race,” while the show’s contestants have also appeared on Ru’s “Queen of the Universe.” Ginger, it seems, is always down to return.

“I’ll do anything, honestly. I love being a part of Drag Race, I love the brand and people who are a part of it. It’s been a part of my life for almost a full decade at this point, so it’s hard to remember a time where Drag Race wasn’t an overarching factor in my story,” she said. “The one good thing about not winning, is that I can always go back again. As long as there is stretch fabric to be had, I will show up.”

Her version of “I Put a Spell on You,” meanwhile, drops September 30 — pre-save it here — while her Hulu special alongside Monét X Change, “Huluween Dragstravaganza,” premieres October 1.