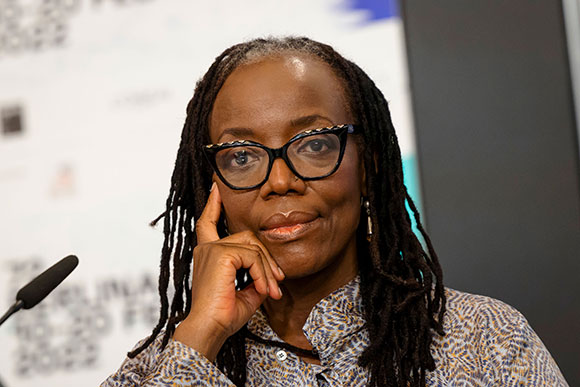 The directors of the Berlin International Film Festival are calling on the Zimbabwe government to clear filmmaker Tsitsi Dangarembga and journalist Julie Barnes or drop the case before an upcoming trial begins. Both women were arrested in Harare in July 2020 during a protest calling for for the release of journalists and for institutional reforms. Berlinale directors Mariette Rissenbeek and Carlo Chatrian said as “an institution that stands up for freedom of speech and freedom of artistic expression worldwide,” they were asking the government to end the charges against the women. “Both women have consistently campaigned for freedom in courageous and artistically compelling ways. The right to free speech is anchored in Zimbabwe’s constitution, and to deny that right to these women would be unconstitutional,” they added in their statement. Both are out on bail but were charged with inciting public violence, disturbing the peace and bigotry, as well as with violations of Covid regulations. They have been subpoenaed 26 times. Dangarembga, an author, German Book Trade Peace Prize winner and filmmaker was a member of the International Jury at Berlinale earlier this year.

Studiocanal CEO Anna Marsh was named “international distributor of the year at the CineEurope conference in Barcelona today. “Anna is a natural leader who has helped take Studiocanal — the European leader in the production and distribution of features films and TV series — to the next level and could not be more deserving of this award,” said Andrew Sunshine, president of CineEurope organisers the Film Expo Group. Laura Houlgatte, CEO of the Brussels-based International Union Of Cinemas (UNIC), also welcomed the award. “Studiocanal remains a crucial partner of European cinema exhibition and has shown itself to be fully committed to bring the best of European films to the big screen. This award recognises Anna’s leadership, her outstanding dedication and extraordinary passion for our industry,” she said. New Zealand-born Marsh joined Studiocanal in 2008 and steadily rose through its ranks to be appointed its CEO in 2019. “I share this award and this moment with my Studiocanal team, who I would like to thank for their loyalty, dedication, tireless passion and drive. I share this with our talent – our network of producers and filmmakers who we genuinely regard as family. And I share this with everyone in attendance at CineEurope,” she said.

Before jetting off to Cannes Lions in France, Netflix Co-CEO Ted Sarandos this week touched down in Jerusalem to meet students at Israel’s Sam Spiegel Film and Television School. The platform is supporting the school’s fledgling Series Lab initiative with the Netflix Series Development award for one of the projects being developed. “Your projects are going to change the world, it might take a year, it might take ten. But it’s going to happen. That’s why we are so proud of this affiliation,” he told the students. Sarandos emphasized that local language shows remained at the heart of the platform’s offering. “That’s something we are very proud of at Netflix – that we have pushed the experience of watching something not in your language into the mainstream. The biggest television show in the world last year did not come from Hollywood. It came from South Korea,” he said. Israel has delivered Netflix a string of hit series in recent years — from the story for Shtisel to Fauda to most recently Beauty Queen of Jerusalem. It’s no surprise the Netflix is now courting its upcoming storytelling talents.

British news channel TalkTV has drafted in the man who succeeded star presenter Piers Morgan as Editor of The Daily Mirror newspaper back in 2004 to turn around the network’s fortunes. Richard Wallace has taken on the new role as Head of TV at News UK Broadcasting, TalkTV’s parent. He’ll oversee all editorial output on the channel and oversee its P&L. A former SVP of TV and Production at Simon Cowell’s Syco Entertainment, Wallace became Editor of UK newspaper The Daily Mirror after Morgan was dismissed after publishing photographs that were later proven to be fakes. TalkTV’s ratings have been ailing following a strong start for flagship series Piers Morgan Uncensored on the channel’s opening night. News UK Executive Chairman Rupert Murdoch, who is reportedly said to be getting a divorce from wife Jerry Hall, is in the UK today, with The Guardian reporting that he’s using the time to personally address the TalkTV ratings malaise. Wallace starts his new role next month.

ITV is going deeper into Love Island. The British broadcaster has commissioned a further two seasons of the show, which is a smash with the UK’s young adult audiences. The new seasons will air on ITV2 and upcoming streamer ITVX in 2023, with a fresh batch of island hopefuls heading to South Africa early in the new year, before a second set return to the show’s main Mallorca villa base. The current season of the show’s launch episode took a consolidated 5M, making it the highest launch in three years. ITV Studios-owned Lifted Entertainment makes the show.  Paul Mortimer, Director of Reality Commissioning and Controller, ITV2, said: “Love Island has once again proved itself to be the nation’s favorite talking point across the summer, and we’re always blown away by the show’s ongoing impact and talkability amongst our younger audience. So, rather than just serving up a ‘Summer of Love,’ we thought we’d make 2023 the ‘Year of Love’ with two full seasons of the show.”