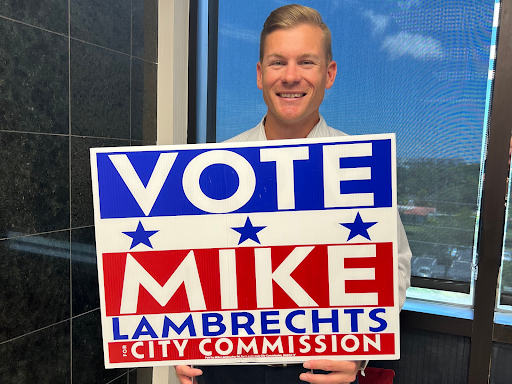 Many people share the sentiment that politics is a dirty game. This is what Mike Lambrechts, a candidate for commissioner in Fort Lauderdale (the commission is basically the city council), concluded when his campaign signs were stolen from his yard.

Lambrechts had placed a couple of campaign signs in his yard, and the yards of supporters, but several signs went missing. This is not an unusual occurrence in politics. Some politicians and their supporters are known to destroy campaign posters and steal campaign signs of their opponents. Their goal is to reduce the visibility of their opponent to impact their campaigns. An investigation revealed that was the apparent intent of Broward County realtor Jacquelyn Scott, who was running for the same commission seat as Lambrechts.

Distressed by the theft of his yard signs, Lambrechts embedded Apple Air tags on each of his campaign signs. The idea was to track any campaign sign that gets stolen from his yard. The trick worked, as Mike soon discovered some campaign signs were missing. After tracking the Apple AirTag, Mike was able to not only recover the signs but also identify the thief as his opponent, Scott. Now as Florida is diligently changing it’s image we have Florida Women getting caught thanks to a tracking device stealing her political opponents yard sign.

The AirTag is a tracking device manufactured by Apple The tag is small and can be attached to an asset for tracking purposes. The AirTag sends out a Bluetooth signal that can be discovered by nearby devices through the find my network function. To locate the tag, you only need to go to iCloud and click on the Find My app. This will open a map and show you exactly where your AirTag device is located. The Bluetooth signal is secure and the whole process is both encrypted and anonymous to protect the user. The best thing about it is that you don’t need to worry about battery life or data usage.

Where the Lost Campaign Signs Were Found

After discovering one of his tagged campaign signs was missing, Mike Lambrechts took action swiftly. He called the police and provided the relevant information to facilitate tracking and recovery of the missing campaign sign. The AirTag led police to the home of Jackie Scott in Colee Hammock. Jacquelyn “Jackie” Scott is also vying for the same Fort Lauderdale Commission position that Mike is campaigning for.

Ms. Scott was caught red-handed as Mike’s missing yard sign was in her green vehicle. Anyone found in possession of stolen property can be charged with the crime of theft regardless of how the property ended up in their possession. However, Ms. Scott used the classic defense of consent. She claimed that she had permission to take the yard sign. This forced Mike Lambrechts to swear and sign an affidavit that he did not permit Jackie Scott to take his yard sign.

While Ms. Scott was not arrested, city officials and the Fort Lauderdale police chief have been informed about what happened. The incident was also captured on police body cams, which means that any member of the public can get access to the footage. When reached for comment, Jackie Scott responded with the classic “no comment” response.

Brianna Ruelas is a Dallas-based Account Executive and Strategy Consultant at Grit Daily. She is a Reality TV Music Coach, Singer-Songwriter, and Best Selling Author to Make Reality TV Your Reality. Most recently, Brianna launched the Reality Singing Show Success Academy to help independent performing artists prepare for and maximize their experience on a reality singing show to create momentum in their music careers.