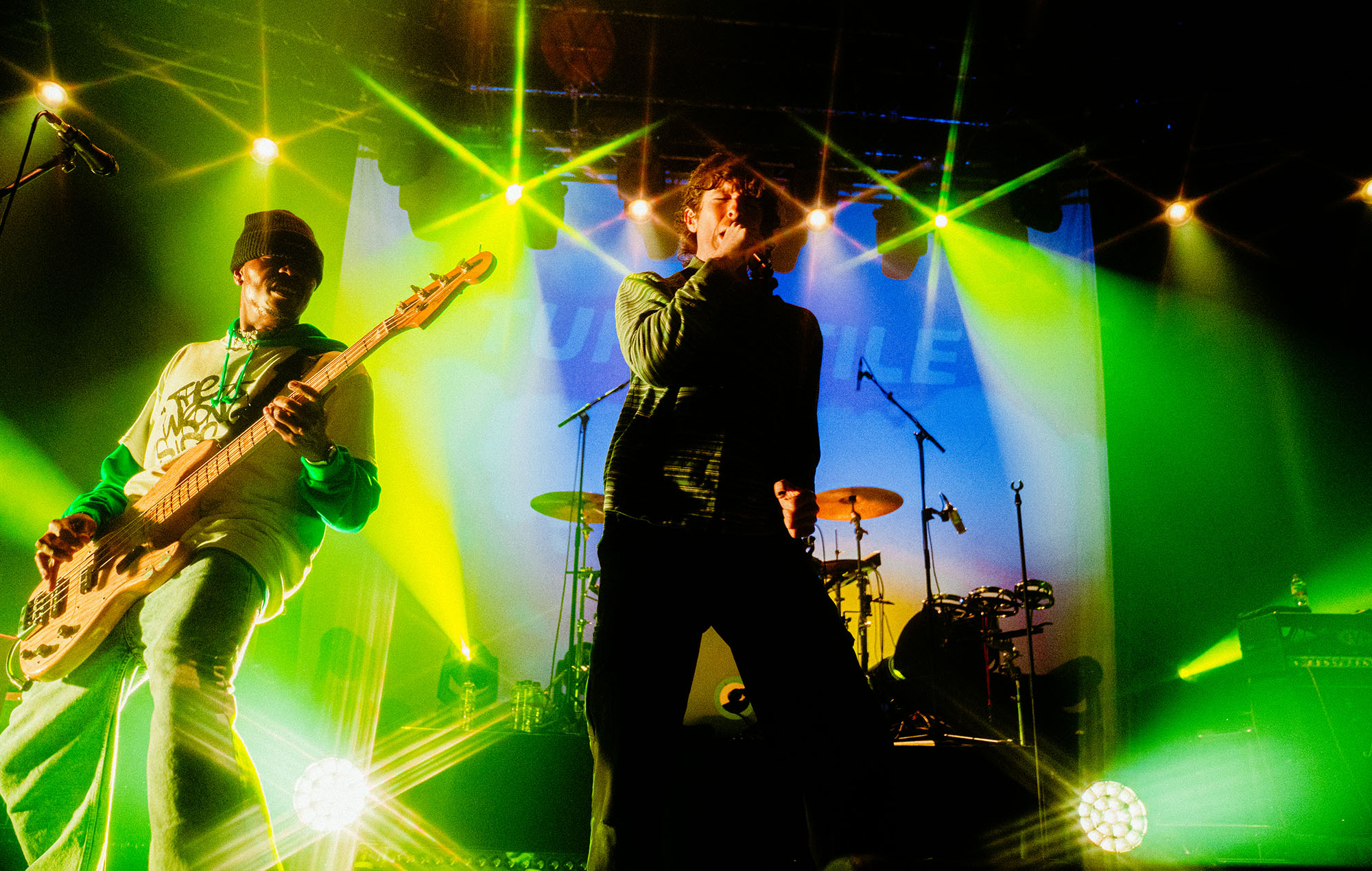 Whenever and wherever you joined the Turnstile journey – whether you’re a day-oner or a newcomer to their third album ‘Glow On’ – feels somewhat irrelevant tonight at The Roundhouse. The first of two sold-out gigs in London, it’s the ultimate party and celebration of a hardcore and rock band where all are welcome. The world has changed so much in the years since their first releases over a decade ago that there’s no time for gate-keepers or judgement heading into the band’s first UK jaunt in almost two years. If you’re here and a part of it, that’s all that matters.

The only constant has been the Baltimore band itself, an uncompromising crew who’ve remained steadfast in their sound and attitude, waiting for people to be drawn into their orbit rather than vying for attention. The run of shows they’re currently on will no doubt be the group’s biggest yet, although they keep any emotions decidedly controlled, and keep the focus on the mission in hand. This concentration only slips for a brief moment, in which they adopt mock British accents to declare that “we’re in Landaaaann.” Adele would be proud.

The band scorch through 20 songs in scarcely an hour, nodding to those raw early releases (‘Blue By You, ‘Fazed Out’, ‘Canned Heat’) and jolting into life the recent songs that are still working their way into the setlist, like 2021’s ‘Underwater Boi’ and ‘Mystery’. This is intense, sticky, brilliant stuff throughout, led by singer Brendon Yates, chiselled and topless – like Michelangelo’s David on a rowdy night off – and bassist Franz Lyons. The pair gleefully take turns dictating the madness, scaling speaker stacks and directing the traffic ahead of them. It’s one of those rare rock shows that feels like the centre of the universe, everything else spinning around it trying to latch onto the ride.

Throughout limbs fly and pints soar, and the reception to ‘Glow On’s material in particular is of note, indicating that not only are the long-time fans onboard, but newcomers are finding entry-points into the material; there is a pop edge to their yelp-along choruses (‘Holiday’), but the songwriting remains true to the band’s ethos (‘Don’t Play) and the scene’s heroes.

There’ll be a temptation to try and explain away how and why a hardcore punk band with its roots in a fervently DIY scene (now signed to Warner’s Roadrunner Records imprint, which they share with Slipknot) has entered mainstream spaces at this particular moment, but the answer is more straight-forward; they’re fulfilling a prophecy every kid starting out with a guitar dreams about, of playing hard, rocking out and having fun with your friends. There really isn’t that much more to it than that, and nor should there be.

This run of shows feel like the start of a new era for the band as they approach a summer of increasingly massive festivals and support slots. The crowds will grow and grow, but the spirit of inclusivity and joy will no doubt remain. It’s a snapshot of a band at a truly special moment.

‘Come Back For More’