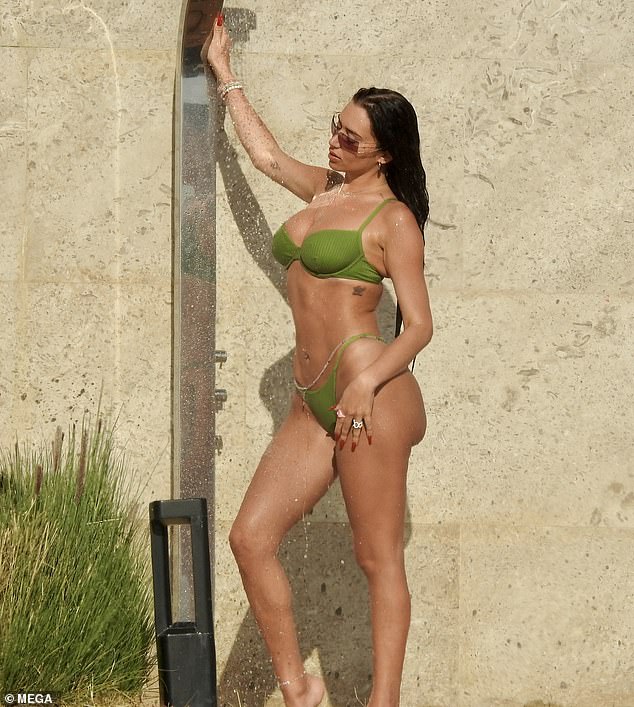 Kylie Jenner‘s best friend Anastasia ‘Stassie’ Karanikolaou looked incredible in a lime green bikini as she hit the beach over the Thanksgiving holiday.

The social media influencer, 25, showed off her voluptuous curves as she and a friend walked along the sand near the luxury Nobu Hotel in Cabo San Lucas, where her lookalike older sister Alexia recently got engaged in a romantic beach proposal.

The beauty accessorized her beach look with a pair of 90’s inspired sunglasses and gold jewelry.

Fun in the sun: Kylie Jenner’s best friend Anastasia ‘Stassie’ Karanikolaou, 25, enjoyed a day on the beach in Cabo San Lucas, Mexico over the Thanksgiving holiday

To the delight of her 10.9 million fans and followers she also has been sharing close-up looks and videos on her Instagram Stories.

The social media star tanned with a friend who was clad in a blue string bikini as the duo enjoyed the outdoor grounds of the hotel.

After playing in the sand, basking in the Mexican sun, and doing a few impressive hand-stands, Karanikolaou washed off her body and long dark tresses in a public shower. 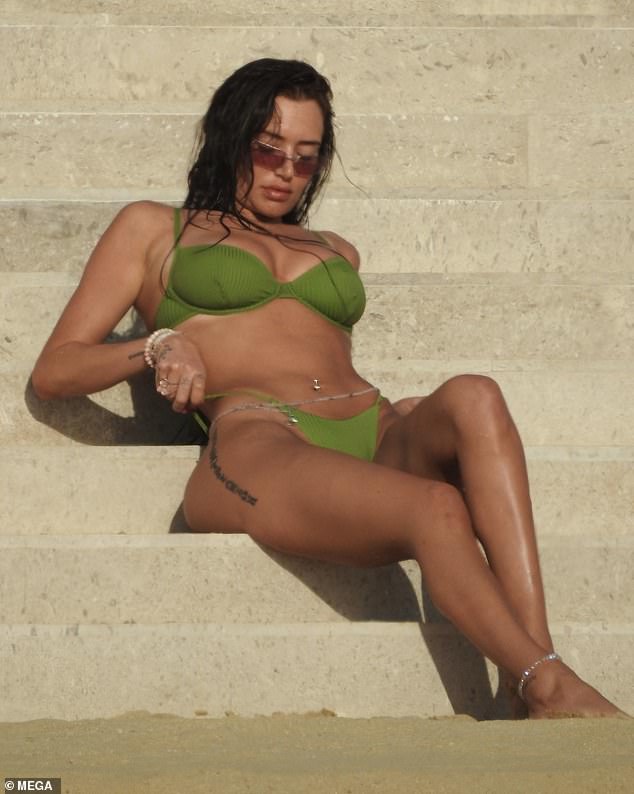 Tanning: The social media influencer, 25, showed off her voluptuous curves and trim abs while tanning at the luxury Nobu Hotel 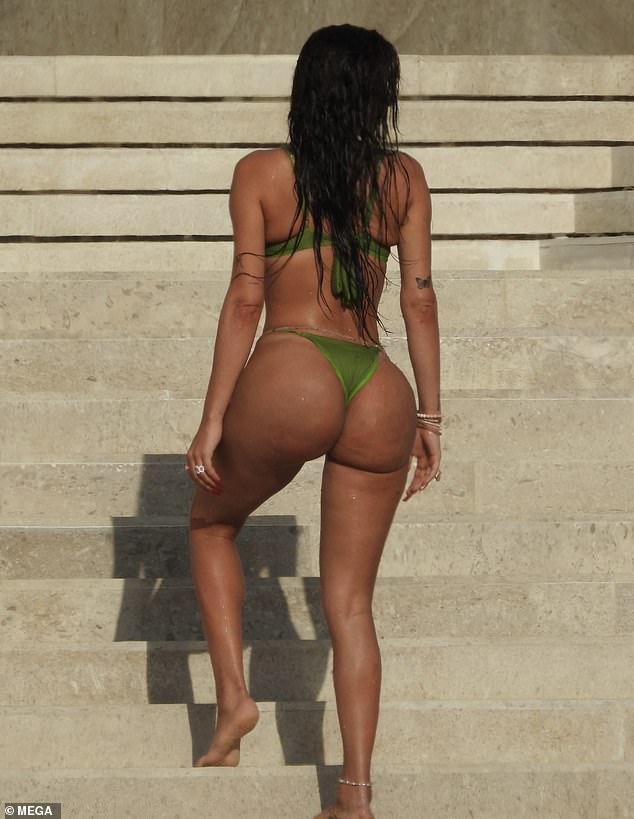 Cheeky: The entrepreneur showed off her figure in a small bikini that could barely contain her assets

‘i stay on ur mind,’ she captioned the sizzling photos.

In one she was seen washing off sand from her body underneath and outdoor shower. 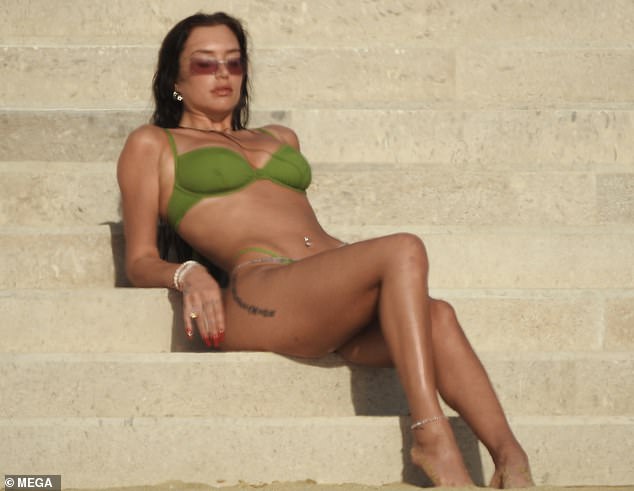 Greek goddess: The model turned entrepreneur soaked up the sun lounging in the sun 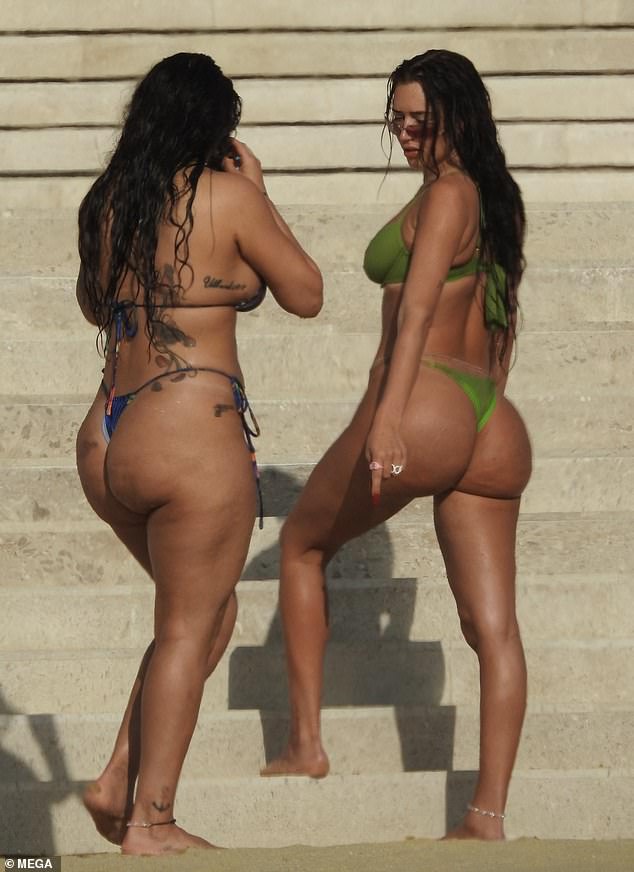 Getaway with friends and family: The social media star tanned with a friend who was clad in a blue string bikini as the duo enjoyed the hotel grounds 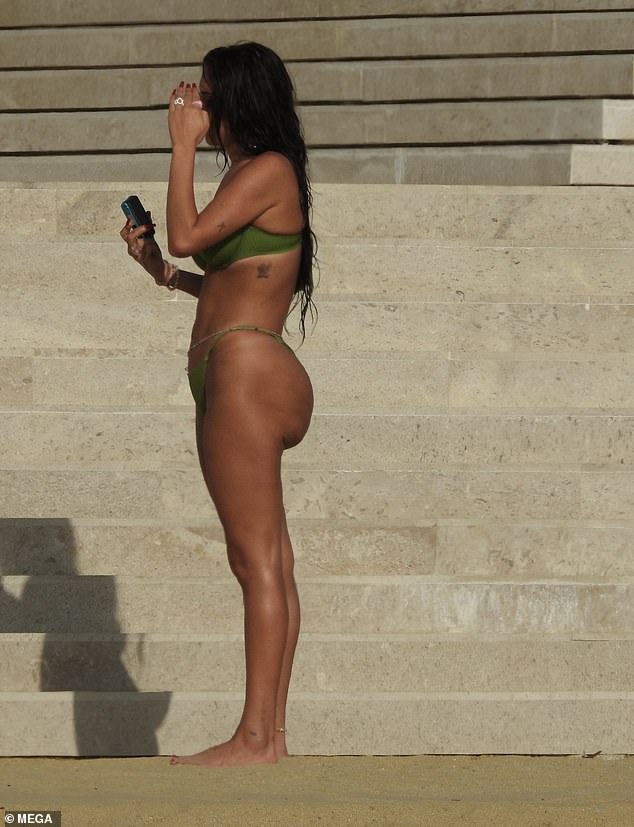 Glowing girl: The stunner recently celebrated the launch of her Stass by Boobytape product range of chest bronzers

Stassie has been getting playful with the camera all week enchanting her fans with a multitude of sultry looks throughout her get away.

The model has shared snaps of her impeccable figure all week as she spent time with her family on the beach and even while working out in the hotel gym.

The Southern California native also mugged for the camera in a black bikini on a yacht as it sped along the ocean water. 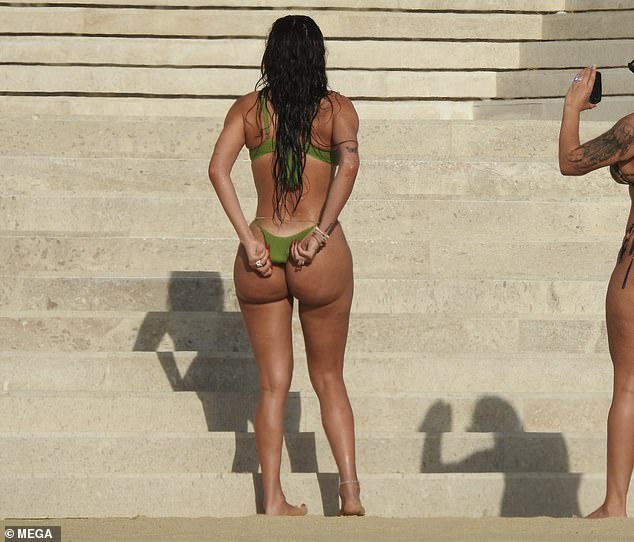 Sharing often: Anastasia boasts nearly 11M fans and has been sharing close-up looks and videos on her Instagram 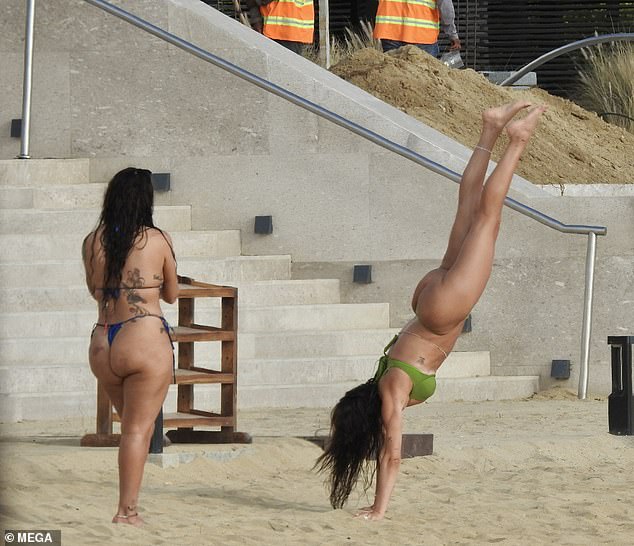 Having fun: The beauty and her friend appeared to have a blast on the beach 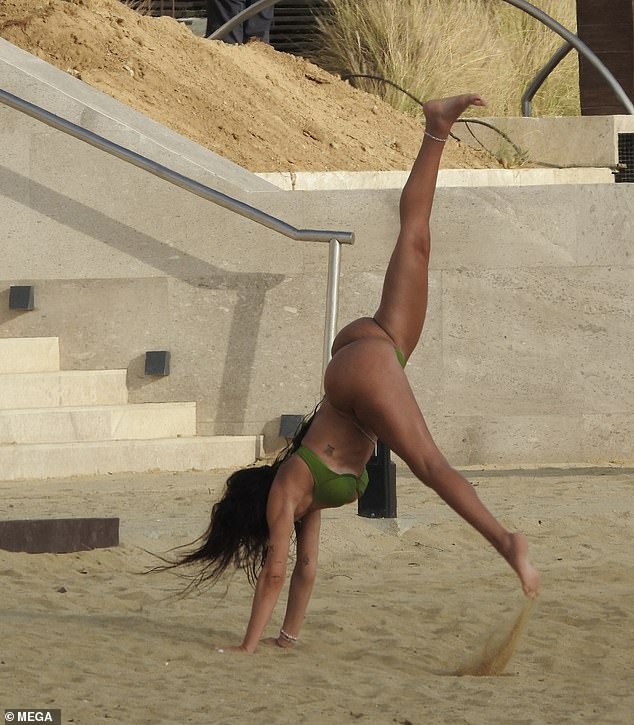 Playful: After laying in the sun the Karanikolaou practiced a few impressive hand-stands

On Thursday, Stassie had a lot to be thankful for as she celebrated Thanksgiving by taking to Instagram to announce that her sister, Alexia got engaged.

The star was seen celebrating the special moment with her sister, as they raised glasses of champagne in the air and laughed it up together.

Though childhood friends since they were 10, Stassie became the Kylie Cosmetics founder’s, 25, ride or die after her fallout with former best friend Jordyn Woods, 25.

Their relationship was severed after news broke that basketball player Tristan Thompson, 31 – who is Jenner’s older half-sibling Khloe Kardashian’s, 38, baby daddy – kissed Jordyn at a party. 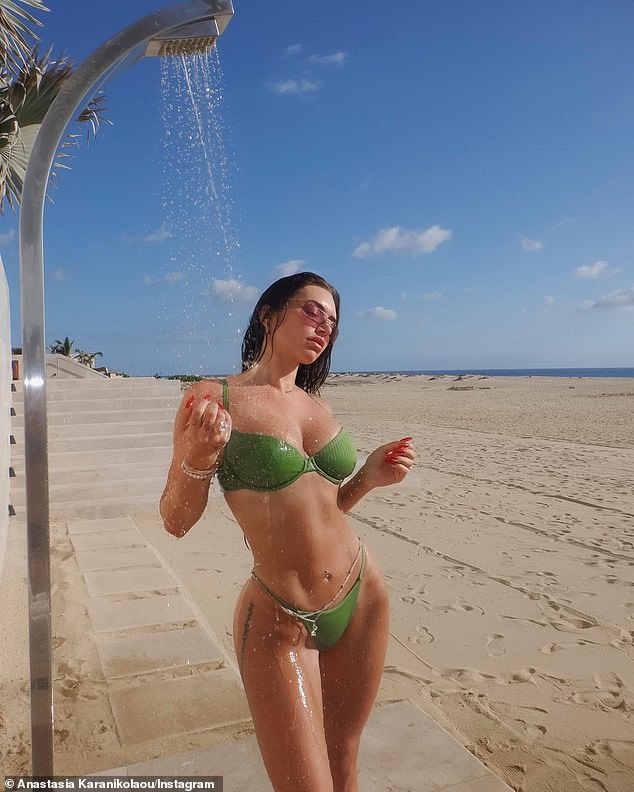 Sizzling: The beauty also took to her Instagram to post a few snaps in the sultry bikini

Breaking Instagram: ‘i stay on ur mind,’ she captioned the sizzling photos 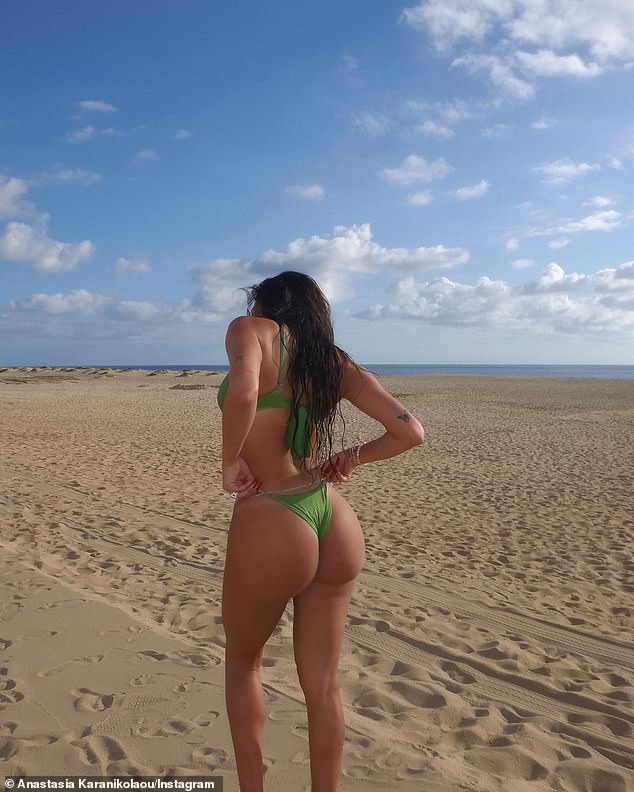 Thrilling: The social media phenomenon showed off her curves from multiple angles 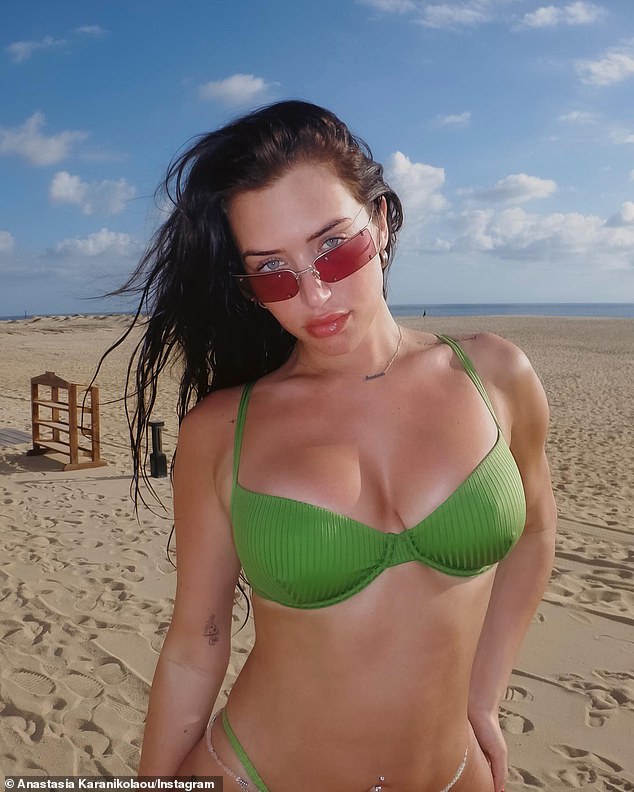 Earlier this year Kylie collaborated with Stassie on a Stassie X Kylie Collection with the famed Kylie Cosmetics.

During an interview with People, the media star opened up about her long-lasting friendship with the TV personality.

‘We know too much about each other. We’re stuck with each other forever,’ she stated.

She further explained that her mother had dealt with addiction growing up, and stated that her friendships are monumental in her life. ‘My friends have always been my rock. My friends are my family that I was able to choose.’ 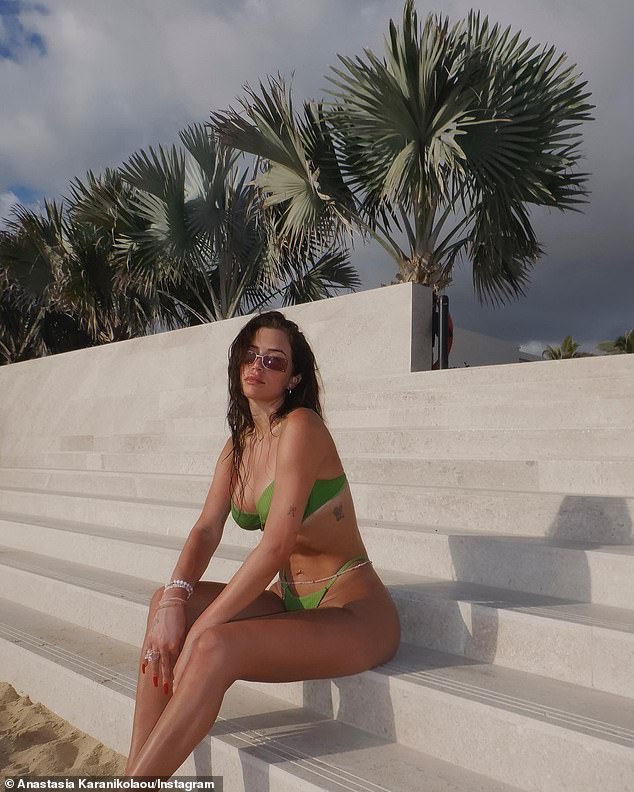 Relaxing: The beauty relaxed during her well-deserved getaway