Amanda Holden turned heads in a chic azure blue ensemble which showed off her toned legs as she left Heart FM in London on Monday.

The presenter, 51, flashed a hint of her underwear in the cropped blue blazer worn with a thigh- split skirt.

She accesorised the outfit with glossy jet black heels and a glamorous pair of sunglasses, paired with a studded leather clutch.

Looking good: Amanda Holden, 51, flashed a glimpse of her underwear in a plunging cropped blue blazer and thigh-split skirt as she left Heart FM on Monday 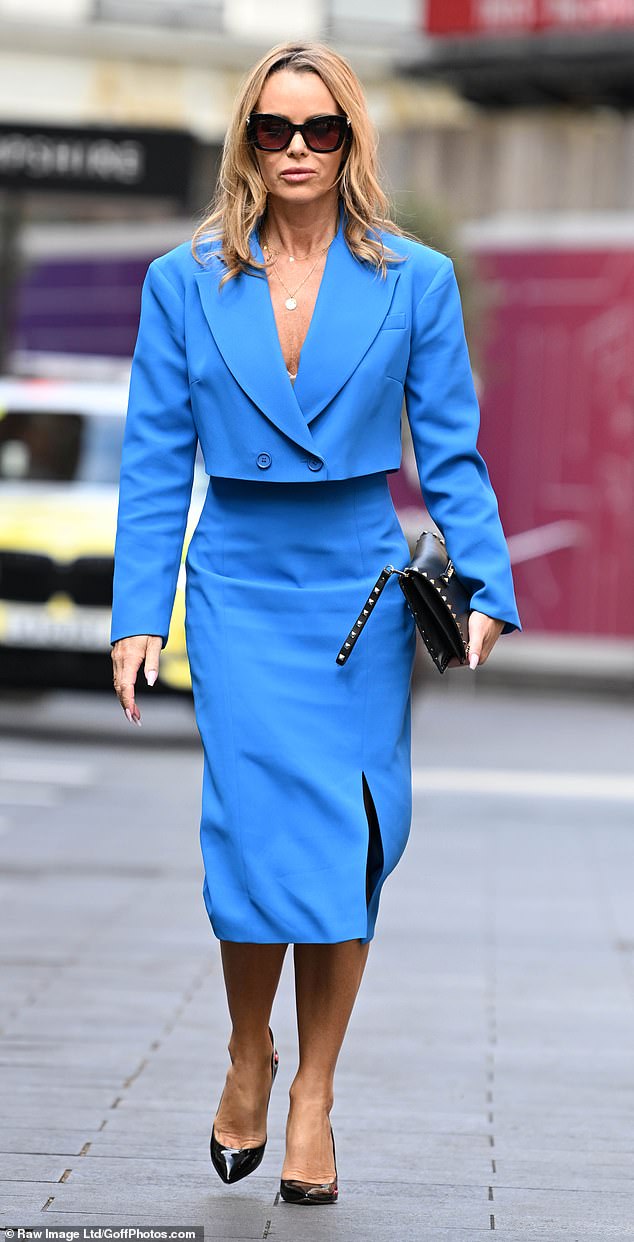 Woman in blue: The presenter paired her suit with patent black high-heels and a hand-held leather clutch

Amanda wore her blonde locks in stylish loose waves, which proved the perfect complement to her suit.

She wore a golden necklace and kept her make-up soft and natural with a sweet, pale pink lip.

Her nails, a simple nude shade, were long and glamorous, accentuated by slinky bracelets on one hand. 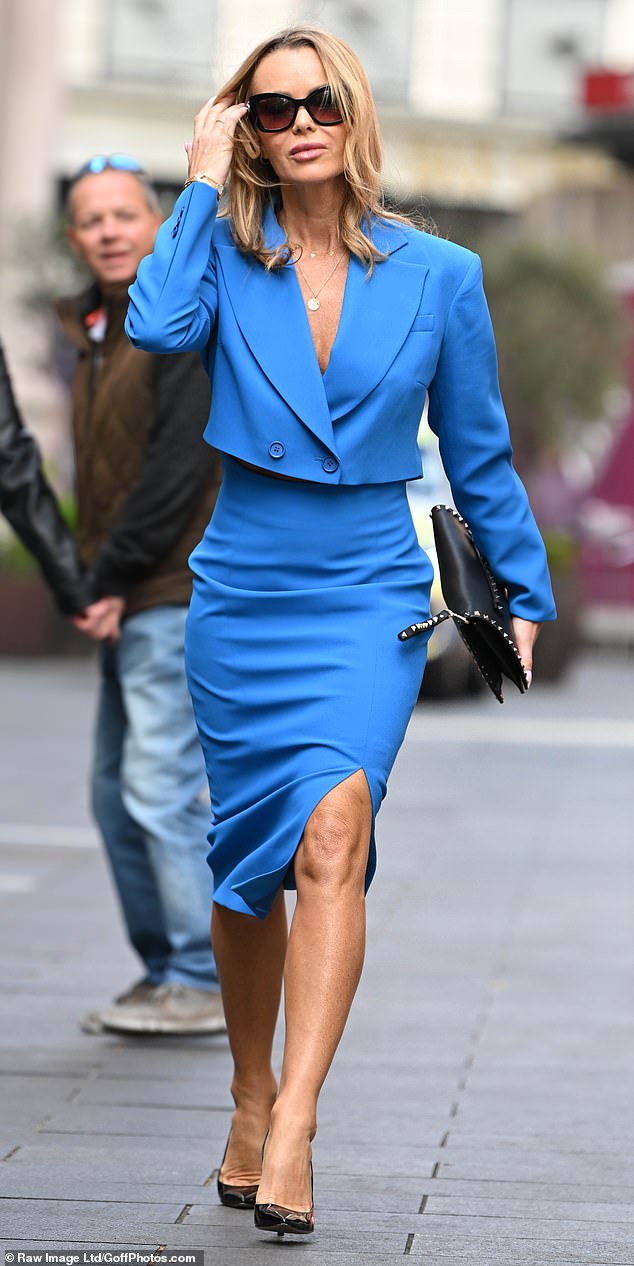 Legs for days: Amanda showed off her tanned legs in a long cobalt-blue skirt, worn with a cropped blazer 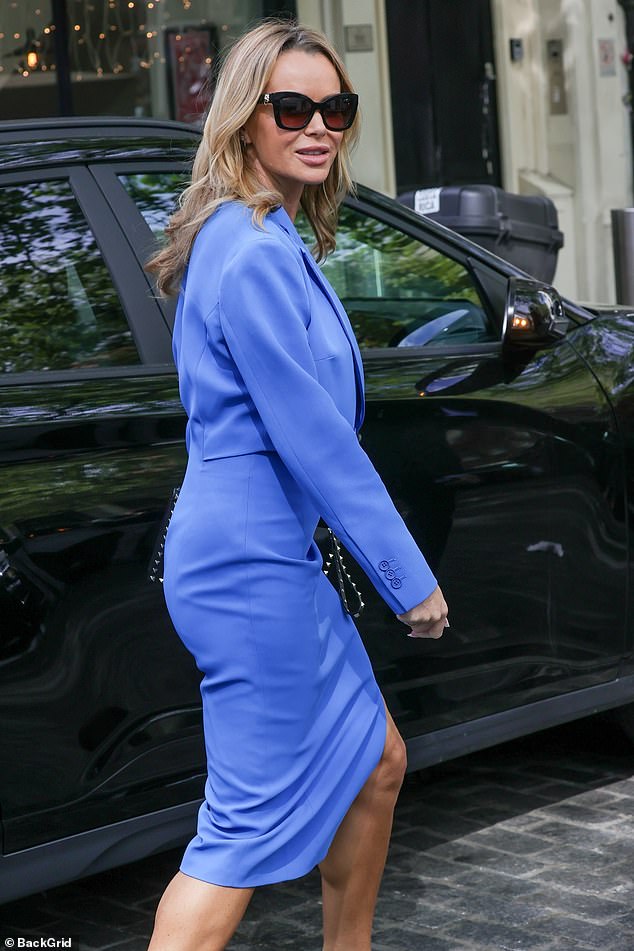 Leaving work: The presenter turned heads as she left Heart FM in a gorgeous blue suit and black heels

It comes as Amanda revealed her favourite moment of the latest series of Britain’s Got Talent involves a girl dancing to her song, in scenes which are yet to air.

She confessed that viewers will see her ‘get emotional’ when the auditionee uses her cover of Over The Rainbow from her 2020 album Songs From My Heart.

Speaking to The Mirror, Amanda divulged: ‘A little girl came out and danced to my version of Over The Rainbow! I was like, “Oh my God, that’s my song!” The proudest thing was saying to Simon, “That’s my version.” 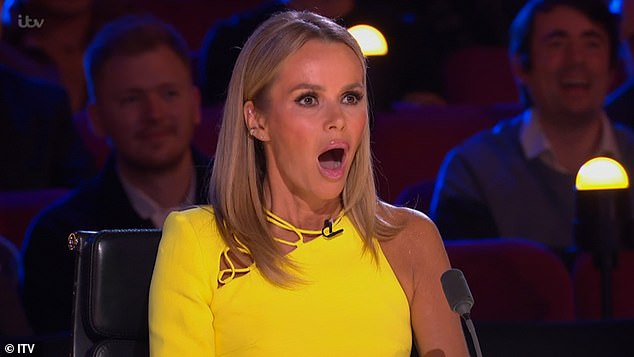 Sweet surprise: Amanda has revealed her favourite moment of the latest series of Britain’s Got Talent involves a girl dancing to her song, (stock image)

‘And then he made some cheeky joke about it. I couldn’t wait to text my husband to say, “Oh my God, this little girl just danced to my track!” as he masterminded the whole album. It was a real emotional moment and it felt like a dream.’

Amanda’s revelation comes as the talent competition has been criticised for having professional performers on the series.

Comedian Axel Blake was slammed by viewers after they pointed out that he had already gained mainstream success, even having his own stand-up show on Amazon Prime. 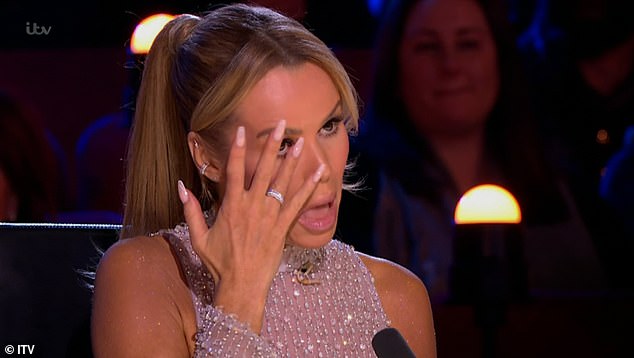 Proud moment: The presenter, confessed that viewers will see her ‘get emotional’ when the auditionee uses her version of Over The Rainbow from her 2020 album Songs From My Heart, (stock image)

Many drew comparisons between Axel and Loren Allred, who was already a famous singer that had been featured on the soundtrack of The Greatest Showman.

One person wrote: ‘I refuse to believe that the #BGT Golden Buzzers are real and spontaneous. Yesterday it was to someone who sang an actual song in Greatest Showman and has been in the music charts in the US. Tonight it’s a comedian who has a stand up show on Amazon Prime…’

Another echoed: ‘so last night there was a golden buzzer for a singer with a net worth of 2 million and a song in one of the biggest movies to ever exist and tonight’s golden buzzer was an award winning comedian who has an amazon prime show???? wtf is happening this series #BGT’.

And a third chimed in to say: ‘Apparently that comedian has already got a stand up show on Amazon Prime. Yet another wasted golden buzzer. It’s an absolute fix.’

Amanda defended the show, saying: ‘There are some professionals who would never have dared to come on the show before, but now find themselves in the same position as everybody else. The whole industry has been on its knees and I think they’ve seen us as a gateway to get back on stage for real, and actually, they had a great experience, a positive experience and have shown us stuff we’ve never seen before.’

She pointed out that at the same time they still have lots of people who are not professional performers, saying there’s a ‘real mix’ of people ‘from all different walks of life’. 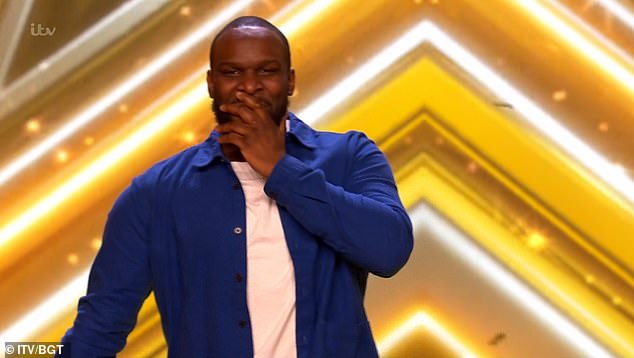 Angry: Amanda’s revelation comes as the talent competition has been criticised for having professional performers on the series