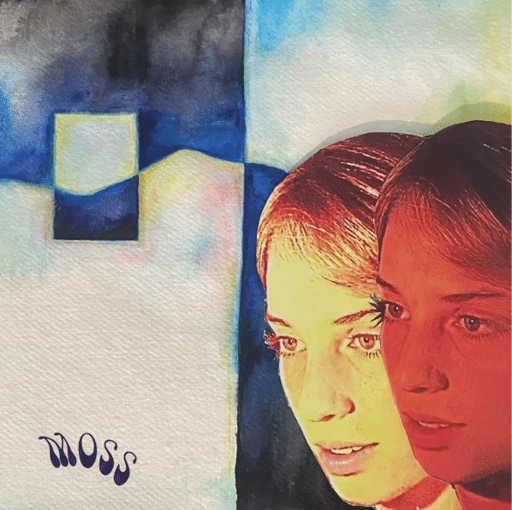 When Maya Hawke wrote about all kinds of love on her debut album Blush, she had a way of tangling it up in metaphor. “You can’t scare me away,” she sang on ‘River Like You’, “I’ve tamed the moss upon the rocks/ And molded the red clay.” The song stood out in a collection about growing up that was by turns wistful and whimsical, taking us through her formative years with diaristic lyrics that were sometimes directly plucked from those years in her life. Hawke revisits that metaphor on its follow-up, Moss, an album that reflects on the same period of time with the clarity of maturity and distance, which always feels greater than it might actually be. “In the acting world, you often get cast to play 14 at 16, 16 at 20 – what’s cool about that is you know a lot more about what it means to be 14 when you’re 16,” Hawke said in a recent interview. “So I’ve been taking that ethos and using it in my music.” The result is a wonderful record that showcases her growth, honing in a particular style of indie folk while keeping in step with Hawke’s poetic yet affecting songwriting.

Both sonically and structurally, Moss is more focused and cohesive than its predecessor, which used its variety of sounds as more of a playground to explore Hawke’s musical sensibilities. It began as a collaboration with Okkervil River’s Benjamin Lazar Davis, who is attuned to the rhythmic flow and emotional subtleties of Hawke’s poetry and helps bring it to life. As the songs bloomed into a full-length’s worth, they enlisted guitarist Will Graefe as well as Phoebe Bridgers collaborators Christian Lee Hutson and Marshall Vore; Graefe also provides additional vocals on a few tracks, and Hand Habits’ Meg Duffy even makes an appearance on ‘Backup Plan’. Jonathan Low, who mixed Taylor Swift’s folklore, also mixed Moss, which clearly aims to sound like a cross between that album and Punisher. Rather than trying to reverse-engineer what a fashionable indie album sounds like in 2022, though, Hawke and her collaborators use this palette to evoke the hushed intimacy and playfulness that run through her songwriting, each adornment making it feel like a deliberate expansion from her stripped-back debut.

For one thing, there are well-written and melodically resonant songs that wouldn’t feel out of place in either one of Swift’s 2020 releases. The pre-chorus of ‘South Elroy’ offers a glimpse of that Swiftian magic, but not enough to distract from the song’s own character; ‘Crazy Kid’ comes incredibly close to the Bon Iver duets but doesn’t feel like cosplay. Moss is at its best when it zeroes in on the unique idiosyncrasies and self-aware charm of Hawke’s songwriting. On ‘South Elroy’, she contrasts the light, delicate tone of the music with lines like, “When we fought and we fucked and we fought/ I always took your side.” ‘Sweet Tooth’ has an almost sing-song quality, but the joyful sentiment at its surface – “I’m grateful for everything you put me through/ It’s the only reason now I’m any good to talk to,” she sings, likely to her mother – is undercut by ambiguous, dreamlike images of decay and loneliness.

What marks Hawke’s lyricism is partly this knack for the surreal, and Moss is shot through with a kind of giddy imagination that’s delightful to follow. ‘Thérèse’ takes inspiration from Balthus’ 1983 painting Thérèse Dreaming and drifts into a hazy meditation on personal autonomy and public perception; like the most compelling songs on the album, it feels like a gentle if slightly uncertain dance. The story of ‘Bloomed into Blue’ is draped in alliteration, but Hawke cleverly saves the most piercing line for last: “I have beliefs in my brain, I’m a bottomless sea.” There’s a darkness edging through the album that rarely scans as simple melancholy, and the rich arrangements provide more than a decorative flourish. An electric guitar bleeds through ‘Luna Moth’, a song about inflicting pain that blurs the line between memory and fantasy; on ‘Sticky Little Words’, a bitter realization is accompanied by the rise of bass harmonics that create an uneasy effect.

Hawke juxtaposes these fluttery, restless moments with stark vulnerability and resolve. “I know you bleed glitter and have a heart of stone/ But all I really want is an actor of my own,” she admits on ‘Hiatus’, which notably shies away from using too much figurative language. Similarly, ‘Driver’ avoids alluding to the singer’s life in the spotlight through veiled references – what makes it striking isn’t that you know exactly who she’s referring to when she imagines her parents “loosely necking in the back of a taxi cab,” but the way she then traces her thoughts into the story. “Now I’ll tell you a secret,” she leans in at one point, though she’s clearly apart from whoever she’s talking to. “A secret that everyone already knows/ You remind me of my father/ Your attitude/ Your disheveled clothes.” Before you know it, she takes us back to that famous proverb – “a rolling stone gathers no moss” – and you wonder if freedom, this constant movement, leads to more happiness than alienation. Either way, Hawke doesn’t let the confusion restrain her. “Oh my god, I gotta slow it down somehow,” she reminds herself at the end of ‘South Elroy’, finding beauty in the stillness.