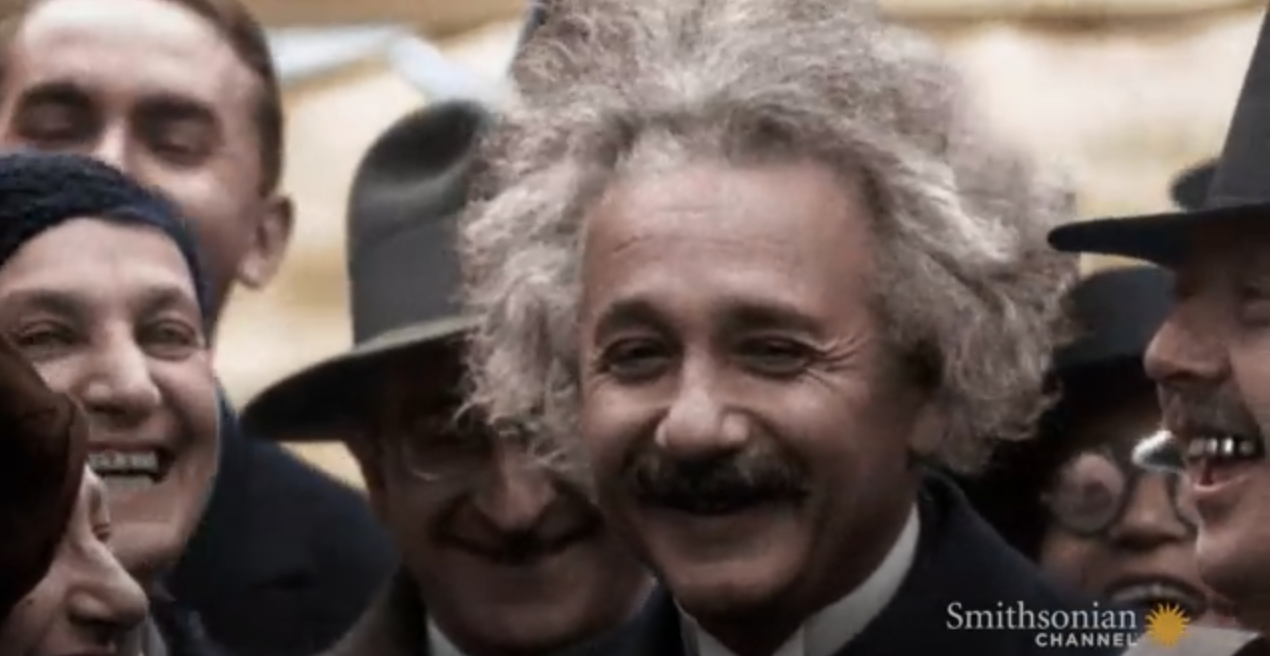 We all think we know just what Albert Einstein looked like — and broadly speaking, we’ve got it right. At least since his death in 1955, since which time generation after generation of children around the world have grown up closely associating his bristly mustache and semi-tamed gray hair with the very concept of scientific genius. His sartorial rumpledness and Teutonically hangdog look have long been the stuff of not just caricature, but (as in Nicolas Roeg’s Insignificance) earnest tribute as well. Yet how many of us can say we’ve really taken a good look at Einstein?

These four pieces of film get us a little closer to that experience. At the top of the post we have a colorized newsreel clip (you can see the original here) showing Einstein in his office at Princeton’s Institute for Advanced Study, where he took up a post in 1933.

Even earlier colorized newsreel footage appears in the video just above, taken from an episode of the Smithsonian Channel series America in Color. It depicts Einstein arriving in the United States in 1930, by which time he was already “the world’s most famous physicist” — a position then meriting a welcome not unlike that which the Beatles would receive 34 years later.

Einstein returned to his native Germany after that visit. The America in Color clip also shows him back at his cottage outside Berlin (and in his pajamas), but his time back in his homeland amounted only to a few years. The reason: Hitler. During Einstein’s visiting professorship at Cal Tech in 1933, the Gestapo raided his cottage and Berlin apartment, as well as confiscated his sailboat. Later the Nazi government banned Jews from holding official positions, including at universities, effectively cutting off his professional prospects and those of no few other German citizens besides. The 1943 color footage above offers a glimpse of Einstein a decade into his American life.

A couple of years thereafter, the end of the Second World War made Einstein even more famous. He became, in the minds of many Americans, the brilliant physicist who “helped discover the atom bomb.” So declares the announcer in that first newsreel, but in the decades since, the public has come to associate Einstein more instinctively with his theory of relativity — an achievement less immediately comprehensible than the apocalyptic explosion of the atomic bomb, but one whose scientific implications run much deeper. Many clear and lucid précis of Einstein’s theory exist, but why not first see it explained by the man himself, and in color at that?