Has there ever been a piece of footwear more deserving of its name than the Adidas Superstar? Aside from perhaps the Converse All Star, we’d have to say no.

Three bold diagonal stripes, sat against a backdrop of crisp white leather and brought to life by a trademark tonal rubber toe cap; this throwback favorite offers a masterclass in characterful subtlety that transcends time and trends.

It may look simple enough, but this unassuming low-top basketball shoe has shaken things up dramatically both on the court and off it. Now in its 50th year, the Superstar is widely regarded as having been a catalyst for sneaker culture, and its adoption by early hip hop style pioneers has only furthered its iconic status.

To mark its half-century, Adidas has announced collabs with the likes of Prada and model Blondy McCoy. And rumors are swirling about a new collaboration with Run-DMC, who famously wore the shoe in the 1980s.

The pageantry is fitting for what it one the most influential sneakers of all time. It remains largely unchanged from its original design yet is still as relevant as ever. Which makes it worth examining the finer points of this sportswear classic and why it’s worth adding to your footwear lineup.

The year 1969 wasn’t without its revolutionary events. Man set foot on the moon for the first time, the Boeing 747 took its maiden voyage and The Beatles made their final public performance on the Apple Records rooftop. In terms of footwear, however, the biggest news was the launch of a new low-top version of Adidas’ Pro Model basketball shoe, dubbed the Superstar (although the brand has dubbed 2020 as its anniversary year).

Design-wise, the Superstar was the first low-top basketball shoe to be constructed from leather; something which set it apart from the competition. Its success on professional courts, however, was largely down to the work of then Adidas consultant Chris Severn, who as well as helping to design the shoe, took it upon himself to market it at gyms. 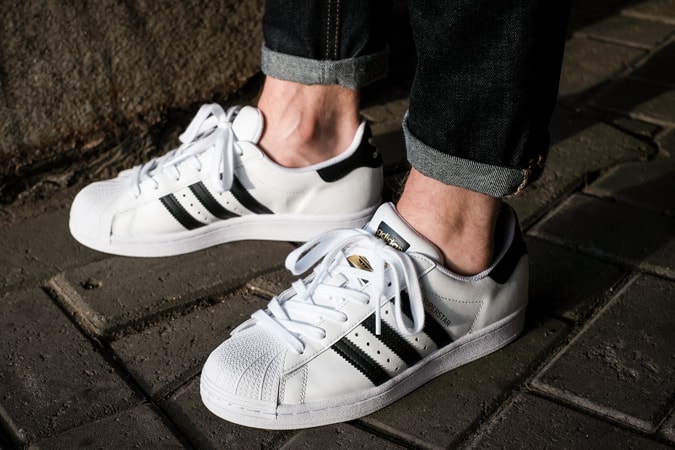 Severn implored players and coaches to try it out for themselves, knowing that if they did they’d never look back. “They had played in canvas all their lives; the Superstar looked completely alien to them,” he said in the book Sneaker Wars. “They weren’t getting paid by Converse; it was just a habit.”

Within its first few years, the Superstar was being worn by more than three quarters of all NBA players, who favored it for the firm hold offered by the leather upper when making quick turns on the court. It was a marked improvement on the canvas uppers that had dominated the market prior to its release.

As the years progressed, however, the Superstar got a taste of its own medicine. Advancements in footwear tech saw it become redundant on the court and, like the Converse All Star before it, it was destined to live the rest of its days as a lifestyle sneaker. As it turned out, this was the Superstar’s true calling. It wasn’t long before the ‘shell toe’, as it became known, was a prominent part of hip-hop culture, thanks in no small part to its adoption along with the Adidas tracksuit as a sort of unofficial uniform for genre-defining group Run DMC.

Run DMC’s love for the superstar and the resulting track My Adidas really cemented the Superstar as a cultural icon and brought it to a wider audience. Today, it’s arguably better known for its links to hip-hop than it’s time as a basketball sneaker and it remains one of the most popular shoes Adidas has ever produced.

What Makes The Adidas Superstar Great?

The Superstar’s enduring appeal lies in the fact that it manages to be simple, almost minimalist, without being boring or lacking character. Its crisp, clean upper is punctuated only by Three Stripe branding to the sides and a Trefoil logo to the heel, but the distinctive rubber toe cap gives the shoe a definite edge when pitted against other similarly minimalist sneakers. It’s different without being obnoxious; something that works in its favor when it comes to versatility.

Tailoring aside, this is the kind of sneaker that can work across the entirety of your wardrobe. It’s a solid day-to-day option and one of those rare shoes that has a way of getting better with age. Plus, it won’t bankrupt you, which is always a bonus.

How To Style The Adidas Superstar

The simplicity of the Superstar makes it a dependable everyday shoe. It’s the sort of thing you can throw on with pretty much anything without worrying about how it’s going to look. That said, it is particularly well suited to casualwear and goes very nicely with the right pair of jeans, making it a handy weekend shoe.

We’d recommend keeping things simple. A plain crew-neck sweatshirt and selvedge denim combination is a safe bet. Keep it relaxed with light outerwear, like a coach or bomber jacket, or dress it up with a mac or a wool overcoat on cooler days.